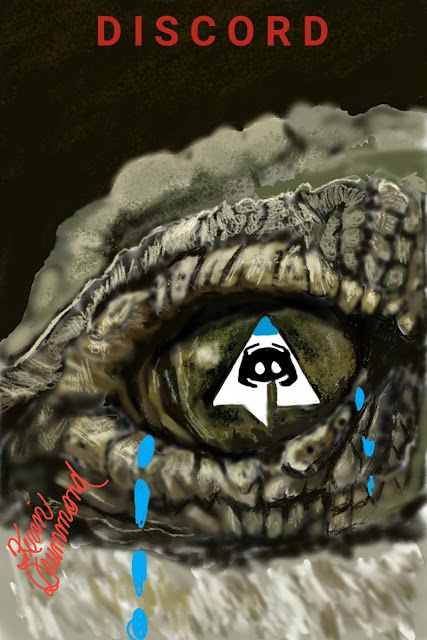 What is the Discord Group?
The Discord Group (DG) is a group of 20-30 PenUp users whom have taken their friendships on PenUp into a group on the gaming app, Discord.
From there, they plan attacks, they plan defenses, as well as discuss and share strategic information for the targeting of specific individuals.  The specific act of trolling is their primary objective. But, publicly shaming these targets, as well as those whom defend their targets from these efforts, has become highly prioritized among the members of the DG.


Besides sexual predation on PenUp, the DG is the worst thing about PenUp for ordinary users.


Are all DG members bad?
Not all of the DG is engaged in the act of creating tension, and threatening innocent PenUp users. But, the fact that these attacks are organized, highly structured, and staged from Discord, means that even if an individual in the DG is innocent, he or she has witnessed these behaviors, first hand.


What can be done to halt the DG?
When PenUp first created options to block, this was a powerful tool: until the DG learned to operate via fake accounts and phony profiles. Reporting a real DG member's abuse can, and often, does result in retaliation through these dummy accounts..
Thus, reporting has failed to serve and protect innocent PenUp users. To the contrary, reporting unfaithfully or erroneously, whether intentionally or not, has weaponized the process of reporting and made it a vital tactic against ordinary PenUp users in the toolbox of the DG members, as we have seen, lately.


Therefore, adding modes and methods to create an authority figure from the PenUp Team is no longer suitable as a methodology. It has made any, and all forms of defense against the DG easily reversible by them, and, via deleting their own provocative comments, certain DG members have used reporting of comments and posts to the further disparity between innocent PenUp users, and any single thing that they can do to defend themselves.


Is there a solution?
In the current regime analysis, there is, sadly, no solution to the DG. The current system must change.


The solution can only be achieved by the PenUp Team accepting the necessity to drastically alter the current system, and to possess a general willingness to confront these, and other problems effectively. By doing so, The PenUp Team will then become proactive about these, as well as the other problems on PenUp.


The solution is going to need to both add edit history features, anonymous user mods selected by an application process, and the creation of a live "reporting room" within the PenUp app, in which each report is assigned a case number identifying it, as well as the mod to which it is assigned for inquiry. Mods should have access to a menu that permits edit histories to be included in the disposition of any given report.


VPNs should be banned for people who post art or comments.


Results: The DG group is the worst thing about PenUp. If PenUp users can be defended from it effectively, chances are, that the structure of the regime will need no further development. This removes the huge morass of PenUp Team deferments, as well as places direct consequences for such acts as trolling, bullying, sexual harassment/predation, and theft into the hands of those who experience these things daily.


This puts mods in the place of the current system of reporting, which is slow, ineffective, and prone to mistakes created by how the DG uses the system to its advantage.


Overhead Cost: Voluntary mods, screened and selected by application, will cost nothing.


Disciplinary Actions: The PenUp Team must prioritize offenses along the scale from sexual predation being first, and bullying second, and art theft third.


30 Day bans should be granted for each of the following:
For each ban, an appeals process should be successful once, and once, only.


After that, the offender needs to do their time.


Conclusion:
PenUp used to be a great app. And, for every effort made by the PenUp Team to empower the innocent, the DG has found a means to nullify that effort by incorporating it into their bullying tactics.
PenUp can still be great, again. But, the PenUp Team, as well as the Samsung Corp, must conclude that it is simply responsible for them to protect their users. Only then will they be willing to bite the bullet, and dedicate six months, and the necessary funding, to the implementation of functional regime changes that actually work. That way, they honor their duty to protect their ordinary users from such sharks in the PenUp waters as the Discord Group.