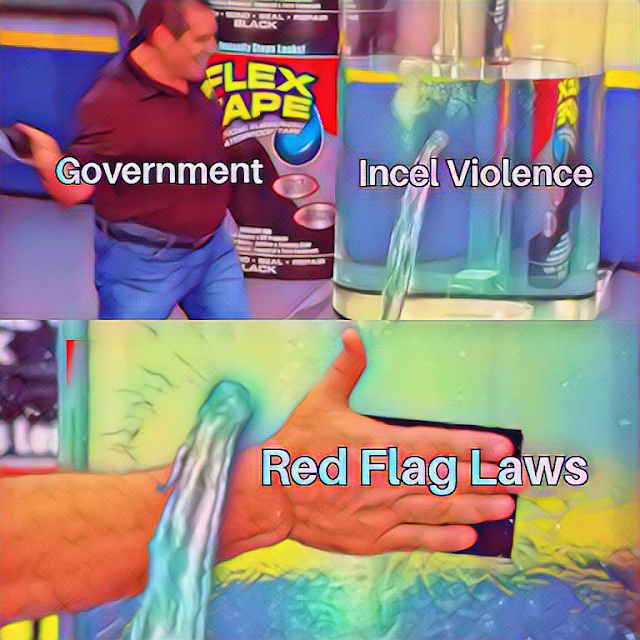 Among the Internet terms that have become a part of our everyday lexicon, Incel, Incel Rebellion, and Incel Identification have not gained traction. Unless you hang out on 4Chan...

By the time of the April 23, 2018 Toronto Van Attack, incel was already a "thing" on 4Chan. The thing is, whether it is via logical fallacy, or the fact that 4Chan is right, the posters have been correct 9/10 times as far as identifying the profile of the given made for media mass killer(s).

Incels, and Incel Violence may be the single greatest indictment of the modern acceptances of homosexuality, the LGBT community, and the abandonment of traditional moral values, in general. This is due to the way that the incel has been completely marginalized by these engineering efforts on the part the left wing.

The absolute absurdity of maintaining a governmentally reinforced paradigm enforcing arguments that claim that there are greater than two genders is laid bare, completely; in the effect it has had on the Incel.

Being Celibate
Celibacy used to be a clever way of busting on someone who never got laid. But, in the era of touchy feely bullshit PC internet culture, celibacy is just another gender identity/sexual preference, since blending the two distinct categories has created a monster of left wing promoted garbage. 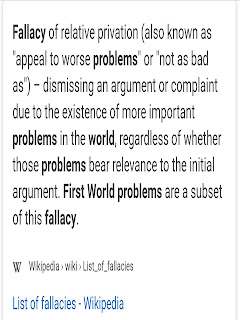 But the involuntary celibate is a different creature. He is a product of the age of the internet wherein slut shaming, or the process of bullying a chick who is amoral, has produced a generation of frigid females that are lured into the convenience of being gay....unless she can hook up with the internet arch opposite of the Incel, the Chad. 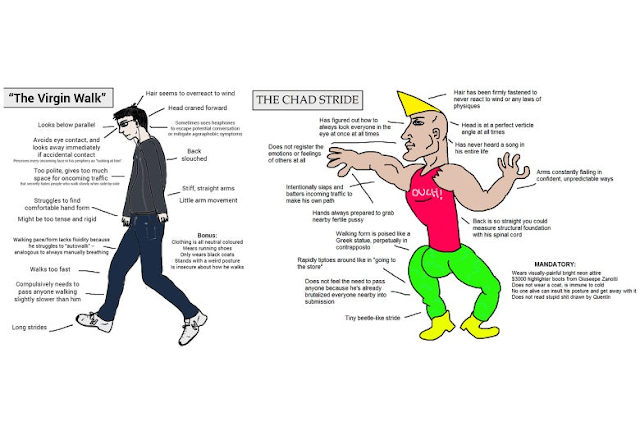 The Chad is often depicted as uber-virile, and dismissive of gender equality issues. Deferring to the gender equality issues to retain his status as "nobody's dad", Chad uses the gender argument to the greatest measure of his personal convenience. But, it is only to increase his sexual activity while simultaneously, preventing his ever becoming a dad.

The Chad Incel struggle is political, social, cultural, and economic, as well. But, according to the philosophy, the area receiving the most damage was created by the way that the struggle between Chads and incels carries out in everyday life. It is here that slut shaming has affected GenZ females, who inherit the results of previous generations of females, in their unabashed homosexuality, as well as over processed heterosexuality. This created the frigid Chad-only female.

And, since Chad is not making babies, this process is a direct attack at the white race, according to the theory.

Like it, or not, the Incel Rebellion has been correct as to the personality profile of each mass shooter in the last decade, with rare exception. It is for this reason that I find myself fascinated by the profile.


Elliot Rodger, aka, the Isla Vista Shooter, is a pretty typical case study of incel violence. In his vlogs, preceding his mass shootings, Rodger blamed the frigidity of the Chad-only Gen Z chicks for his personal failures, as both a man, a son, and as a student. Here, in Scare Theater's Elliot Rodger Leaked Content II, one can see for one's self the typical incel rebellion mass shooter in his own words.

Note the envy, note the hate for females that comes through clearly, in a rant otherwise disjointed, and disturbing. 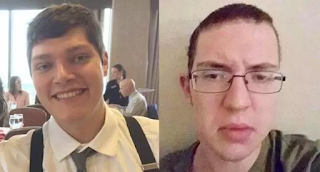 And, the mass shooters of 2019, thus far, match the incel profile, as do the Marjorie Stoneman shooter, and many, many others. One of the latest rash of attacks took place in Canada. After shooting an otherwise normal couple, the two incels committed suicide near a river, rather than being caught by authorities.


Eric Harris and Dylan Klebold, from the Columbine Shootings, are normally idolized by an Incel Shooter as "The Original Incel Rebels". But, this is not always true in each shooter. Here is a list of Incel Shootings. (Skip to Incel Violence)

Each day, on 4Chan, there is a post asking colorful questions, like, "What do we do about the Incel Question?" I always answer, "Whorehouses", or, "the ending of slut shaming simultaneous to the removal of the eweaponized ethot on Instagram." and these are measures that are possibly too late. And, yes: if you have no delineated relationship between being incel, and being this selfish: then you are a normie, Chad, or worse, and thus: fair game in the incel world. If you are female, then you, too, are targeted within this paradigm.

The Incel Question is going to need to be faced in a much more proactive fashion than simply using red flag laws, expanding them, and relying on them to respond to the Incel Question: because the fact is that the incel is using his parents to obtain access to money, weapons, and other necessary materials to carry out his acts. Red Flag Laws will not harm the Incel Shooter. It will literally only prevent normies from owning any sort of self defense.


The recent Mosque Shooting in Oslo is a good example of the way Mossad is using the Incel Question to it's distinct advantage. In this event, the mentioning of the El Paso shooter indicates an effort to connect the New Zealand and Norway shooters to the Incel Rebellion. In reality, the NZ Shooter was definitely connected to training with IDF and Mossad, and he is obviously non Incel. The Norway Shooter expressed admiration for both the El Paso Shooter, and the Chad New Zealand Israeli operative. For this reason, the Incel Rebellion would not accept these two shooters' actions as a part of their movement, leaving the conspicuous vacuum that at least something suspicious is afoot. It is my sincere advice that one not overlook those conspicuous details, and for that reason, one not dismiss immediately the prospect that Mossad is using the Incel Question to its own ends. Here is a link.


Why He Shoots People

The abiding last straw is the fact that the incel feels he is going to be the terminus of the white race, because he isn't getting laid. This is often seen in their manifestos, or their vlogs, and may not be worded in identical terms as this, but is, nonetheless, how the incel decides that mass shootings will somehow impact society in such a way as to somehow alter the conditions that created the Incel Rebellion, in the first place.

The Incel Question carries on. On /pol/, yesterday, a post read, "ITS HAPPENING! AN EVENT WILL TAKE PLACE AT THE GOLDEN GATE BRIDGE!" Less than three hours later, sporadic reports of gunfire are now taking place. This has a sinister implication, and if you don't get it, allow me to clarify: if the reports of gunfire are real, then an anonymous poster on /pol/ announced this shooting prior to carrying it out, yesterday. As of this moment, there are no reports of casualties.

Conclusion
In short, I didn't necessarily believe that the Incel is a real thing, however, the increasing accuracy in this description of mass shooters is something that must be given some attention, and long before the leftists turn mass shootings into more Second Amendment violating "laws". I now realize that, whether or not I believe it, they do. And, due to that, I must pay attention to this social standing, as it is experienced by it's members.

It is more accurate to answer the Incel Question, than it would be to correlate the acts of incels to the laws regarding firearms. At least, it is so in the United States.


Epilogue
Why Incel Identity was something I disputed, at first, is that the laws of attraction between males and females have not really changed. Most of the modern views of relationships occur online, and exist exclusively as atypical, comparatively, to historic views of what exactly, that it is that constitutes a relationship. Some of these people never actually meet in real life! They are together only online!

What I mean is that the net has provided the Incel with everything he needs, but a life. And, it is this missing piece that the Incel doesn't understand is not possible to be obtained by a net search. It could be said that he spends way too much time online. But, it is in a time in our culture where we all do.

Most of us were here before the net got big. We had to learn relationships from the ground up, circa the Fifth Grade.

We learned in real life.

Incels don't have that experience, and the consequences are hard to explain to those whose lives are online, in their entirety.

Security is the whole of the law of attraction between males and females.
Even in the Digital Age, security remains the in real life chief attraction law. And, this security is not as plain as it seems, at first.

The reason the girl crushes on the Football Team Captain is that he offers her security. Not physical security, but emotional security. The concept of belonging in a world (in high school) that is often hard to understand, dating the popular guy isn't as much about the female's status, as it is about security.

It seems to me that this basic law seems unobtainable to the Incel.

Financial security is another type of security. Know why the girl dates the guy with the awesome car? Because it translates to security. And the most basic functional part of the Incel Identification is an elemental insecurity, and true, some girls find that undatable, some girls lock in on it. I'm not sure which is worse.

Lastly, what most incels don't understand is that having a woman is punishment from a higher God. The Chad actually seeks to not become attached, due to this fact. The difference between Chad and Incel isn't as tangible as it being exclusively physical. It is really about experience, and the awareness that woman has been the ambivalence-inspiring curse against mankind, since Eve conned Adam.

I don't mean to offend anyone, but I do want to make it clear that a girlfriend is not a solution to problems. It is, in fact, the exact opposite of that. I guess the same could be said of having a boyfriend. While it is only natural to have the desire to pair up, the Incel may be permitting biological drives to order the murders of people whom he envies. In essence: because the internet cannot supply relief for an incel's biological needs, he deduces this as a permanent state of his alienation, and seeks a permanent, albeit, tragic, solution.

The Incel Identity is a product of carrying the online world into the real one, and not being told that this is where the wrong turn was taken. Real human needs cannot be supplied by a linear logic, but problems with the opposite sex must be handled in a case by case manner. We cannot Google the answer to our individual loneliness...

Girls have not changed, even though the rigid definition of the role of femininity, as it pertains to the clarification of the Incel paradigm, tends to demonstrate a belief by Incels that there was a time when girls were different.
The fact is, women have always been attracted to security and this has not changed.
at August 11, 2019