Marginalization is a process of alienation in which an individual's beliefs, or a group of individuals' beliefs are associated, and ultimately, both the belief, and the believer, are then categorized as being unimportant. 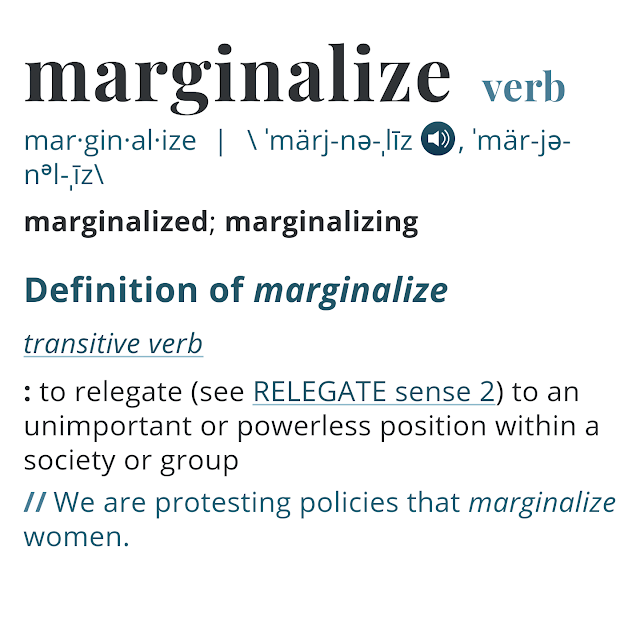 When one group feels it necessary to defend a morally indefensible argument, one tactic that may be employed is marginalization. In the traditional sense, marginalization is one of the first lines of organized defense against concepts that may oppose, or contradict elements deemed vital to the existing paradigm.


In order to assess who it is we marginalize, we must first classify the person(s) in some way. Rhetoric is normally engaged in this effort. Rhetoric is the use of speech to achieve effect.

Identity, Who Do We Love/Hate?

In most categorizations, we are introduced to the party being marginalized in the first statement. In the next statement, some sort of association fallacy will be introduced, and the stage is set for defining this category of person(s) as being one with whom negativity is now associated.

But, when that statement is not backed up by facts, evidence, and indisputable attributions, then this categorization process is, at that point, suspended. This is because proven statistical information which is necessary to marginalize a person(s) cannot do so if the facts are supportive of their beliefs, especially if it is this belief, or thesis which has inspired the act of marginalization. For this reason, it should be highly prioritized to use other means than facts, including censorship, banning the subjects from having a voice, and in this way marginalize them.

Therefore: when a group is being marginalized by another group whose unifying principle(s) has been discredited, then that marginalization process must require the application of force. That force may be governmental, police, or some other larger group to whom the discredited group must now turn, in order to replace legitimacy with authority. 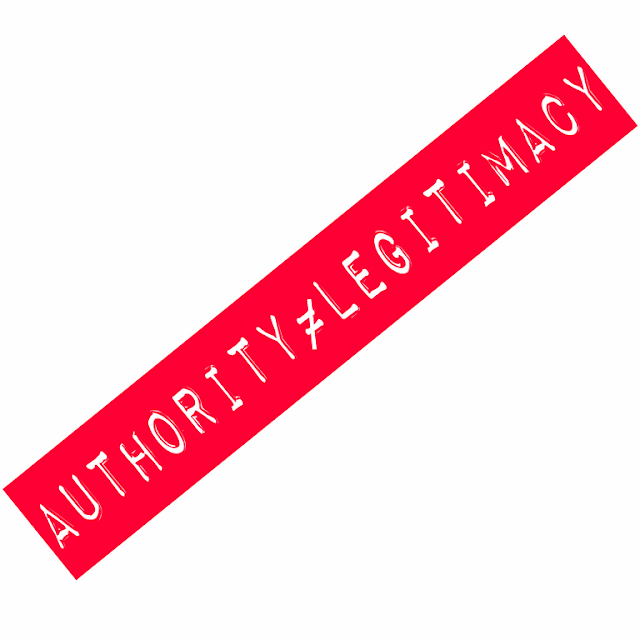 Therefore: authority equals legitimacy.
In fact, authority is only equal to power. And only rarely on this world is power in the hands of benevolence.

Associating a set of beliefs with branding automatically favors the party that is promoting that brand. It is an intellectual monopoly, of sorts, and in categorizing opponents, if they oppose a brand identity, categorizing that opposition is vital to perfect marginalization.

This is the goal of categorization, however: to convince a third party that the association fallacy about the person(s) being marginalized, made in the identity-portion of the initial statement, bears an equivalency with the person(s) being illegitimate in their beliefs. Then, to gain the trust of the third party, and if possible, their mutual participation in the act of marginalizing the person(s) can now commence.

The discrediting process is the most crucial portion of any successful act of marginalization. This is due to the fact that one may find it difficult to suppress, or to inspire the repression, of credible persons.

So, when accusing party has identified what it is they dislike about the unifying observations of the accused, it is nominal for the accused to mount some sort of defense.

defense: (n) 1. When someone must be victimized by authority because they will not accept the views of a smaller group, in spite of the fact that those views have been discredited. 2. When someone doesn't deserve their heritage's legal guarantees.

The most obvious problem with defense is that some people are going to disagree with the accusing party, and then have the unmitigated gall to repeat their evidence, after it having been explained to them that the accusing party can rely on facts which favor their argument, regardless of the accused party's information which contradicts those facts. Which reminds me: sometimes defense also means ignoring new information, or information which has been proven to have been long-suppressed by a foreign or domestic government.

But, at all times, the accuser should have to be listened to. This is effective marginalization! It isn't the facts we marginalize, but the facts and the group that persists in publishing the facts. After all, if they would just accept our facts, then we wouldn't need to marginalize them, and everyone would get along....


Always try to use emotionality against the accused.

People get mad when we try to marginalize them. When they get mad, they issue "threat displays", which is a set of behaviors that are to demonstrate clearly the dominance of one or more to any would be enemies. As soon as you raise your voice, wait till the accused raises their voice(s), in kind, then say, "Use your inside voice."

If they do it to you, you say, "Hah! This person is having to resort to authority fallacies to beat me!

All of these are ways to discredit someone. Especially when they are right.

After categorizing, then discrediting the accused, victory is practically yours! And it really means that all the lies we told, and all the information we ignored, was worth it. It is the privilege of victory to suppress the facts. (Britain, Lies For National Security, WW2, Blair knew).

And the greater the lie, as well as that lie's proximity to others who practice it, too, the more emphatically the truth might need to marginalized, along with those whom persist in naggingly bringing all of that nonsense back up, again. For instance, to hide a huge lie, a world government with access to Hollywood might choose to reinforce the lie by using music, or film in a sort of involuntary power point presentation.

In turn the government might allow a Pedophilia Ring, consisting of high level political figures, as well as high level BBC personalities and executives, to carry on in plain sight. And, one could equate the security of that ring with the truth about the Holocaust! One hand would protect the other! And Semitic people are obsessed with sex, sodomy, and perversion.

But, were the truth suspected about a congruency of decadence existing in an American Pedophilia Ring, and that truth come out, the Holocaust would still work as a means of marginalization. The Holocaust is a vital lie which we have created to accomplish much. It is a perfect marginalization of the Holocaust Deniers, and their habits, to bring up how the Holocaust were real, but these corrupt people are in no way connected to Judaism. 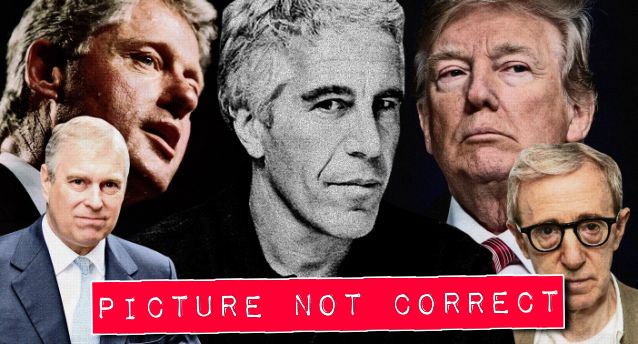 And this would marginalize those pesky deniers by being able to categorize them more easily, because of the high likelihood that the film and music industries would make any objection to the Holocaust ludicrous. Remember: in place of facts, successful marginalization must alienate opposition through acts of force. And brainwashing is exactly that!

The marginalized party must now, go away. When we have limited their opposition to the periphery, and made that periphery inescapable, we may now celebrate. We might go to synagogue, or make up names of relatives we can pretend were murdered by a nation state, or we may choose to murder Goy. As long as it isn't on Shabbat, Satan won't care...