Timeline of the Paradigm Shift in the Political Spectrum 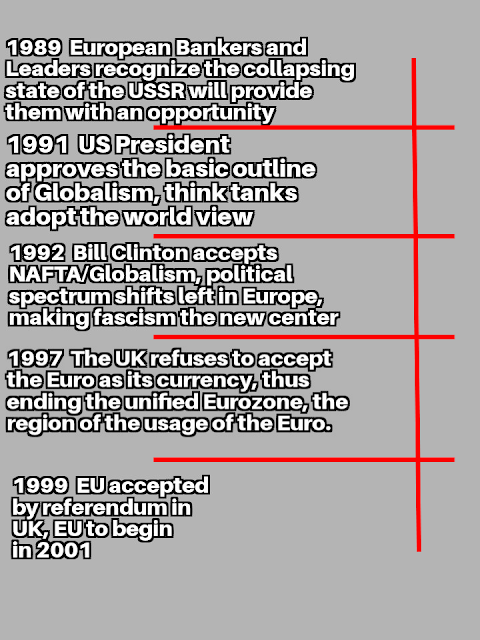 Polarity in world relations in it's simplest definition, refers to centers of power as "poles". UniPolarity, BiPolarity, or MultiPolarity refers to the number of centers of power, with power, itself, becoming less and less military as the poles increase in number. The creators of this analysis system agreed that two can be the least number of poles, as in the US/USSR, and that UniPolarity is political science fiction. After the fall of the Bipolar World, the MultiPolar World, based on regional trade blocs, was to arise.....until the process was interrupted by the architects of the EU.

By the time that the Fall of the USSR was deemed to be real, and not simply a ploy to get the west to give the USSR free money (a comment that helped to seal the single term of George Bush), the West, led by George Bush, was beginning to repeat the Masonic value phrase, "New World Order."

The trouble with the concept is that it was nothing new. Whereas, truly gifted scholars had predicted the rise of a MultiPolar World, until the rise of the Eurasiatic Alliance in 2014, the predictions of the rise of MultiPolarity were used by the architects of modern geopolitical relations, to prevent this from ever happening.

The entire effort was centered mainly in the architects of the European Union....

The European Union was supposed to be a prime example of everything MultiPolar....it, in fact is nothing of the sort. With an eye on providing the coalescing of National Banks across national lines; banks which were already geared towards the promotion of Rothschild Inc, and towards the de-emphasis of the business of each nation in which each of these Central Banks was located, a combination of Legislative acts, like  The Banking Rule of 1973 in France, (banning interest generated loans to the French Government, but not to the Rothschild's syndicate) as well as a corporate awareness within Rothschild Inc, became the real headwaters of the MultiPolarity illusion that is EU.

It was not to promote real and functional MultiPolarity, instead, it viewed the Nato Alliance as a be-all-end-all resource, one that would do their bidding as long as the Americans were on board. Thus, the rise of the UniPolar World, which does not actually exist, was promoted by bankers, whose capital often doesn't exist, either.

So, this abstract view of reality, in it's fleeting cases of antithesis which are often ignored, or suppressed, was simply not offensive to the architects of EU, whom now turned (around 1990) towards Washington with a proposition, one complete with flatteries of institutions and individuals, alike. Flatteries, which were based upon carefully compiled dossiers of each potential target whose personality or profile they felt would be an asset to the ends of a single governed European continent.

Around this time we also see Bush referring to NAFTA, a plan which no Republican alive would support, but as recipient to their charms, Bush had received the gifts of untraceable wealth, and small boys to his pleasure, and this he took to be a designation of a Divine and perfect inevitability, and sound resolve, as well. Thus, he pushed NAFTA upon a division within his party.

And two different presidents, since then, have ran for the office promising to end NAFTA, but both of them fell to these Zionist bankers' gifts. And in the end, this betrayed the very people that put them into office, which made opacity thick upon the pillar of democracy that the US once was.

Meanwhile, the MultiPolar World, as foreseen by the greatest minds of the age, was indeed, being born: but, it was not being born in America or Europe.

It was being born to fulfill a need to confront the evils of the architects of EU, whom, by flatteries, obtained the confidence of both parties in American governance by AIPAC, the evil Zionist lobbying firm disguised as anything but, thus the MultiPolar World vanished into a sea of trickery, hubris, and the hard realities of fractional reserve banking, and has emerged to confront those evils with the blessings of almost the entire geopolitical academic host of the United States. From each institution, each scholar was shown the false MultiPolarity of European Union, which defers to UniPolarity, and the US as it's technical head, or, the gathering host of ten (so far) nations of the Eurasiatic Alliance, which is real MultiPolarity: and each has been prevailed upon for their honest opinion.

To sum it up, the majority of us feel the great Waltz's quote, "Two can be the least number of poles in a political system" sums it all up. And, speeding up the consolidation of the MultiPolarity present within the Eurasiatic Alliance, is the fact a multiplicity of regional economies, militaries, scientific bases, and cultural presences have a template that follow in the temporary BiPolarity which confronting the US now offers to them.


The recent Indio/Pakistani conflict is a perfect epitome of the emergence of a new new world order: ancient animosities grew to a head in Kashmir over a four day period of February, 2019, only to end by means of the regional identity that both of them play within the MultiPolarity of the Eurasiatic Alliance.

Their wrath, no matter how determined it was against the other, is not greater than the threat of the US expanding into one, or the other's economy, as in Afghanistan: to the extent that even their military is no longer acting by the orders of their respective capitals of New Delhi, or Islamabad.

It would appear, also, that behind the scenes, the other member states were able to prove to them that their conflict was being fed by Zionists protected by the US.

So, this new new world order will remove the paradigm arrogance that raped Geopolitical thinking in the late 80's and early 90's, and I will try to lay some of the facts out, as they are.


The Political Spectrum shifted so far to the left, that the center is the old right wing.

But, their power to diminish the abuse of French Nationals by the European Gendarmerie is non existent. That's because great pains were undertaken to permit the force to be activated by the National Authority, the President of France, the incompetent Emanuel Macron: himself a banker and former Rothschild employee. So, in the guise of being a centrist authority, a fascist group is loosened upon the people of France, that is, a right winged, unaccountable "police" force is beating men, women, and children in France. And yet, the recent speech of the French President, in regards to the current crisis, are riddled with him speaking in former leftist jargons.

This isn't fooling anyone.

But, it was a consequence of the political shift that accommodated the rise of a European Union.

Another example is the German government, itself.

Once upon a time (and technically, remains true) a Chancellor whom could not assemble a functional coalition was operating in violation of the law. Tax codes, state official payrolls, etc, stood to be unapproved if this were to happen.

However, in a series of unprecedented moves by the Merkel Regime, a coalition, lacking a clear majority of seats, has been operating in Berlin much to the chagrin of several departing and resigning officials, as Merkel tended to defer to the EU system, the US military, for her personal desire to remain in power in Berlin. Technically, she isn't actually leading the nation, but, as most of the member-states are, she leads a government in-violation of any one of the EMU (European Money Union) pacts, and especially the GASP (Growth and Stability Pact). Therefore, in her unending deference to the EU as being the "Beneficiary of all European politics", she has short sold her nation.

But, in these examples, we see only members within the EU acting in fascist attitudes in regards for the majority.

What about other nations? How have the eu's architects altered them?


Instead of shifting to the right or left, American politics have unified, and merely made the voters think that there is any difference. This has expedited Globalist agendas, like false-flagged wars, such as 9-11 or the famed, "Assad Gas Attacks", and has also expedited the downfall of America's role in the Geopolitical family of nations.

In America, a Fiscally Conservative person, which is the very literal definition of the Republican Party, would never support the unending foreign investment of American money and blood such as proposed by both John Podesta under Obama, and John Bolton, under both ReBush and Trump.

These policies are identically fiscally liberal. The shift left in Geopolitics has fundamentally unified and solidified both major American political parties.

This was exemplified rather early on, in the EU timeline. When Bush pushed NAFTA, and Clinton at first, ran against it, that made Bill Clinton the last Democrat. As he embraced the flatteries of UniPolarity, and began to push these "NATO is the Army of the World" theories, he accomplished an identity with the Republican Party that should've been a natural fit for his own.

I bet EuroZionist Bankers laughed their asses off when Clinton bought the farm for America, by being the champion elected to halt irresponsible spending at home and abroad, and instead, made Zionist Banking change its name to UniPolarity, and observed, with their guidance, an unsound view of America's role Geopolitically.

However, the movement to the left has made a unified American government, which is now giving rise to extreme liberals, like Alexandra Ocasio-Cortez, whose blatant Socialist views have supplanted the newly unified, and old Democratic views of the voters in her district.

But, the problem is multifaceted, and in America, at least, cannot be solved by one, or even ten elections.

The problem lies with the voters, whom are busy with their lives, and don't necessarily have the time to observe all this coalition in American politics.

Also, internationally, this has changed the politics of nations that deal with the UniPolar Hegemonial presence of the Northwestern Hemisphere Union, which it is, it isn't a European Union.

And, the future for the nation looks bleak, as we must live out, again, the unlearned lessons of post war Germany's trending towards political extremes to solve problems.

Email ThisBlogThis!Share to TwitterShare to FacebookShare to Pinterest
Labels: Geopolitics