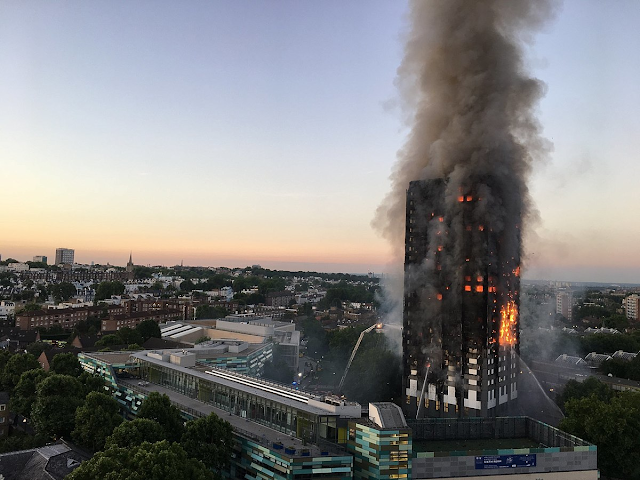 In the UK, on June 14, 2017, the government subsidized housing unit located in the Grenfell Tower, burst into flames, tragically killing 72 people trapped inside, including a stillborn child. After burning for twenty four hours, the remains of the building were gutted, and passed to the authorities as a crime scene.
Since that time, a number of concerns have been raised regarding the possibility that the destruction of the tower was no accident.

Whether it was negligence, or truly an act of diabolical murder, there is no way that any two people will agree. But, in reviewing the event, and perhaps some of the allegations, we might be able to understand why the rage, the hostility, and the unspeakable grief have led some to conclude that the entire event was planned....

The fire resulting in The Grenfell Tower Tragedy, which broke out during the early hours following midnight of the 14th of June, 2017,  has become a call-to-arms for different groups of people, such as the Grenfell Victims Association, the truther movement, Fair Housing Advocacy, and anybody who has listened to any one of these groups as they outlined their cases.

There are a lot of what some might refer to as coincidences, like a £10 million refurbishing project which is alleged to have been under the directive of the Celotex Company.

During the refurbishing project, Celotex is believed to have converted Grenfell into an incendiary bomb, by way of updating British building codes to permit their usage of a highly flammable cladding product manufactured by Celotex, as a result of that corporation's reach into UK Industrial Standards... 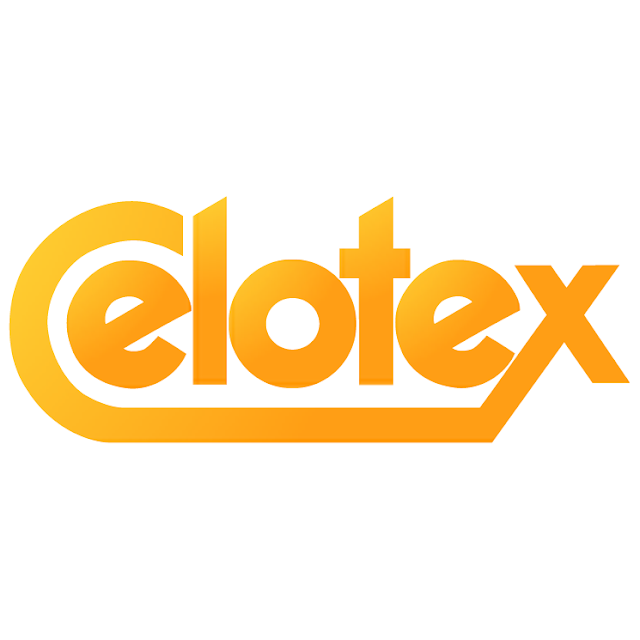 Another coincidence, according to the sources, might be the location of subsidized housing, preciously close to the million pound residential homes of high ranking government and banking officials in Britain.


Then there are some that view negligence as intention, and state plainly that the Grenfell Tower tragedy is the implementation of UN Agenda 21, or Agenda 21/30, and that the entire series of incomprehensible oversights resulting in seventy two people losing their lives is merely a testing procedure for the UN to begin removing poor people off of much needed real estate.

Whichever case we hear, including those theories that provide a ready answer for all of the questions: I cannot dispute any for anyone else, nor do I think that in endorsing one, or more, that the questions will be answered for me, still. Nor will they be answered as conclusively for me as they seem to be for a lot of people. But, we agree that something nefarious occured.

Tragedy is the inability to defer to guidance due to either the size and scope, or the unknown nature of an event; and part of the wake of a tragedy is the very naturally human process of trying to make sense out of the facts presented within the tragedy.

We are hard-wired to both search for meaning, and to understand the causes of a tragedy in such a way as that we are able to explain the tragedy, in an eternal quest for reasons why. This is biologically intrinsic in the human brain, based upon the tendency we have to see the pieces of a puzzle and gain the insight to assemble them into a cohesive picture. We are insightful creatures. We sometimes endow unrelated events with a pulse of association, though we cannot always easily identify the reasons that we feel certain elements in a set are linked together. We like to finish things, even if the necessary elements are not there to make that process possible.

Our brains will literally fill in the missing pieces, and, when one thinks about it, we do this to make a statement about the persistence of an ordered universe, that we so dread being in a state of not-knowing, that we create myths out of the void, in efforts to explain it, or we see faces in the clouds, because in our efforts to answer, we desire to know. And, in knowing, we are that much more certain that the universe is not so bad. 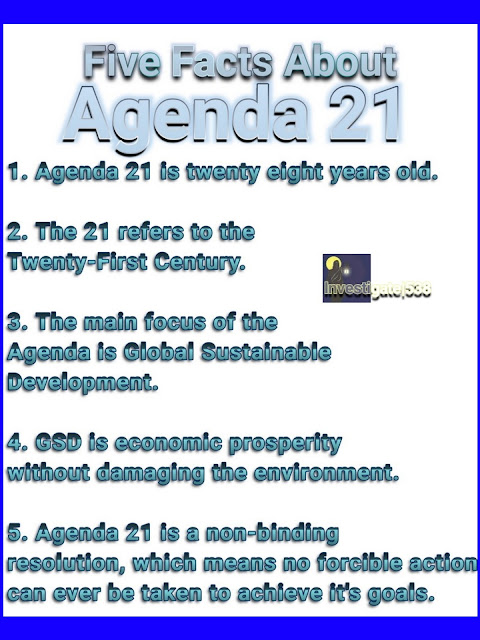 In regards to the UN Agenda 21/30, or just plain Agenda 21, there is no rationality to the fear surrounding it.
It is simply the UN promoting green agendas, and recognizing Global Warming, the pop culture phenomenon, and trying to convene carbon emissions conferences that will innovate the way we manufacture, sell, and transfer energy.

It isn't even seated before the Security Council, nor the Social and Economic Council of the UN. Agenda 21 is a non-binding resolution that is exploring advances in agriculture, arbory, and other botany-related fields in order to form international accords about methodologies to preserve the earth, protect natural environments, and environmental resources, and the implementation of renewable energy sources. 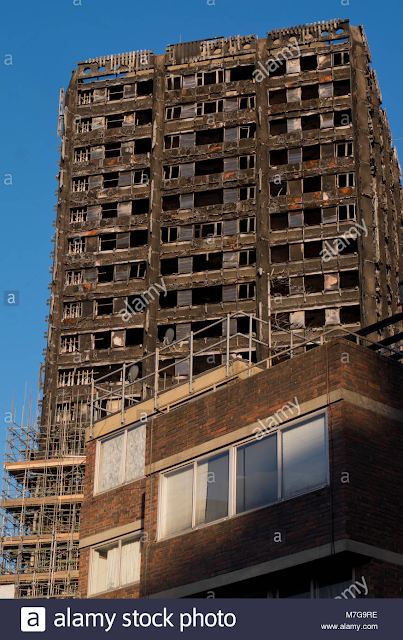 The Grenfell Tower Tragedy accomplished nothing towards even acquiring the land upon which the tragedy took place. The whole Agenda 21 angle being some monsterously evil plan, is, in my opinion, the actual conspiracy.

Certain landlords are legendarily greed-inspired, and corner-cutting at the expense of their tenants. In fact, as an archetype, the image of the cruel, pence-pinching landlord is pretty much universal as a conveyance of a cold heart, and unsympathetic character. If the Grenfell Tragedy has a shred of conspiracy, I don't think it is emanating from the UN. I think it is going to be a larger version of the Colorado Carbon Monoxide Tragedy.

In Colorado Springs, Colorado, in the early 1990's, a family of five died in their sleep due to a heating furnace part which the landlord, in an effort to save money, violated building codes, and installed exactly opposite of the way the manufacturer had intended for it to have been installed. He did it by himself, though he knew he neither had the expertise, nor the authority to do so.

He had been a firefighter, retired, and was trying to support his family by leasing properties. Upon the discovery of the victims' bodies, and that they had died of Carbon Monoxide inhalation, the investigation ultimately led back to the landlord. He was tried and convicted for five counts of manslaughter, though the intention was not to kill anybody: it was to save money.

It is my belief that the Grenfell Tower Tragedy will eventually be understood to have been caused by similar acts of greed and negligence. And, honestly, that is diabolical enough, without having to beat a drum of insistence in regards to UN Agenda 21, when, in fact, the entire paradigm suffers from fear mongering, as well as a lack of exposure to what Agenda 21 really is.

If one were truly seeking truth, why is there no community dedicated to exposing another community that routinely falsifies CGI laser weapons in pictures and film clips, laboriously misidentifies firefighting procedures, and enjoys a substantial number of YouTube views, and accompanying revenue stream? Frankly, there aren't tens of thousands of people that have been taken by the UN. But, there are pretty close to that number of YouTube videos that insist that there are whole populations vanishing as a result of Agenda 21.

But, the whole premise is that entire populations are being systematically taken. Would that not include a substantial amount of those whom dispute the Agenda 21 conspiracy, as well as those whom are privy to its sinister intent?

Yet, none of the vanished people's loved ones are coming forward.

Therefore: I cannot help but to become furious at these Agenda 21 people. They are literally capitalizing, cashing-in on the absolute misery of the survivors of the Grenfell Tower Tragedy, as well as the grief of the families, and the friends of the victims of this event, through revenue drawn from exploiting this event via social media platforms, and through fear mongering that approaches mockery of the grief of all-involved.

Like snake oil salesmen, they take advantage of the general public's complete detachment from the purpose, regime, and system of the United Nations, which is a demonstration of a higher form of disrespect. Yet, those who heed these people owe something to facts... They're presenting an opportunity to thieves, and the thieves are welcomed to their attentions.

But, the saddest thing is that in all these exhausted possibilities, which began as implausible allegations about the UN, the testament of the victims is made silent. Because we shouldn't be hearing, "It's the UN!"

And, instead, we should be hearing about greed, government corner and cost-cutting, and we should also be hearing some charges, so that the actual responsible parties are brought to justice for this tragedy. In the very least, that it never has to happen, again.

And I'm not necessarily referring to the victim settlements, but I think that whatever path Celotex took to straddle both the corporate world and the government sector, that path needs to be discovered, and sowed with proverbial salt; that this lesson permanently make its heart wrenching statement into the braids, where corporate accountants conceive the bottom line.

That is negligent of both Celotex and the British government. And they both manifested this cruelty over a truly vulnerable section of the population. And, that is unforgivable.

As I stated, I can conclude nothing for anybody else. And, coming into this article, doing the research, I was surprised by the fact that I had not heard of a Grenfell Tower Conspiracy, until I read about it on line, and watched a few YouTube videos.

I have my opinion. I hope you have one, in regards to the themes that are present in the Grenfell Tragedy, and I hope that it is not based in fear, nor unsubstantiatable allegations. I hope your opinion never leaves the reality of seventy two deaths that might've been avoidable if the Celotex Company had not been permitted to rewrite building and construction codes in such a way as to feature its own products.

Nevertheless, I urge you to keep yours, respectfully.