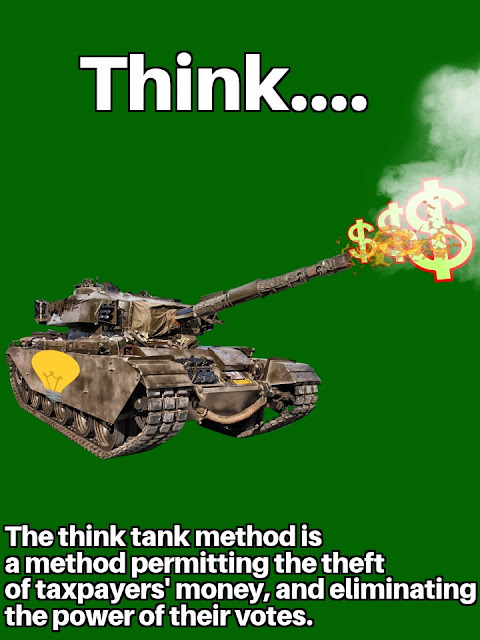 https://en.wikipedia.org/wiki/Think_tank
The actual budgeting of the nation, and thus, the actual running of the nation, is done in Washington, DC, through a concept of power known commonly as, think tanks. The majority of these organizations are situated along a quiet DC section near to the government centers, and the historic buildings, but far enough away to draw only little interest from the public. The area is commonly called, "Think Tank Row."

Still some are located on the campuses of esteemed educational institutions, like 38° North, the North Korea policy team, which enjoys an association with John Hopkins University.

But they mostly operate in the hazy netherworld that lies between public accountability, and official Government business, much like the Federal Reserve. 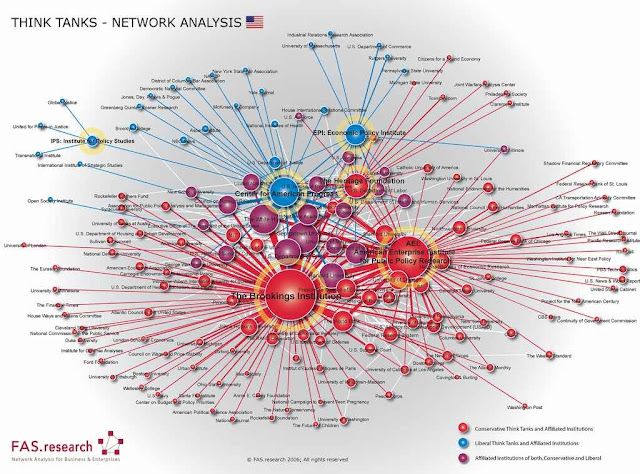 The first think tanks that come to mind are the Rand Corporation, and the Brookings Institute. However, there are literally dozens of these organizations, and they have larger foundations that absorb the general issues that create the manifest political divisions between conservative, and liberal, although they tackle a variety of non-partisan issues, as well. But think tanks are 90% of what is referred to as, "special interest lobbies."

The Rand Corp is a defense department-related private sector group founded by Air Force General HH Arnold after WW2, and is primarily dedicated to foreign policies that include war, as well as the research and development of defense-related issues.

Rand stands for Research and Development. The Rand Corp translates the ideas of foreign wars into legislation, and propaganda, to ensure voter approval; and consults on all levels of intelligence and defense for these wars.


It is through the Rand Corp that right wing agendas are often planned. They design the actual war, and strategy of any given war, consulting on every defense related issue.

The fact that the right wing and left wing use these think tanks in the same way speaks to how they remain allowed to operate.

The Brookings Institute, a left leaning organization, is where the issues like Roe V Wade, and the concept of hate crimes were, and continue to be studied. It was this institution, and not the Democratic Party HQ, that Nixon had initially ordered to be firebombed as a part of the Watergate coverup. His AG at the time, John Mitchell, had objected to this.

Nixon simply kicked the AG out of the loop. He then ordered the Watergate Democratic Party HQ to be the target of a break in. But that is just one testament of the effect that these organizations have in DC, that Nixon was willing to risk murder and arson charges, to, as he believed, eliminate the, "Brookings people" from succeeding in their plot to, "de-throne" him.

Most political scientists had agreed with the founder of presidential character assessment, David Barber. Barber, in 1969, had predicted that, "Nixon will be in trouble by his second term."

But Nixon's undoing came not from the Brookings Institute, but, instead, it came from a leaker, Daniel Ellesburg, and his publication of the Pentagon Papers, a set of memos, studies, and outlines that prove the power elite knew that the Vietnam Conflict was unwinnable, but kept escalating the intensity of the conflict, anyway. The fact that Ellesburg worked for the Rand Corp, and not the Brookings Institute, means that Nixon knew what street to look down to find his "enemy", he just had the incorrect address.

The Brookings Institute consults on issues considered progressive, which are considered by many to be a threat to the vitality of the nation; and pursues these agendas by acting as a parent company to affiliated organizations which share this agenda.

There are a variety of ways which the government does its dirty work through the think tank method:

Through his Open Society Foundation, George Soros acts as a US Diplomat staking foreign officials and warlords with cash which would place the ordinary citizen, as well as the US elected officials that initiate these methods, into jail. Cash is "donated" to the Open Society Foundation, from the Federal Reserve via tax exemption, which, then, funds failed coup attempts against Erdogan in Turkey, or the notorious White Helmets in Syria: whom forged gas attacks in convenient ways for NATO to both pretend to fight, but in reality, support ISIS. 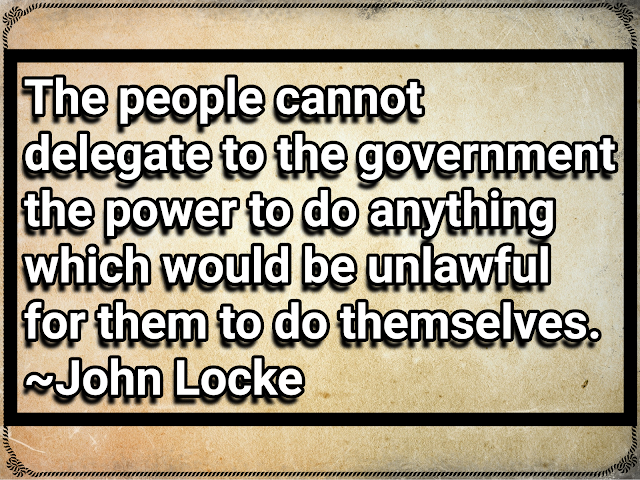 Other examples are the efforts to fix the Hungarian election of 2018 for the less anti EU opponent of Hungarian Prime Minister, Viktor Orban.

Think tanks receive one of two major categories of tax exemption (301-c, or 501c), which translates to, "the country is being run via unelected officials whom are paid as though they were!"

But there is no oversight for these foundations whatsoever. And, their role in governing the people who foot their bills is Unconstitutional, a sham, and in no way, fashion or form, should this be allowed to continue!

Take the Case for War in 2003: the entire thing was accomplished in AIPAC, the pro Israeli think tank, and the American Enterprise Institute: the people who pretty much carried out the sloppy and idiot ReBush "foreign policy."

And it is the meetings here, and the monetary issues, here, which do the actual running of the nation.

Our leaders are supposed to be accountable!
But the power that the voter has bestowed upon our elected officials is divested via any given think tank(s) according to religion/nationality, party, fiscal financial views, and mutual necessity.

If the United States wishes to end the types of wars ReBush started, and due to unlearned lessons, will be started in Iran: then the think tank method of governing the United States must not be tolerated as of now. 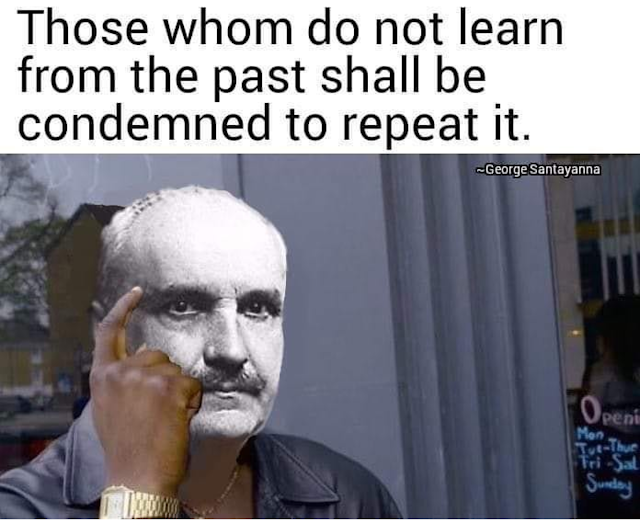