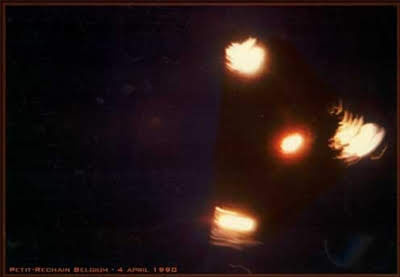 Above: though created by a French UFO investigator, as a kind of, "artist's sketch" of a criminal, this picture of the Belgian Wave craft is exactly what I saw. The witnesses to those events also acknowledge that, "These are not the creation of humans".

The question is not, "Do UFO'' Exist?" The question is, "Why do the US/UK Governments insist that they do not?" I think it has to do with a God who rejected Judaism 2,018 years ago, and a government that, for whatever reason, chooses to keep that secret hidden from their populations, whom they have very laboriously misled.....

In 1994 I met and started dating a girl named Brandy. In 1995, we moved in together, and very often, our friends would make it a point to drop by the house, and say, "hi!"

I was in my freshman year of college. I worked and attended school full time, and she went to college, and picked up work here and there.

Black triangles in Alabama are a common occurrence, nowadays. They were a European phenomenon, however, back in the early to mid nineties. I have literally observed Alabamians look right at one, and not notice that the aircraft upon which he or she was gazing is not a human product.

Some cannot take the questioning of the Bible, which, for reasons I cannot understand, they say that UFO's incur.

No questions : UFOs prove an army greater than that available to murderous Zionist serving fascists awaits.... should that distinction ever need to be made, and the final resolve need to be expressed.... But, the majority still cleave to the cover story that these aliens are, in reality, USAF pilots.

However, this is not a US Military black project. The effort to claim that these Silent Deltas are, in fact, a secret US Government project is sponsored by the government. After all: if nation states ever master this impunity for radar, and the mortal limitations placed on human pilots, then the US cannot protect us.....unless it's already the US's aircraft!

One evening in March, around 8:00 pm, my friend, a guitarist whom I'd worked with in the past, Matthew, dropped by to visit. Brandy (my gf) and I had been working on some acrylic paintings for her fine arts class, and the three of us sat at the table painting, and talking, when I had to step outside, and rest my eyes. It was about 9:30 at night....

I went out the door and noticed, almost immediately, that the noises accompanying a March night in Alabama were conspicuously absent....as if something had disturbed their normal choir...

I looked up at the beautiful rural Alabama night, and noted the position of Orion, and suddenly, off towards the North, I noticed an unusually bright star! It was unique, and I had never seen one like it, before.... It was growing!

Eventually, it took the shape of a man standing in the sky, with what seemed to be a staff in his hand, but there was no detail, just this shape, cast in a brilliant light.

I yelled to Brandy and Matthew, that they needed to come see this, but they didn't respond. That made me short with them, because I figured this man with the staff in his hand was going to be a once in a lifetime celestial event, and I wanted them both to witness it...so, I ran inside.

By the time we all three got outside, the man in the sky remained for just a single instant; then, vanished. In its place was first a sound, like an electric generator on a pole, that buzzing sound, than, suddenly, and at rooftop altitude, a huge black triangle appeared, and had a huge, bright, amber-colored light in its center, and on each point, was a red, blinking light, that sometimes turned blue-green, and and back to red.

The three of us stood there, speechless.

Then, as it passed over and was gone, we slowly, without speaking, just went back inside. Matthew left, soon after, and Brandy and I kept going over each detail of what, exactly I saw, then, what she saw. She saw the man longer than I thought she had...

I knew, from this moment, onward, that any doubts about the UFO question were government-sponsored! That triangle had to have reflected radar returns on the Nauvoo radar, on the Birmingham radars, and the Air National Guard radars. There is no way that it didn't. That means the govt knows that it was there, and knows where its flightpath took it.

That also means that the US Government, in particular, is lying about the UFO question.

We told my mother, a US Army Officer's wife for thirty years, whom, in line with her complete faith in the US Government, thought we were, "....seeing things...." to put it mildly.

She went as far to say that I was hallucinating, and the other two may've been merely placating me.....

Fast forward to January 5, 2000. Nighttime, in a cold night, back when I smoked, still. While visiting my mom, I had stepped out onto her porch to smoke, and boom! There it was! Another one!


Cars in the street in the front of my mom's house were looking up and pointing at it!
I ran, and told my mom, kind of rudely (looking back), "Tell me I'm hallucinating NOW!"

She came outside, and it took her breath away. They're too big to make no noise. Human aircraft don't exhibit those kinds of flight characteristics. Her husband, my dad, was a pilot in the army for thirty years, we'd seen every type of military airframe that there is, and she knew, right away, that this was neither human, nor the product of a hallucination.

I watched, as thirty years of lies, thirty years of brainwashing, all of it, melted away, and she stood there, knowing that UFOs are very real.... And, if they lied about that, what else has our government brainwashed us to believe, or to not believe!?!? 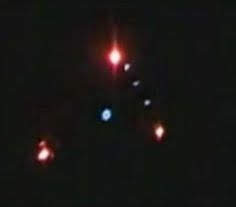