Across the world, right now, lines are being drawn, sides are being chosen, and the almost century old molds of alliance are being broken, as the powers of earth brace for the coming of war. The issues central to Iran, and the US exit of JCPOA are causing a new, and polarizing re-alignment of the definitions of "power", globally. 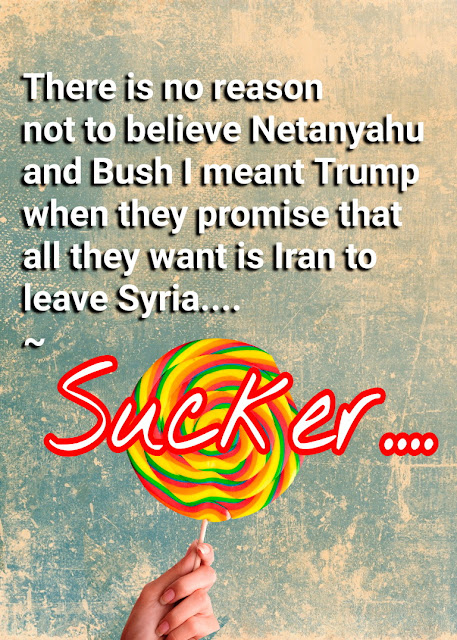 But this isn't all.
The perceived mutual enmity between eu, and the Russo-Sino Alliance over the Balkans, and Turkey, has eu in beginning phases of changing its former hard-lined attitudes.

These were attitudes it once shared with the US as among the first expressions of post-modern Globalism. Affirmation of MultiPolar World Globalism was only successful in regards to the Balkans. (Which is now, coming undone)

With that one seminal international experience sacrificed to the Gods of the Orange Toupee: the destiny once believed to be certain to Globalism, and to Democracy, is in immediate and dire need of redefinition.

Pax Americana is dead. That fact is driving the reassembly of loyalties and alliances all over the world.

Meanwhile, the clueless idiot savant running the US foreign policy has no idea how counter-intuitively he has balanced the vast majority of powers on earth, against his nation's military prowess... For he has stacked the deck, via a combination of Twitter, a lack of grace, and a mouth that never stops running, into a perfect storm of empire-crushing, and world wide resistance.

And, there's no turning back.

This morning, both Chinese President Xi, as well as the Saudi king remarked about how the war has started, already. With Trump threatening the Saudi king on Thursday evening, and Syria clearly lost (except in the Israel First US/UK Yellow Journals), the infuriated Saudi king now knows firsthand, the dangers of reliance upon an idiot... 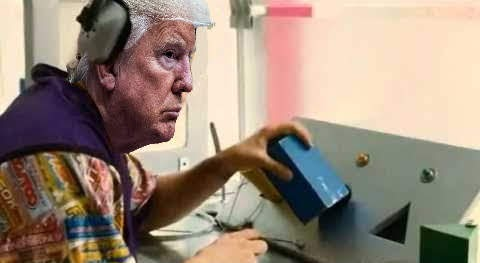 Odds are, his population's contempt for his family, personally, as well as their objection to the Ugly Four's efforts throughout the Arab World beginning in 2002, and concluding sixteen years later with nothing except tremendous losses for the Saudis at home, are all beginning to affect his outlook on another sixteen years, and the clearly turning tide lining up, now, to defeat the UK, US, and Israel. 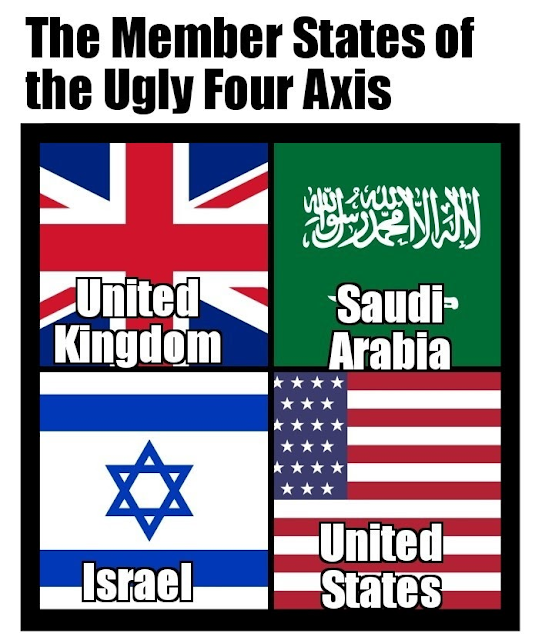 The Saudi king may be wealthy, but his military isn't capable of winning versus The Grand Alliance Against NATO.

He must take steps to ease out of hostilities in Yemen and Qatar, as well as take steps to de-escalate his nation's military commitments to these efforts, and thus cease aiding those militaries of his (former) alliance, US, UK, and Israel, to which he is yet allied....

Israel costs them money, but Iran would have made the UK money, with the oil contracts JCPOA guaranteed them: with Brexit approaching and the combination of a US president who is just stupid, odds are that Brexit will cause a paralleling of UK-EU interests and relations; as both are cash poor right about now.
(Below: What began the mess...)
http://www.theotherkevin.zone/2018/09/the-role-of-jcpoa-in-maintaining_5.html 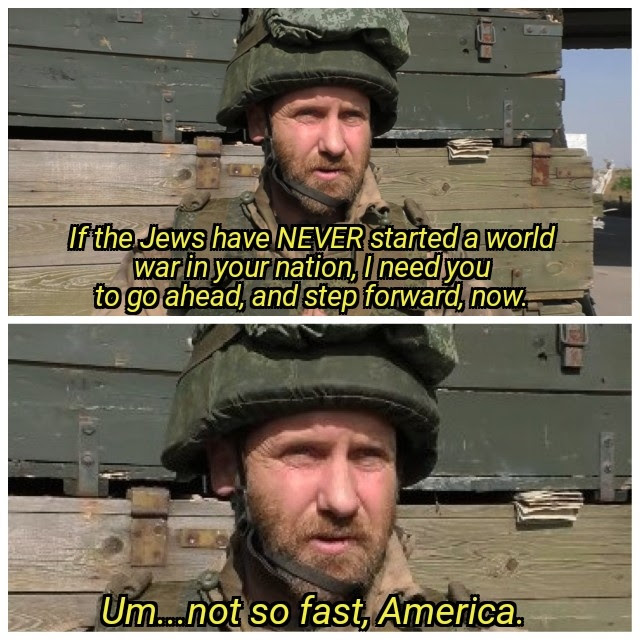 China continues to express authoritative power in the Indian Ocean, and China Sea. This has limited the US to the Sea of Japan.

Europe is preparing for war. The only way to avert it is to reconvene a new UN, omit the US, and enforce a military two state solution on Tel Aviv, and restore stolen property to all Muslims that the US veto helped to injure. 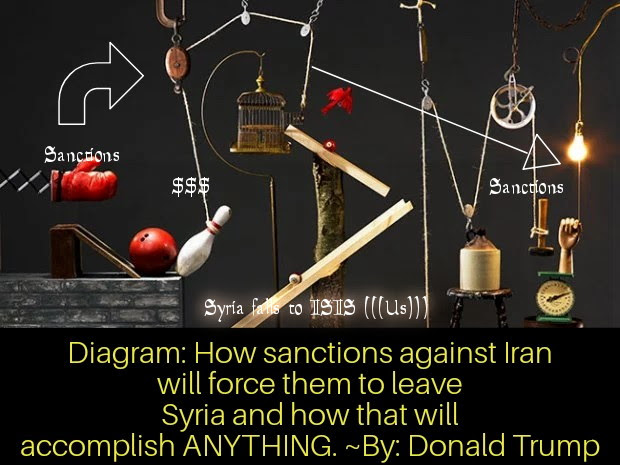 This means that eu must fall.
But it also means that the only way to avoid armed conflict is by ostracizing the US, and convening a new UN, and to correct the mistakes of the UN, and it's Trusteeship, which permitted this war to develop.


Quantum of Abuse by The United States, Against the Regime, and the Location of the UN

These are three statements that mandate a new world order:


*US, Russia, China, France, and the UK are the Five Permanent Nations of the UN Security Council. Ten other nations are temporary members, taking turns by an assigned rotation.

Below: the lies, from the September 11 Attacks, to Syria and now Iran, are chronic. Our Israeli corrupted officials seem totally united in their efforts. Here, in Bob Mueller's testimony to Congress, he refers to evidence that WMDs remained in Iraq after the 1991 Iraq War, and therefore his concerns were that these weapons would be deployed against the United States by Al Quaeda. Liar:

The US deceived the UN twice in recent years. Both times were to please to Pro-Israeli Lobby in internal US policy-mechanics.
With UN Binding Resolution 1441, the Secretary of State Colin Powell was fed falsified data establishing Iraq as having violated a succession of resolutions prohibiting weapons of mass destruction from being in Iraq.


[Below: WaPo Quotes CBS's Face the Nation episode in which Powell identifies Cheney and Libby as, "....having overseen the content of his Case for War speech...."
https://www.washingtonpost.com/blogs/fact-checker/post/colin-powell-versus-dick-cheney/2011/08/30/gIQAwYydqJ_blog.html]

This deception was created by the Vice President's office, according to a 2011 interview given to CBS news by Colin Powell. But, the trail doesn't end there. Rather, Cheney seems to have been a destination for falsified evidence in regards to Iraq.

Much of these lies were known both to be lies, as well as they were known to have been a falsification created by Mossad, which made them "nation-state" level intelligence from an "ally", as well as the pro Israeli Lobby within both the public and the private sector. 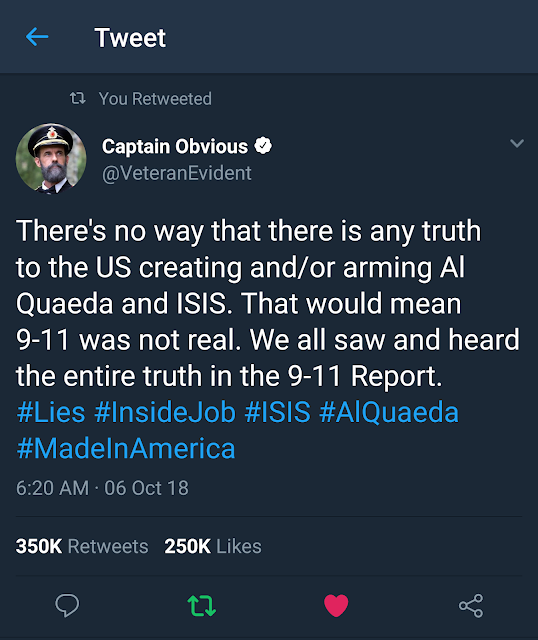 The Iraq War cost 4 million military members in Iraq their lives, to include children that picked up weapons to defend what was left of their family.... Their bodies were counted as "military casualties."

The rest of 7 million are vanished and presumed dead, with a slim chance some entered Europe as refugees bearing Turkish passports.

There were no weapons of mass destruction ever found in Iraq. 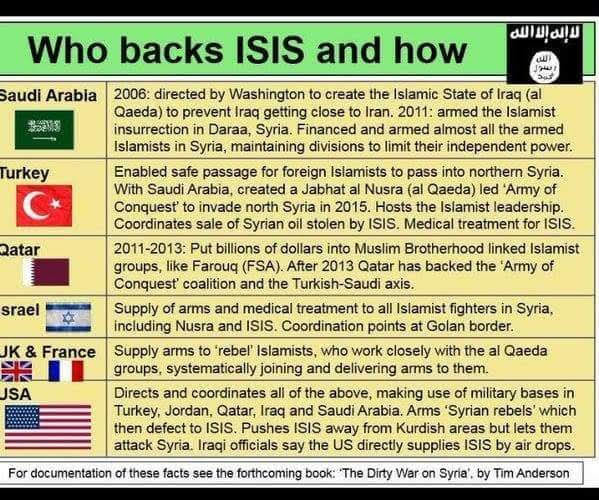 Obviously, Trump now realizes that CIA/MI6 and Mossad founded ISIS, and ISIS and Al Quaeda are his "great friends."

The US obtained 1441 to, "...find, combat, and remove Al Quaeda, Sadaam Hussein, and WMD's from Iraq...."
But, with Obama's UN Binding Resolution 2253, a thinly veiled effort to engage intrigue, and espionage, as well: it became all too clear that the US is funding Al Quaeda and ISIS!

Then, with the deceit of the United Nations in regards to the Levant, the US again lied to the UN, and not only sought a resolution to attach to known lie 1441, but to amend it with the addition of fighting ISIS...and UN Binding Resolution 2253 was born. #LiesThatKilledPaxAmericana! 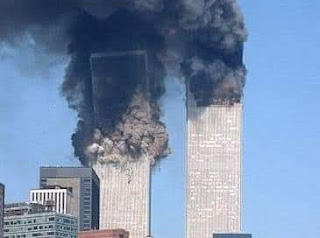 [Below: The relative quiet through which Obama obtained a unanimous vote for Binding Resolution 2253 stands in stark contrast to the other lies, told by the other administration, but, both lied. Israel and Obama having a stressed relationship seems also, to be more lies....
https://www.un.org/press/en/2015/sc12168.doc.htm]

Both efforts were Israeli-sponsored lies, as both Al Quaeda (the ones who committed the September 11 Attacks....right?) and ISIS were supposed to be the subjects of awesome US military might. Instead, the US, UK, Israel, and the Saudis created, armed, and used these Kurdish people in order to carry out a series of failed revolutions throughout the Arab World.

This proves that the September 11, Attacks were a false-flag operation, and that the American people are, in 2001: within decades of losing their empire

This is proof, also, that there is a God. 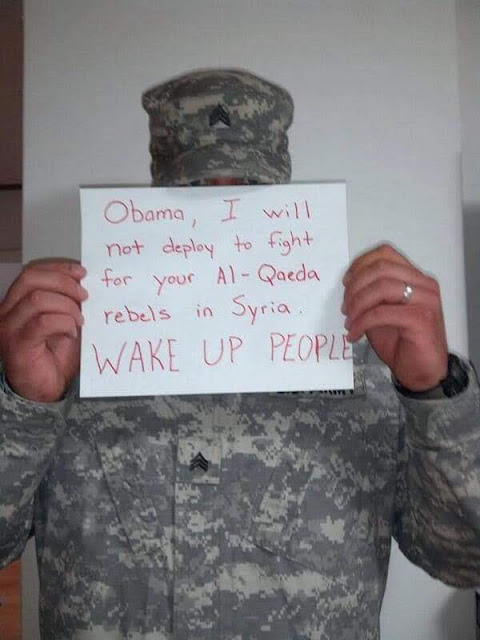 Veto of the Damned

The UN Charter does not include any provision for a Zionist State. It does, however, include a provision for a Zionist State and a Palestinian State.
Unfortunately, the Jewish corruption of Wall Street meant an open door into both major US parties, and thus a veto by the US Ambassador to the UN, which prevents any enforcement-efforts of the entirety of these Article 80 Provisions of the UN Charter.

These vetoes tend to permit, and to guarantee Israeli atrocities not only take place, but that they are not recorded, and are not prosecuted nor accounted for, and this is the primary function of the US's vetos (51 in almost as many votes).

No question remains that this stands as mandate from a new, Russo-Sino world order to sack Israel, and if Jews survive, to enforce Article 80 of the old UN Charter to the last section, and to the last letter. 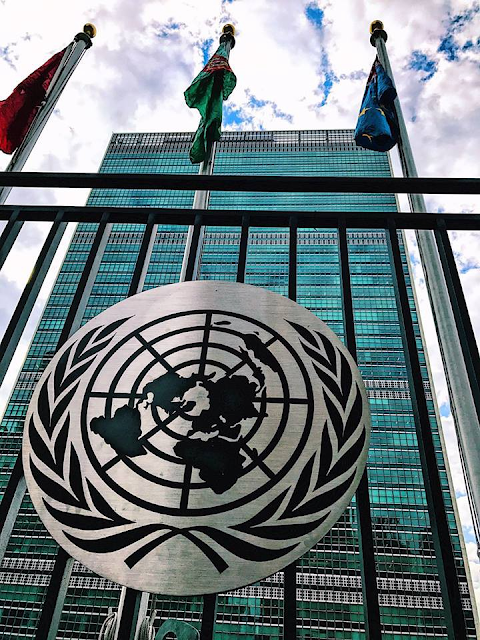 The United States has been able to, on multiple occasions, demonstrate a very limited intellect, and a generalized lack of knowledge of both History, and of functional solutions which History should guide.

The solutions, which were led by US efforts, suffered a transfer of that lack of depth, which guided the solutions it sponsored. As a result, this caused the problems not only to remain unsolved, but to inevitably, repeat.

And, in these problems repeating, we saw also a new, and increasingly greater skepticism for the function, as well as the purpose, of a UN.

What ReBush did in 2003 with the Iraq War still echoes....and the thunder isn't in sympathy with the US War on Terror. It is the knowledge that Pax Americana had been underpinned by the guidance of international organizations, like UNSCOM, which was tasked between 1992-2003 with certifying that Iraq had not violated the terms of the US cease fire.

That any given nation is now very aware that US power can, and often does attack and destroy nations that are in compliance with international law is the death of Pax Americana.... There is no reason left to not attack the US by the unseemly logic that the US itself has employed.

This knowledge is consolidating the Grand Alliance Against NATO today.

And, it was the abuse of American Custodial prominence over the United Nations, and international relations in general, that killed Pax Americana.

Pax Americana, which had emerged post World War 2 as a way of telling Europe that peace would be preserved....or else, fell to the same hubris and greed the world entrusted it to prevent. In betraying this, ReBush has ended the concept.


Most recently, the Balkan resolutions, and the answers to the Albanian question, have begun coming undone. This is a direct result of the acts of two different presidents, and a generalized American ignorance as to the subtleties of international diplomacy, history, and just plain common sense....

The UN/NATO Solution, as it pertains to Kosovo, and Serbia, is converging with the issues incurred by the half baked idea of a Macedonian State: and slowly the world is catching fire from one of many corners touched by the United State's anti solutions which were granted through the UN by merely being the custodian of the facility.

In these paradigms of failures, the US has accomplished a perfect criminal indictment of its trustability, and its true commitments.

It is for these reasons that a new UN must convene to deal the US out of power until the cruelty, and deception of Israel can be outlawed, here.

Below: Evidence that China (and Russia) are indeed expanding the concept of the birth of a new era of international relations, one that excludes the US.