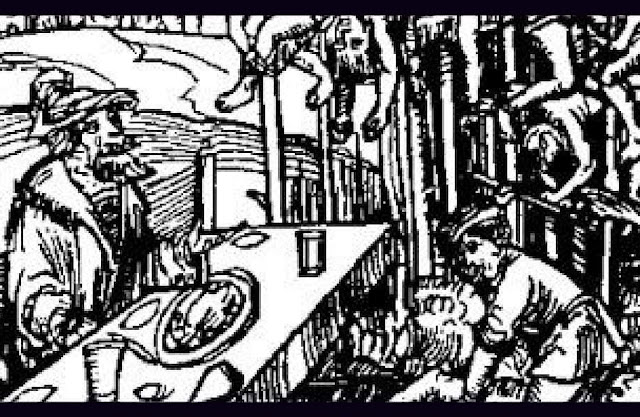 In 1054 AD, the group of Eastern Orthodox churches split with the Western (Roman) Catholic church. In spite of this papal effort by Francis to declare the Schism over, the Schisma had many causes which remain unsatisfied by the Vatican. This makes the Writ of Schisma still in-effect.

By the year 1431, factions within the Roman church were defining themselves, yet the Protestant Reformation was still a century-plus away....

Though four centuries between Schisma and the age of Vlad Drakul separated the two, the world was much slower, then. Communications were much slower, and xenophobic distrust between the Roman church, and the Greek churches expressed themselves in political avenues, as well as art, language, and culture.

This schism remains the mutually exclusive difference between Eastern and Western Europe, to this hour....


There is a lot of confusion about Vlad Drakul.... He was a Western (Roman) Catholic living among the Orthodox (Eastern Church) as the Schism of 1054 AD was playing out, and defining political, and ecclesiastical affairs of the era.

The Schism is a declaration of ideological differences, beginning with the Easterners' rejection of icons (the Iconoclasm), and finally resulting in the Writ of the Schisma: in which the corruption already at work in the West would finally divide the two Roman Catholics and Greek/Orthodox Catholics in 1054, about four centuries before Vlad's birth, in 1431.

The fact that he was Western Catholic meant that the people he ruled were suspicious of him, and were it not for his benefactor, the King of Moldavia, (St Stephen) he would not have been able to rule from the throne which he had inherited from his father.

> There is no truth that he drank blood soaked in bread. Most historians believe that this was a lie started by a political conspiracy pitting Vlad against the two forces of the Boyars of Romania, who are royals, as well as their regional center of power, and the authority that gave Vlad his crown, the Roman Catholic Duchy of Nurnburg.

> The reasons for the clash between Vlad and both other royals, as well as his own serfs, (poor classes) were simple: Vlad observed that the Boyars were entering into the despised Sultan of Ottoman-Turkey's palaces, and obtaining much desired Eastern goods on credit. Then, the Boyars returned to Wallachia, Vlad's County, and sold these goods for gold and silver.

Then, when the Boyars were full of wealth, they fled to the relative safety of Nurnburg or the Austria-Hungarian Empire. Nobody knew why the Sultan's armies would return and murder man, woman, and child in Romania, until Vlad put it all together.

> He banned sells of goods bought on credit. The Boyars complained to Nurnburg, and obtained a Writ of Edict permitting Vlad to be disobeyed.
>This resulted in his first trial, where Stephen, the King of Moldavia, defended Vlad, who had captured the Boyars, and had them delivered to the Sultan's palace. Since they were royals, Vlad's actions were unlawful. But, the Duchy of Nurnburg agreed to release Vlad: but only on the condition that he lay his right hand on the Bible and swear not to "fare harm against our brethren, the royals, on pain of damnation...."

> So, when this verdict went his way, he returned to Wallachia, and, at his OWN EXPENSE, had a proclamation nailed to, "...every rock, tree, wall, and home" in Wallachia: THE PUBLIC IS HEREBY FORBIDDEN TO PURCHASE ANY GOODS, WHATSOEVER, FROM THE BOYARS."

This, of course, infuriated both the Sultan, and the Boyars, who formed an unholy alliance to destroy Vlad.
But, Vlad was prepared: he invited the chiefs of the villages to a "last meal"(unbeknownst to them). These were villagers, whom his trusted spies were able to prove, had violated the new proclamation. And, after feeding them, Vlad ordered them put them to death.

Vlad used the method of impaling because that was the method preferred by the Sultan to kill the peasants that the he ordered the Ottoman armies to kill as punishment, whenever he would enter Christian lands seeking the money that the Boyars owed his merchants. This sent a message to the Sultan that Vlad, and not he, was the Judge of Wallachia. The only "evil" associated with this method was the credit, theft, and betrayal of Wallachia which created the cycle.

Vlad was no more brutal than contemporary 15th Century rulers....

However, this was the first impaling of Christians that Vlad engaged. And, it was both legal, and solved the problem; since the law said that a man executed by Royal Decree could not be held accountable for his bond, (debts), nor, could his wife and sons. The Boyars lost everything....again....

It was then that these political slanders, like dipping bread into blood, began to be produced by the Nurnburg Duchy.

As you can see, this was a woodcut, and common folk couldn't have made one of these, they were very expensive. But, the Duchy of Nurnburgh had artists on retainer, and could easily afford to commission a woodcut slandering its enemies.

The fact that this woodcut exists established Vlad's reputation, while simultaneously causing Historians to regard that reputation with extreme skepticism.

The conflicts between all-involved would result in tensions escalating until finally, they broke into armed conflicts.

The result was a desperate war with The Sultan's forces, in which Vlad, who nearly was defeated, ultimately defeated his brother, whose life as hostage to the Sultan had made him perfect, as a replacement for Vlad, in the eyes of the Boyars. But, to their shock, and surprise, Vlad survived, won the battle, and the war.

But, he was angry, and hunted down the Boyars he found hidden throughout Wallachia, for they had conspired against him: and Vlad then impaled these royals. This was his second impaling of Christians. Because he had violated the First Verdict against him, he was brought to trial this time by his benefactor, the King of Moldavia, and not by Nurnburg. He remained imprisoned in Stephen's oublier (a dungeon) until 1475. Upon his third rise, he was slain in battle against the Turks, while struggling to again, consolidate his Wallachian reign, in December of 1476.

Bram Stoker was a disabled, Protestant Irishman....as if that weren't bad enough, he chose not the French legend of Vampirism, but the Serbian Sava Savanović, a well documented vampire, and attributed Vlad's medieval plight to Savanović's legend.*

To this hour, each time Vlad is called a Vampire, the criminality of the Western church is increased, and a vital path to Paradise is accused by greedy assholes.

In the era of the Austria-Hungarian rule over the Balkans, at least two scientific inquiries were ordered into the Savanović Legend when people began turning up dead.

Both inquiries were headed by London trained physicians in the 19th Century. Both inquiries concluded the phenomenon was based in fact....
at October 31, 2018