A Frank Overview of the Confirmation of Brett Kavanaugh, and the Hearings...

A Frank Overview of the Nomination of Brett Kavanaugh, and the Hearings... 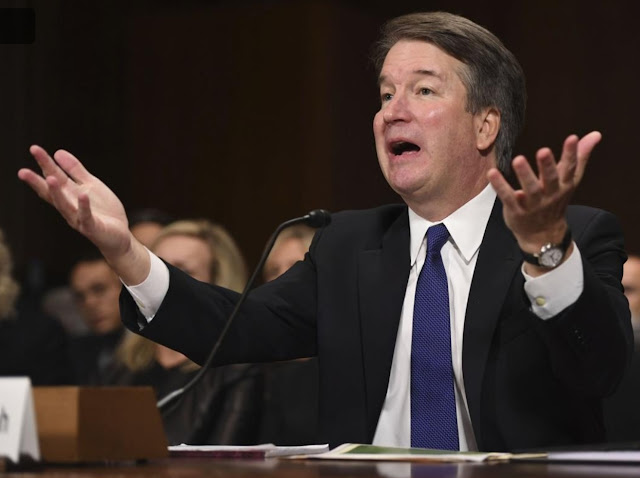 I am embarrassed by the American government and the “Charlie Foxtrot” we have watched over the past week – even the past several years. If you do not understand “Charlie Foxtrot,” ask a member of the US military, but only if you really want to know. I doubt any citizen of this country will disagree with that characterization. Perhaps, it is this embarrassment that will finally unite us. I have a plan, stick with me to the end.

https://en.wiktionary.org/wiki/Charlie_FoxtrotThe Kavanaugh Confirmation Hearings have been the most riveting not-made-for-TV drama ever. In fact, the entire production has been a study in all that is ludicrous prior to the start of the hearings. I admit, this is the first such hearing that I have watched from beginning to end. There were five to ten minutes that I missed because of a brief power outage and the reboot of the cable box. However, the power returned and the hearing was in the beginning of a break. I do not believe I missed much.From the moment President Trump announced the nomination, the very core of the “experiment in democracy” fractured and may still fracture more. It amazes me that people on the right and people on the left cannot find common ground. Actually, it is 2018, Trump is POTUS, and this enmity that exists is all too common. The left decried the nominee’s apparent conservative, they say, record. Maybe on some issues he is conservative. Having read nearly all of his 300+ decisions – yes, what a boring life I must live – I came away thinking that this nominee was quite moderate compared to all of the other justices I have seen in my short life. However, let us call him conservative for the sake of argument. Nobody has pointed to a single flaw in his findings of fact in any case. Nobody has pointed out an illogical conclusion based upon misapplied law or a faulty interpretation of the US Constitution.

Instead the Democrats have focused on the writings of this judge prior to him becoming a judge. Dare I say while he was a common man? They focus on advice provided as a member of the younger Bush White House staff. They focused on whether or not Mr. Kavanaugh should have known that documents, given to him in confidence, were stolen. The inference made is that because the documents went against what Democrats wanted, and that they were given in confidence, and that he was supposed to maintain that confidence, then the documents must have been obtained through illegal means.

Were these documents reported stolen and did the crime make it into the media so that Mr. Kavanaugh would have a way to know that the information was stolen? Nah. I did not think so. If I am to believe everything I am entrusted to maintain as confidential, secret, top secret, is the product of a crime, then I retired from the biggest RICO on the planet.Did any of the hearing have anything to do with someone being put forth as a justice on SCOTUS? Or was there merely a stage for each party to thump their chests? One party saying, we will never vote for that man. The other party saying that no matter what, Judge Kavanaugh would receive their support. In relationship to the start of the hearing, when did those great apes, posing as US Senators, start the chest thumping? Had this been an old fashioned quill and ink notification, it would still await folding so as to not smear the ink. However, we live in the age of binary electrons that travel at the speed of light and reach around the world almost as soon as your finger is lifted from the “send” key. The electrons had not yet stopped moving before these base political creatures began posturing. Was this posturing really meant to keep Judge Kavanaugh the man off of SCOTUS, or to ensure that the man Judge Kavanaugh was installed on that lofty bench? If you said yes to either premise, slap yourself on the back of the head. As my Scouts liked to call it “Gibbs yourself.” If you are not a fan of the TV series “NCIS” you will not get the reference.This entire farcical proceeding had nothing at all to do with the person of Brett Kavanaugh. If any of the great apes say it did, they are politicians who only lie when their lips move. Put simply, I will believe everything any twenty-one chosen-at-random thirteen to eighteen year old young people tell me, before I believe any declarative statement made by our elected representatives. While I may agree with an opinion stated by one, I do not believe there will be a day in my life where I would consider accepting one of them at their word. Frankly, the show that has played out since the nomination was made public – and now we know it started before the nomination was made public – has been an exercise in political gamesmanship. None of the twenty-one men and women on that committee represented anyone but their respective political party. Even when

Senator Jeff Flake, appearing as though he had aged ten years overnight, cast his vote, it was not for the people who sent him there: it was to preserve a friendship. However, he made the right decision for the wrong reason. Last night as I drifted off to sleep, a thought came to me that seemed important: split the baby. Pass Kavanaugh to the full Senate and either pause the floor vote, or hold the floor vote and delay the installation of Jeff Kavanaugh as a justice on SCOTUS until the FBI, CIA, MI-6, or some agency explored the allegations raised by Dr. Ford. My thought was logical and pragmatic. It accomplishes the only goal any American should care about: that is to resolve the diametrically opposed statements, and both very credible  testimonies of Dr. Ford and Judge Kavanaugh.

Either evidence exists that proves guilt, or it does not. Either way, we will be able say that America cares about who sits on the highest court. I tweeted that message to all of the Republicans on the committee, both AL Senators, President Trump, Vice President Pence, and a few other people as soon as I was awake this morning.

The hearing was about to begin by the time I sent the last one. Regardless of the hijinks played by political buffoons, we would know all that we could about the truth of the summer of 1983. That this act would somehow bring Americans together and unite us as one people was a fallacy or the save-face adjustments by the GOP.

Even if the FBI – of whom I no longer have blind faith to fairly investigate who farted on the back of the bus – offers 100% incontrovertible proof of who committed that act of sexual violence against Dr. Ford, and if it is not Judge Kavanaugh, the Democrats will still complain. I expect that. I expect the party of the minority to never be 100% satisfied with the decisions of the party of the majority. To expect otherwise deserves another “Gibbs yourself.”Yes, I believed Dr. Ford’s testimony, except I think that a long repressed memory that is being psychologically analyzed just before 2012 when Judge Kavanaugh’s name was in the media spotlight, set Dr. Ford up to create a manufactured memory.
This phenomenon is also known as false memory, implanted memory, or gap-filled created memory. https://en.wikipedia.org/wiki/False_memory_syndrome

The opening of the old wound and hearing and reading about Brett Kavanaugh, and factoring in her teenaged crush on him, caused her to supplant Judge Kavanaugh in place of the real perpetrator.

They pull tax transcripts and have their financial investigators look for obvious tells. If they see anything that is suspicious, they will chase down the thread as far as they can. Just like the basic background check, the results are all a summary of the facts gathered. The agency makes the decision. Any time you change jobs, or your clearance level changes, the background check starts from step 1 and continues through colonoscopy, MRI, and CT scan. If they think it is necessary, they may even do the equivalent of an EEG. Judge Kavanaugh will undergo an FBI EEG in the coming week. Too bad candidates for federal office are not required to get an actual EEG prior to their campaign. No matter how deep the investigators go, the report is on the same form. Though the color of the folder may change: literally.Democrats, your party has gotten its comeuppance for delaying President Obama’s last nominee. The ship is righted, the scales are balanced: at least as far as party tomfoolery goes on that topic. As a governing body, the only way to right that ship is term limits.Term limits are necessary to prevent the travesty of the past week from happening again. Too few people have way too much power. There are several members of the committee who have been on it since before Kavanaugh was in high school. For any one person to have influence over appointments to that position is not representative of the desires of the American people. This applies equally to every party. No person should hold a nationally elected office for more than a combined total of twenty years.

Nobody should be in office more than twelve successive years.

The only exception would be for someone who goes over that mark as a member of the US Presidency. To start, and to keep  continuity of experience, any elected official with over twenty-five years will have their seat open at the next national election. Anyone who would go over twenty years if they win their next election will see it as their last election.

Other than POTUS or VP, your national political career is maxed. This applies to the US Senators and the US House of Representatives. Further, the maximum time, including serving as a member of the president’s cabinet, shall not exceed twenty-five years. Total service, including a Presidential appointment, or any appointment requiring approval of either house of Congress, is also capped at twenty-five years. This forces our country to return to a government of the people, by the people, and for the people. This is either voluntarily put into law, or it is voted on as a national referendum. For those who are paying attention: that sound you hear is the handle on the swamp flusher and the powerful elite’s sound of power sucking away from them. Maybe once the flush clears the refuse the smell will not be so embarrassing. Perhaps putting the power back into the hands of the many will remind the few for whom they really work.
at September 28, 2018