Opcw, in some sort of timed trickery, has reversed its Douma finding, and now is saying that, "...the gas event in Douma, Syria, was staged..." 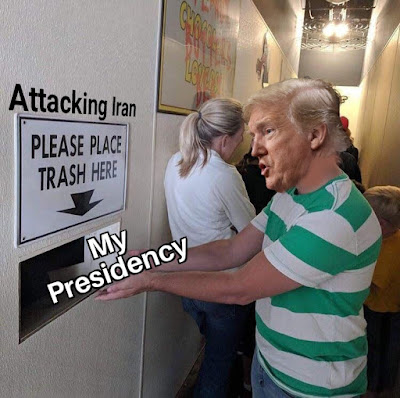 In the last month we had a lot of ups and downs. But, by far the worst in the, "down" category, was OPCW backing Trump on his unwarrented assault of innocent Syrian civilians. 50 civilians were murdered by the Nato attack, which was launched on Friday, 4-13-18.

Now, with the new finding, and with Trump facing both a Syrian and Russian petition in the War Crimes Court in the Hague, and the OPCW now backing their complaint, as well as his upcoming summit with Putin, later this month, which now has to leave the rails of anything Trump had originally planned: Trump himself is about to become the second president to resign rather than face the wrath of the American people, the international community, and God, Himself.

Trump, in his insanity, was about to attack Iran in what would eclipse the military retardation of ReBush. 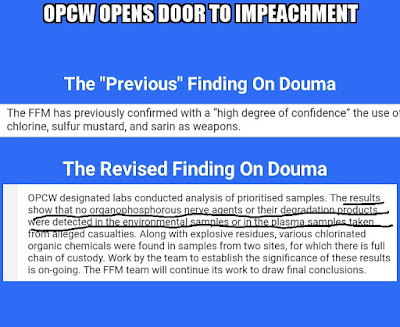 Now, each of the following people are guilty of violating the UN Charter, and waging violent and aggressive warfare:
After Nurnburgh, war crimes defendants lost the right to cite a defense based on the following of orders. Each of these people are currently involved in a conspiracy to create a world war against a treaty signatory, Iran, currently in compliance with all the categorical titles of an international agreement.

I had stated that Opcw falsified this finding. And I will post the link here, http://www.theotherkevin.zone/2018/06/opcw-more-international-organizational.html
acknowledging that they may delete the link on my link that stated Douma was positive for banned weapons in late March, of this year.

In the first link above from today's reversal, the OPCW says it located and abundance of consumer grade chlorine. This is clearly a statement that Opcw felt that this attack had been staged.

Two weeks ago, Trump, acting on the original OPCW report, which exonerated him, restored the funding for the terrorists who had staged the attack, the White Helmets. Now, that funding is evidence of his intent to violate international law on a regular basis, and to continue doing so against the sovereignty of the nation of Iran.

Syrian and Russian petitions of the War Crimes Court in the Hague had been quietly working their way through processing, and, when OPCW had previously stated that gas was found, that process all but fell from the daily news reports.

Meanwhile, in the House, real case for Impeachment has fallen into the laps of both parties, who are very interested in NOT repeating retarded NeoCon violence, ever again. European allies, too, are awaiting the removal of Trump as a war mongering idiot who is too stupid to comprehend that he cannot make peace in North Korea for the simple reason that they have good reason not to trust him.

This undoubtedly will have ramifications for the ongoing detente process in that nation, as well.

In all likelihood, Trump's presidency cannot survive the new year. Nor will military actions be permitted unilaterally without strict oversight by Congressional authorities.
at July 06, 2018