A History of eu for Americans 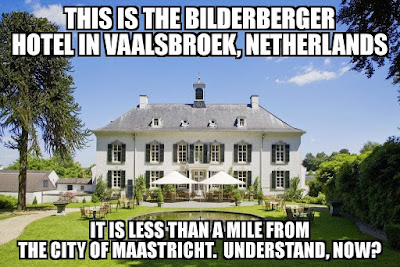 A History of eu for Americans

EU is not a "United States of Europe". It is the creation of a legalized oppurtunity to cause the rise of the Plutonomy in Europe, and to control resistance through an unending supply of pro eu vôters, and thugs, (Africans and Middle Easterners) willing to do anything their new masters demand just as long as the free money, and free stuff, keeps coming.

plutonomy•n: a system of governance whereby the extremely rich rule over the poor, with absolute authority.

The Treaty of Maastricht

In 1988, several European bankers gathered in the Maastricht, Netherlands, Bilderberger Hotel, and began to plot the monstrosity known as The EU. Since then, EU has lied, altered historical records, and basically connected it's existence to the six signatories of the 1956 Treaty of Rome, claiming to be older than it is. The Treaty of Rome was actually an agreement which applied to Marshall Plan monetary recipients, and their basic models for intra-Euro resources management for the specific purpose of manufacture.


It is typical of EU to embellish its shameful and offensive existence to appear to be "too old to stop". The EU became Incorporated in 1999. When, that same year, the 1988 group's founding instrument, The Treaty of Maastricht, was amended to include the necessity to permit UK to keep the Pound Sterling, or UK refused to "Ascend" into EU, the thing that is then began to breathe and stir about.

But, without UK, whose "5 Reasons To Keep the Pound", by Gordon Brown (future PM) and then PM Tony Blair, which nipped the EuroZone in its knickers (in British paralance), EU would've simply been yet another evil scheme that common sense prevented.
Oddly enough, the UK's doubt in the economic plans made by the architechts of eu was a demand that UK LIBERALS made.


Thus, when it became clear the EU couldn't exist without UK, the Maastricht Treaty was amended. This effectively destroyed the Eurozone (the original design of a one currency Europe), and there the seeds of Brexit were planted.


In 2001, the two-year wait for UK (as per Maastricht Treaty) finished, and the EU became organized under several intra digital hookups, including Artemis, an A/I database, and Target, and then Target 2, a digital nation state-level debt-resettlement device; Target is the heart of the UniPolar world.


(Although they flatter the US to believe our military and richest nation status defines the US as the world's sole super power, Target 2, and it's inevitable post Brexit update, Target 3, as well as that update's eventual reissue of the Deutsch Mark, is the ideological premature ejaculation and disappointment inevitably due to those whom entertain the insanity of trading ideology for common sense; the REAL UniPolar world is Target)


In those initial meetings beginning in 1988, before the Communist deputy to the East German dictator, and puppet of the Soviets: Erich Honnaker, could rise, and become known to the world as the ridiculous Angele Merkel, she was PROHIBITED FROM EVEN SPEAKING TO THE EU FOUNDERS.

Before that, Merkel couldn't speak to Westerners, nor travel out of the DDR! (EAST GERMANY)

Nor can eu honestly be connected to the postwar Conseil De l'Europa, whose 36 member-states included the non existent Jugoslavijan Republike, as well as The Soviet Union, itself. This is just simply another of the lies that eu tells...


Eu is pathetic. But, the devils whom planned it include Americans, as well.


The 3% Debt Ceiling Violation Means That EU Has No Real Authority....

From day one, the original member-states of EU agreed, as per the Maastricht Treaty, to limit their borrowing to no more than 3% of each member-state's GDP. This was to limit deficit, bailouts, and encourage economic innovation in a trickle-down leg of a basic trickle down economic model.


The 3% limit to deficits in each member state has never been kept. It would have been possible that this eu thing would've worked, if it had.
But, the problem is, ONLY THREE NATIONS HAVE EVER HONORED THIS.

It turns out that a bunch of fake money was poured into European Workers' pockets as a result of the "promise" to observe it, and this was merely a bribe.


Think that's a coincidence? They used the "windfall" of Lenin-esque "collectivization" to bribe the average European citizen with some prosperity, using a Jewish media to promote even more that never materialized, all which were SUPPOSEDLY the substantial results of a collectivized and financially unified European economy, and currency......which later had it's wings clipped first by Brenter, then, again, perhaps fatally, by Brexit. (Sound like ReBush's"Social Security rebates.....yet? Same devils, same plan!)


But, when Europeans did not yet know the rebates and subsidies which made the early 2,000's prosperous WERE, IN REALITY, the fire sale of European culture, economic vitality, and ancient historical treasures, they were all too happy to permit this to continue.

Enter Angele Merkel, fresh from inheriting the Chancellorship of Germany from embroiling scandals that ended Schroeder, her predecessor, in 2005. Merkel's claim to fame began not there, but later, in the invention, and then the convening of an EXACT DUPLICATE OF THE BILDERBERGERS STEERING COMMITTEE, the, "Treaty of Lisbon". 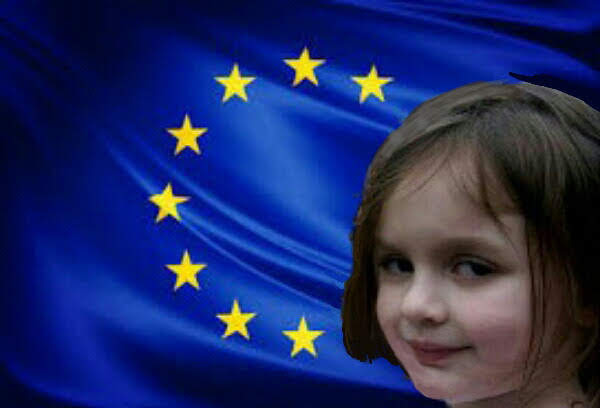 ....the Treaty of Lisbon was named and ratified in 2009. The effort that it resulted in actually began under Merkel in 2005. It was first intended as a Constitution, to superscede the Maastricht Treaty, and to resemble that of the US: elastic clause, and all....but that effort failed. So, in 2009, the treaty as is, was ratified unanimously by the then member-states of EU.....

Again the people of Europe were promised accountability from their leaders, again, were they dismissed; as the main products of Treaty of Lisbon, ugly people orgies, and hot wind: produced a dynamic set of excuses for the imminent collapse of the economy which is happening now...
But, this is where Merkel got her fame, as undeserved, and as destructive as her presence has been to Europe, this Lisbon Treaty, and it's resolutions, are the origins of her fame. It is why the Jewish scum see her as a mother figure.
But it recast eu as a plutonomy, and tried to hide this from the working European.


In this spirit, a new, and wild, and also overtly Communist disregard for Christianity, as well as a new lease on expansionism and exploitation into Africa, (see, BP in Republic of Niger) resulted in borders being flung open, and the 3% GDP model being abandoned, as each increment of permissible debt resulted in the nod to Jewish bankers, as they raised interest, then printed up the money they need from "their" unending supply of gold, the legendary stolen "lost Czarist Gold", which was just stolen from a martyred Christian king, and is to this hour, the real source of imaginary money being printed up....


And, the euro is falling.


But the efforts since the invention of the 2005 First Treaty of Lisbon convention have resulted in zero reforms, and one phony GASP (Growth And Stability Pact), in which, again, these people swore to lower their debt ceilings, and to restore economic, then actual order in Europe. Why, the Lisbon Treaty's founder, Merkel, as Chancellor of Germany: HAS DONE MORE TO DESTROY THE ENFORCEMENT OF GASP THAN ANY TWO MEMBER-STATES OF EU.


And, from the American bankers, to the European ones now sitting as presidents and PM's of Europe: they're almost entirely Jews.

And, they are driving from their secret meetings' goals, to fill Europe with scumbags and murderous thugs whom possess no respect for human life, whom despise Christianity, while they are simultaneously making it illegal for EUROPEANS to own weapons to defend themselves from these "new Europeans", by insisting that gun ownership is an issue of determination, one residing under the exclusive authority of the central government in Brussels.

Meanwhile, Christians are getting sick of the Communists, Muslims, and Jews, that ARE EU: whom, just this week, through EU agency, Eurofound, have begun a survey to ask, "How can we best normalize sex with kids?"
Below: French link, Psychologist explains the efforts to normalize pedophilia...
https://youtu.be/axqAEBTDOVk

In conclusion: if you hear Warren Buffet talking about a 3% GDP debt ceiling, remember: he is one of these scum doing this to Europe. Opening borders to Mexico is all they need. Then: boom! No order in America. Meanwhile, they continue trying to disarm us.

Keep in mind: what Satan did in Europe Christians must now undo. Let it not happen, here!

Because, this is a game to them.
PS: Still think Al Quaeda did 9-11?
Keep your guns!