What Is the Iran/Iraq Model of Analysis? 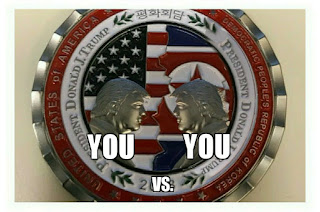 11 million Iraqis are dead or missing...and there were no weapons of mass destruction ever found....before the US attacked, the UN verified that Iraq was in compliance...

Recently, biased analysts tried to idealogicize a literary prison to which Kim Jong Un cancelled the Summit, then Trump claimed he did. I was awake in the early hours when Un cancelled...link below: 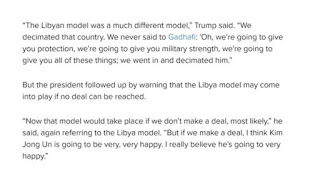 The Khaddaffi Model is flawed beyond belief! I placed the CNN article proving Un cancelled, not Trump. This model almost closed the door to peace, for a greater Israel...

What Is The Iran/Iraq Model of Analysis?

The Iran/Iraq Model of Analysis states that the United States, and her allies, will forcibly monitor, disarm, and attack nations, who are thus: in compliance. Then they will annihilate the population once that population can no longer defend itself. The US, and UK particularly, will engage the slaughter of those countries' populations in spite of the responsible international organizations stating that the nation is in compliance.

Syria is currently being victimized by US warcrimes based on the staged gas attacks. This is another example of a flawed US policy apparatus. The fact the US is using ISIS and other types of armed Arab speaking people in order to achieve regime-change is well known. The Iran/Iraq Model is preferred due to being quicker in bringing about regime-change. But, as in Iraq, where an anti US cleric was recently elected president, the US strategy is clearly a sickness of the soul that seeks only violent conclusions. It is otherwise, ineffective.

Once a state has been alienated by the US, the compliance end of the agreements no longer become necessary, since the Iran/Iraq Model indicates that US forces will commit genocide, anyway.

Therefore, the oversight portion of JCPOA will either be deported by Iran, or the militaries of the nations remaining will have to sign a pact against the US-sponsored atrocities and genocides, and avow not only to refuse to attack the compliant nation, but further agree to defend its citizens. This shall need to become standardized in order to prevent further escalating the world war.

In this manner, Iran should have no military involvement in defending the attacks due to the US president announcing that JCPOA violations are his reasons for attacking. Once the UN confirms compliance: Iran should meet with the three nations of EU, Russia, and China, and via announcement to the Security Council, the military treaty made known to the US via their UN délégation.

In the case of Iran, we realize that their government is in compliance. But we also recognize that incompetence in the Oval Office in the United States is mandatory for the Iran/Iraq Model to become full-on UN Charter violating warfare…

This is not in reference to partisanship. This is in reference to the president knowing to reject, review, or block efforts either to make Israeli prime ministers American Secretaries of States, or Defense, or their embedded analysts permitted to create larger volumes of influence via a flawed analysis critérium, misunderstood communication from potential detente negotiators, or incorrectly translated meanings for what otherwise was an insignificant event.

Under no circumstances should the current contracted analysis firms which created the Khaddaffi model be permitted to continue, or be retained further in the matter of North Korea. Clearly the firm does not have one iota of knowledge of the subtleties of Korean culture. It is a matter best left to either Americans who do know Korean culture, or to Korean analysts allied with detente. Koreans should continue these efforts. 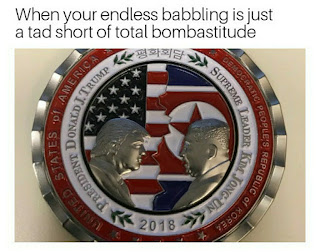 The following is a list of diplomatic goals that the US does need to adapt and format:

3.Recognize the bias in the pro Israeli lobby in the State Dept, and various consulting institutes, is a path to nuclear war, and not to resolution

4.Develop stronger relationships with the current regimes that had been targeted

6. Use the military only for defense of the UNITED STATES, not in support of Israel

7. Use military force IF the JCPOA is actually violated, and violation is confirmed either by IAEA, or OPCW
This is clearly a living model of the unfulfilled UN Art 80, which was successfully added to the UN Charter, and which the US keeps in limbo via its UN veto.
That veto needs to become recognized by the UN, and removed: insomuch as the international community can no longer fail identify that Israel is behind 100% of the antagonizing of the earth due to the knowledge that it's creation was a warcrime.

The US passed a bill into law that stated that neither Palestine, nor Israel can be created by an act of either the UN, or its Trusteeship. This entire mess worldwide is directly due to the paranoi that created both article 80, and implied the UN could create or terminate the existence of a state by not confronting a paradigm arrogance in Jewish pursuit of safety which cannot be created by war nor peace.

There is no disposition for continuing to grant Israel a manifest destiny which incurs violence as it defends its violations of the UN Charter by citing Article 80: in the Iran/Iraq model, Israel is the most active presence engaging in espionage, murder, and in an ongoing process of extermination of the Arabic speaking peoples as it seeks more land to occupy.

This is the heart whose beat can no longer be tolerated by the international community.

In granting the existence of Israel, the UN abandoned the rights of the peoples of Palestine who were also protected by the UN Charter.

This is the path to oversight which the UN has had to contend due to a massive pro Israeli bias in the US culture. That bias is fading, and the question is clarifying: an international response is necessary to define and prevent the results of what will be the final outcome of permitting an unmonitored Israeli nation to cite Article 80 in its endless processions of war crimes.

If the Security Council cannot enact this plan: then the Grand Alliance Against NATO can, and should declare war on the United States, The United Kingdom, and the modern state of Zionism.

The results of that war will be the termination of Articles that permit the UN to create a nation, and thus the military adminstration of Grand Alliance members over Jewish people and Palestinian people shall terminate the worldwide agitation which has only one outcome.
at May 25, 2018