The Assyria Principle states very basically that when one nation oppresses its neighboring nations, or a small group of nations begin violent and aggressive warfare against the rest of the world, that the remaining nations will put aside their differences, and destroy their oppressor; even if those nations' hatred for one another runs very deep.

It is named for the process which finally dispatched Assyria from its crimes against the people of the ancient world.


Whether in the alliance of Greek city states that overran Spartan rule, or in the Alliance Against Napoleon: the Assyria Principle is a unifying thread of common relation, a link, if you will, between the ancient, and the modern worlds.

When we discuss the fall of Assyria, we are discussing the fall of that kingdom's Neo period, although we recognize that in its primary, or Old Assyrian form, that the same kind of lessons were learned. And that both Classical and Neo Assyria fell by alliances that destroyed Assyrian rule in both cases, and ultimately ended Assyrian dominance over the ancient world, altogether.

Most historians note the incorporation of Israel and Egypt into Assyrian rule, after 801BC, and the battles fought by Israeli and Egyptian Kings, who were unified with the NeoAssyrian empire; being halted by what was then an international alliance.

This alliance with Israel and Assyria caused God to engage the dispatch of the Tribes of Israel except Judeah, and via the Roman Empire, He would fulfill Judah's destruction.

Old Testament buffs will recognize the name of Nebuchadnazzer, the Chaldean, whom took all of Israel into his hand by the will of God, as part of the dissolution of the Tribes of Israel. Nebuchadnazzer also vanquished Assyria.

Military strategists can never overcome the Assyria Principle, however, and though modes of warfare have changed drastically, the themes of humanity resisting a smaller number of oppressors by putting aside their differences, and fighting back, have not changed. 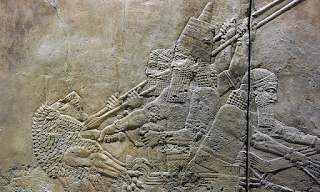 Assyria's empire was like later Huns, and Mongols, a horse kingdom. Chariots were highly employed, but after Alexander's destruction of Persian Armies outside of the plains of Guagamella in modern Iraq, which was much later, chariots were never used again.

Rome's second and final conquest of Brittannia, at least on its surface, seems a defiance to the Assyria Principle. However, when we factor in the limits of Empire experienced by both Augustus Caeser, and Hadrian, as well, the Romans, at least at some point, owe their longevity as a world power, at least in some part, to observances of the Assyria Principle, or, as in Augustus's case, the loss of an entire army in the German wilderness due to having failed to do so. That loss, which pitted a Germanic former Roman mercenary against an entire army composed of three legions of the Roman army, exposed both the flaws of imperialism, as well as the burning need to address elements of the Assyria Principle which, due to the far reaching sojourns of the Christ-Age Roman Empire, as far though they had been, the themes of the Assyrian Principle had, until that point, and for any number of reasons, been unnecessary.

The lessons of the Assyria Principle were thus unaccounted for by Roman strategists in the architecture of the Roman models of power.

Hadrian erected his wall across the northern plains of Brittania to keep out the barbarian Jutes and Picts, modern day Scotsman. But, had the Gauls and Druidish nations in Brittania allied under a wider-reaching pact than the Gallic-only pact which failed Vercingétorix in Elysium, in modern France, then the Roman Empire wouldn't have been successful in either of Julius Caeser's invasions, (50, 54 BC) nor in following Roman rulers' invasions of the isles some ninety years later. (Cladius, 43 AD).

Caesar's invasions, in 50 and again, in 54 AD, were cut short due to the civil war that made him emperor. Yet, his extreme and (by modern standards) cruel dispatch of the Gallic Commander Vercingétorix was directly due to Roman fears that Vercingétorix would do exactly that: convince the Europeans in Britannia, and throughout Northern Europe, to withstand Rome.

This is, in no small part, due to the successes of Hannibal Barca, the finest general of all time, uniting Carthaginians, other Africans, Iberians, (Spaniards), but strangely enough, few Gauls, and invading Rome in 202 BC.

By the time Rome invaded Brittannia, Romans knew to limit their reach, and their atrocities.

In Greece, the Assyria Principle experienced what is perhaps, it's most vital lessons. This is due to the fact that so many of it's elemental lessons are forged in Greek unity against Persia, which was, according to the Assyria Principle, prudent. But, then those lessons went unheeded during the ensuing Pelyponesian Wars, two civil wars pitting Sparta against Athens, then later, Sparta against a unified Greece led by the city states of Arcadia and Thessalonia: which finally ended the Spartan occupation of Greece, as a whole. In fact, Sparta vanished from history following Greek Macedonian General and King Phillip, father of Alexander the Great, as he now unified Greece observing the lessons of the Assyria Principle, in preparation for a possible foil to Darius 3 in Persia.

But initially, Sparta's wishes to dissolve their alliance with Athens are in accordance with the Assyria Principle.

From 460-404 BC, the preservation of the Delian League, which unified two very distinctive cultures in that of Sparta and Athens, became a conflict that brewed between the two former allies, casting them into violence. This conflict, at its essence, pitted the non sensual, non scholarly Spartan view of the world, against the quite opposite Athenian view of the world. Though allies, the two couldn't have been more different. Those differences began to show after the dispatching of their common foe, with Athens trying to keep the Delian League around while Sparta perceived that intention as a threat.

This was the source of antagonism that saw the Pelyponesian Wars fought on a continual basis. It is for this reason, the turmoil ensuing over the Delian League, that the termination of non necessary alliances is a lesson of the Assyria Principle.

When first Phillip, then Alexander unified the Greek city states under Macedonian law, the lessons of the Assyria Principle were soon to come home to Persia, who with very little reform, basically rebuilt the Assyrian Empire: lessons, and all.

The Alliance Against Napoleon was formed to halt the French conquests and looting of continental Europe. The unifying heads of state were not always cordial. For example, Russia had sided with Napoleon, and it was the Russian betrayal of him that did Napoleon in at Waterloo. But the strength of the alliance was not able to hold, as the Russians slaughtered the alliance members during the Crimean War, demonstrating just how tenuous some of these historic alliances were.

World War One and Two
Actually the 1890's Franco/Prussian War, over the Alcese-Lorraine, is technically the first world war, as these causes also figure prominently, as do the names of those whom fought in it, over the next fifty years of fighting in the First and Second World Wars that we recognize as traditionally that. However, the Franco/Prussian War was when European powers began picking sides, and the Austro-Hungarian side had much, much fewer resources in its influence than the British and French whom they fought in the field.

At this point in US History, England is not an American ally, and the US navy was being designed, and till the mid point of World War 2, remained under a design that geared it primarily for engagements against the British navy. The fact that Britain dumped her imperial burdens upon the US, prior to then anti Colonialists, like Roosevelt and Truman, being able to get the country free of the lessons that greed and imperial foreign policies have (not) taught us prior to the ignorance of the Assyria Principle being woven tightly into the culture, remains the source of most modern American mistakes, diplomatically, as well as militarily.

Lessons of The Assyria Principle...