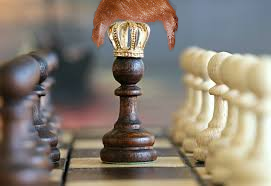 As the hours tick by, we are literally within days of a lethal blow to Globalism in the locked Parliament in Germany. The world's tormentors shall begin to buckle and collapse, allowing the will of the German people to, once again, return to the expression of Christian values that it has always aspired to show: European sensibilities and work ethics, efficiency, and fairness. No room for Unipolar Worlds. No room for Political Science Fiction. No room for Merkel.

I. NATO Breaking Up

A. Unrest Quantified
B. Time Wasted on Merkel Is Too Wasteful

A. Israel Has Doomed Itself
B. Syrian Defences Are Holding

Conclusion: the vitality of NATO is rotting from the inside out. Therefore a newer, smaller, and a more modernized and practical alliance should be convened.

Return From the Brink...

The War That Comes seems postponed for the moment. Hard to say whether this is a temporary glitch or yet another desperate armed-passant in US deep-state pro-Globalist personnel. By now the awful price of ReBush's and Obama's dead hold on power is eating the careers of their friends. Hard to say whether it is worth the tremendous sacrifice that these individuals are being commanded to perform.

At this time, Andrew McCabe's quiet blackmail threat is from one of their own: should he approach Witness Protection, Obama, Wray, Meuller, Clinton, and Lynch all shall hang. Even as the long dilapidated and desperate Meuller Investigation dies to the laughter of the people whose agenda it could not prevent: the voters in the United States.

We are coming off of a Winter and into a Spring with the msm touting Turkey's "defeats of Russian-backed Kurds in Syria". The reality is quite different. The reality is Erdogan helped the Kurds, whom are both IS, and resisting IS, out of his national borders and back onto the path of the unending suicide of the Kurdish race.

That suicide includes the formation of IS, and the US/Israeli-backed attempt to "liberate Syria for their occupation".

This is not the worst US policy ever, but it stems directly from it, and demonstrates the power of the Globalist/Bilderberger bipartisanship, as well as misgiven wills to power.
By now, in the United States, the average citizen is all-too-aware that treason, murder, and annihilation of the American world view has been an effort undertaken since the 1947 National Security Act.

It was not the act that did it: but the far-reaching orders of power-delineation which were made possible by the act. The treason was in the details, along with the Globalist agenda, and the US silver that once backed its dollar. As that silver departed, a dollar entirely backed by nuclear war/military might was left in place of that silver; the result of Globalism between 1953 and 1974.

This created the petroleum dollar, and via petroleum dollar analysis, the moves by ReBush/Obama to, "Arm, then create the Islamic State from disaffected Kurdish peoples" makes a sickening sort of sense.

In this, the US, as well as her allies, found themselves fighting for the identical causes as the Russo/Sino/Persian Alliance, an alliance whose potential challenge has been carefully cherry-picked from the narratives of the daily news.
The US, in fact, had signed deals with Russia: but due to Mossad interference, and British betrayal of both the US and world peace, the US left that alliance stupidly on April 7, 2017. But, the forces within and without Washington that caused that alliance to cease were to be in for a series of rude-awakenings.

The alleged Syrian gas attack, rumored to be a Soros-UK backed false flag op, has been proven to be thus when, in November of 2017, US Defense Secretary Mattis announced that his investigation of the event also concluded that it was entirely contrived in the media and "certain national parties".

This finally has caused the shift in US policy that was announced very recently. Donald Trump announced, on April 2, 2018, nearly one year to the day of the false flag, that he plans to leave the Occident; in spite of bitter Israeli protest. The Israelis are in convulsion, and that is also being unreported in the world press.

NATO nation, Turkey, is in the process of breaking with NATO due to its incompetence. It is not simply that an ally, Gen Joe Votel, attempted to overthrow the Turkish government, but that he also failed, and that failure demonstrated to Erdogan that the alleged power of NATO is no longer in-step with the world that has changed, while NATO has not.

And Russia's establishment of missle bases within a NATO nation is the latest of twenty plus years of demonstrations of how badly the role of NATO has been in need of a drastic redefinition.

Thus, the convention of a new, much smaller alliance is in order.
Observing the pure evil of the nation of Israel: unless this alliance detaches itself by clearly defining that it is not Israel's second army, then it, too, shall fail.

This obviously denotes that the move that most avoided the war that comes, the US recognizing the gall of the nation of Israel, in its willingness to resort to trickery to keep it's allies dying while it pursues "lebensraum" in the corpse of Syria, that the fall of Israel is both inevitable and divinely-ordained.

The Globalist Lobby within the nation of Germany is finished. Like Italy, where the fact that it is finished was determined by the returns of the recent Parliamentary elections, Germany and France had a disproportionate amount of non-Europeans voting. Even so, Merkel truly lost, and that loss is deadlocking Parliament even while we speak.

The role Germany must take as the sole power remaining in eu is chiefly economic. Germany's economy is increasingly ailing. And this, too, is kept out of the msm narratives.

Germany has always had about the same, or higher index count of economic turmoil than the US, by comparison. The basic comparisons of interest rates tells a story of a strong economy when the US interest rate was 7.5, and the German interest rates sailed toward double digits and stayed in them throughout the 1980's. But Germany's overall economy was booming.

One oppurtunity, which presented itself to German officials during the expansion, and the collectivising of european economies, and, under bad advice, was to effectively reboot it's economy, seeking a wider bond market profile, through which, the artificial lowering of interest rates would cause less macroeconomic damage. This has failed to incite business, particularly small businesses, due to the high overhead taking the form of standardized eu regulation.

And this has killed the middle class in Germany.

The voices of Germans disaffected by the refugee state that they have awakened to, from 2009, till now, are beginning to grow louder and more organized. And, they have petitioned like-minded Parliamentarians: the hegemony of Maastricht Germany is on the table and coding.

The refugee crisis in Germany began in the fifties, and accounts for the needs for an 11.5% interest rate during the 1980's, while other, more practical Western nations had interest rates of 5 and 6%. But eu redefinitions of such things as borders and banking regulation have taken their toll.

Germans recognize that each hour she remains in the PM chair represents yet another and increasingly painful season of despair, and the Parliament is unable to continue the illegal coalition that was formed out of desperate measures in January of this year.

Due to the lethal blow that Merkel's resignation implies to both NATO and eu : barely any press coverage attends the public's right to be informed to this hour.

And Germany's ailing economy is going to serve as final and resolute proof that Globalism doesn't work.

In secret, Merkel has begun the process to reissue the DM in direct violation of both Maastricht and Lisbon treaties. Parliament members who have the need to know are leading the revolt.

Their logic is simple: while it is true that the Pound Sterling is now no longer backing up the euro, (and becomes fully effective in one year's time) if the DM reissue is completed and Germany officially nullifies it's part of the Lisbon arrangement by duly informing the Chair of the European Commission, then the amount of economically unresolved refugees pouring into her borders will cause the bottom of the reissue to drop. And the ensuing loss-of-ground will invariably wound the economy into depression. The whole of eu Europe would be doomed to follow.

Therefore the fourth Reich must cease, and political viewpoints that recognize this must take the center and displace the neoMarxism of Merkel from the center back to the far-left from whence it came.

Peace in North Korea is the greatest triumph of US foreign policy in recent years. It is even greater than China opening her doors to negotiation during Nixon's administration, due to the fact that political ideologies are not behind this move; there are no two superpowers being played against the middle by North Korea, as in the case of China.

Thus, the opening of North Korea is being prompted by a self-assessment of both nations,  and the general conclusion that an update in foreign policy parameters, as well as a desperate need for reforming the divisions of old, are certainly in order. And the reunification of Korea, while economically taxing, would be a coup for the entire population of Korean people,  suffering under a procession of foreign conquerors since the nineteenth century. Autonomy and cultural Renaissance in Korea would quickly re-establish the sensibilties of the multi-polar world. And this, too, is a direct result of the failure of the political science fiction of the Unipolar World. And this is also representative of a lethal blow to the generalizations that strictly limit the analyses of globalism.

The world is populated by diversity. Diversity which is not accounted for in the acts of Giants like the WTO and the Globalist ideal. We cannot consolidate the Korean diet to Americans, and vice versa.

While the Globalists pretend to observe diversity, their latent goal is to destroy it.
Keeping that at the forefront of American negotiators shall be rewarded with a Korea reborn from the womb of wars, divisions, despair, and triumph. And the US is living up to the example it best illustrates not as a military power, but as a peacemaker.