The Russian response will affect the United States by Wednesday, April 18, though fakenews enemies, CNN, and Donald (Negative One) Trump appear united in their efforts to ignore the fact that Russian contingency plans are underway, already. 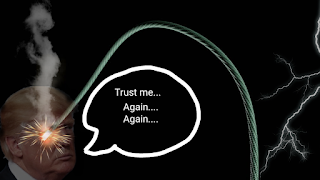 As the intelligent folks of this nation try desperately to ignore the dissolving Second Amendment, and the sickening feeling inside that says, "Run!" though one knows not where, or why: the ever slimming support for Mr. Trump will only exist in news orgs that have his name in them, or are funded by his PAC, and his ratings will mark their lowest, ever, on an unredeemable downward trend were the Russian response actually be greater in hours than the instant one, which they seem to expect.

It strikes most as odd that the NATO naval and Air Force units were not immediately confronted, but the fact remains that when the Russians respond, it will be in a wider theater than the Syrian Mission calls for. It will be after their alliance has had time to convene, and to designate roles for the armed services of each of its members, as the Syrian conflict does not provide sufficient resources for an immediate military response. And the actual fighting will most likely follow an official declaration of war, which would bring most American military planners a lot of grief: since this type of war immediately excludes containment strategies as a methodology.

Therefore the initial counter-attack will probably come in the form of a cyber attack, and shall affect the power grid and communications of the US military industrial complex by mid next week, provoking an intensifying conflict that the US has grossly underestimated.

<[Below: a compilation of proof is still ongoing, but by going to the Organization for the Prohibition of Chemical Weapons FB page, you can view actual gas attack victims, and it is evident and clear that these Syrian attacks have had a five year history of forgery.]>
https://www.aljazeera.com/news/2018/04/significant-opcw-mission-syria-180414172641027.html
Link to #OCPW Fb page....  https://www.facebook.com/opcwonline/
This proxy cyber attack, which is already underway, is meant to distract NATO attentions.

Though seeming to it's US defense technicians to be manageable, it is actually only a check written to buy time.

Time with which the high confidence status of the Russian commitment can be matched by the members of each of the member states of the Russo-Sino-Iranian-Turkish Alliance. And time is on their side.
But, in the wake of the Russian ambassador's announcement that a "predetermined set of events" had been implemented, and that set of events not involving Russian news cameras and high levels of teutonic Americana propagandizing, the absolute bombastitude of the American efforts to assist NeoCons and Rothschilds to steal Syrian oil almost seems concluded.

This actually will be the end of the dominion of the English-speaking world. And, it is, however briefly, the advent of a new world order of Slavic and Chinese Dominion.

And, hardly anyone seems to notice...