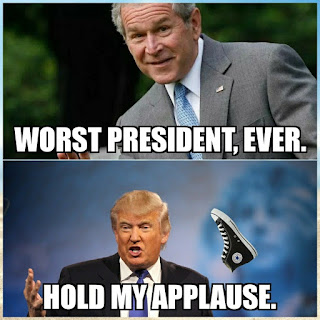 By: Kevin Drummond April 29, 2018
The April 13, 2018 NATO led air strikes against Syria mark a historic turning point. The United States hasn't changed, the rest of the world now realizes that the US is too far gone to know it needs to change...

All Democrats are Globalists. All Republicans were, until Trump...but we know classify him as a second amendment opposing, abortion supporting, Globalist.


The blowback for Syria will contain two theaters of perpetual damage: it will be used to elect and end R Dominion in the House, the Senate, and possibly even governors, and it will be used as proof of a dozen negative truths about Donald Trump that he is in no way prepared to handle; or, at least, handle in the "right fashion". Yelling over his opponents won't work, anymore. Nor will he find a nation, nor a support base, quite as willing to overlook his obnoxiousness as an orator as those to whom he once swore that fifty years of bad ideas ended by helping him make America great, again. The cat's out of that Globalist bag, now. He bombed Syria in a Globalist agenda made possible by false flagging one gas attack, then, a year later, he repeated it, word for word.

Just last week, he, and French Globalist President Macron, discussed openly the cover story that Trump will pull out of Iran. Then, like Globalist scumbags, pretended to oppose one another in the media. They are so gone on drugs, they don't know how transparent they have become: Trump will not leave Iran! But, he must make good on the money owed, or leave. He plans to do neither. He actually thinks he has the Iranians fooled....

Syria marks a turning point for the United States, in general. In the UN, the US has always enjoyed a strong identity. That identity made it possible to regard the UN as a sounding board for the Anglosphere since it's inception, even notably playing a vital role in resolving the issues that nearly caused the Cold War to go hot in the 1962 Cuban Missile Crisis. This is it's best work, preserving peace. And, the UN has never existed for a single twenty four hour period of time in such an attitude that did not project that US policy makers were the driving force behind the bulk of its work.

On February 5, 2003, during his Case for War speech, SecState, Gen Colin Powell, touched-off a process of unending damage to the United State's identity in the UN. This has already affected an increasingly narrow angle of view from other members of the Security Council, and, this new suspicion of the US has stopped the US twice from obtaining binding resolutions permitting NATO to attack Syria.

NeoCon blowback in the UN, in what may prove to be the last line of diplomacy left on earth, is something which the US cannot afford to continue risking. Yet, in NeoCon "bravado" that is, in reality, concealing a secret war, and depends on a voting base to regard these atrocities as "patriotism", Trump has now not only declared war on Russia, he has declared war on the entire international establishment!

And he has opened up a giant gap into which, waiting DNC party officials are lining up to insert their collective foot...and as bad as Syria is for the United States, the NeoCon R party is easy for the DNC to renew its pursuits of mad socialism, and envy of the failing eu, and this means further harming the nation.

NeoCons view the ACTUAL unifying principles of the UN as a mere shield which deflects the accusations of it's policy of blatant violations of human rights, and the waging of pointless, permanent, and extemporaneously aggressive warfare, and is hesitant to adapt to the evolution of its role in the Security Council following the fall of a two-superpower world.

As a stage to project the exploitation of diplomacy as a means to conceal its military/extra-national policies (like assassination, or regime change) is how the Communists viewed the UN, as well. In this fashion they deceived the international community and invaded Afghanistan in 1979. The United States owes it's loss of diplomatic clout to a refusal to engage burning needs for reform that altered the US's international identity due to both the collapse of the Soviet influence-sphere (1989-1991), and the emergence of a system of international diplomacy that observes smaller, more pragmatic aspects of strength, wealth, and culture. In short: the rest of the world has moved forward since 1991, while the United States is still pushing it's victory over dynamic Communism some thirty years after the fact.

This major lack of innovation, and tendency to engage a set of analytical perspectives that permit myth, lies, and illogical pursuits to be expressed economically as well as militarily, is the single greatest indictment of American Democracy in 242 years. Among notable areas requiring urgent and comprehensive reform is The National Security Act of 1947. And the conspicuous, and out of both touch, time, and out of place results of these steps not being taken appear to engrave into stone the showdown military, then culturally, made inevitable by NeoCon/NeoLib warfare exportation.

This refrain of bad policy, overreach, and extortion that the United States has reverted to tends to make it weaker than nations of the Eastern Hemisphere, where reforms begun in 1991 no longer provide any sort of factual basis from which, in a strange way, we might admire our own reflection, and be comfortable with the things we see.
at April 29, 2018

Email ThisBlogThis!Share to TwitterShare to FacebookShare to Pinterest
Labels: Syria, Trump, US identity in Int Org