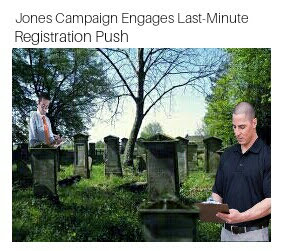 If you live in the State of Alabama, you have undoubtedly noticed the constant tests of the Emergency Broadcast System (IPAWS), and the increased frequency of the annoying alert signal, and freaky voice.

There is no doubt remaining, a recount has been triggered as fraudulent Jones votes should be removed from his tally. This is most-likely going to be completed within the week, and announced as a recount on the 22nd of December, although the State of Alabama already knows Jones has lost, and we all know what is about to happen...

In 2002 Bob Riley conceded the Governorship of Alabama to Don Siegelman, but recanted shortly before midnight. Then, a recount was ordered, and Siegelman lost the Governorship to a recount. This is something we have had to do, before.

It is without a single doubt that fraudulently registered voters were bused-into the state last Tuesday, as well as some truth adorning the many reports of Republican ticket voters claiming they were barred from voting by last minute de-registration, then red-taped until court houses closed.


This video features a full confession made by a voter who was one of many that were bused in, and allowed to vote, though he is neither from Alabama, nor registered to vote here, legally.

The most laughable thing is how the mentally ill lost the Russiahacked fight, and thought somehow, the State of Alabama would be a good place to visit their revenge.

But their revenge was also based in their immorality, and clouded wit. The numbers in Election: 2016 have suffered recounts, which were stopped by Democrats after the tallies for Trump grew higher: revealing that, in Wisconsin, at least, their cheating did not help.

Like artful dodgers, they avoid hard numerical facts, preferring imaginary evidence and misunderstood statistical data to contest historic fact: but this is not magic. It is a science.

And the cheating says more about the cheaters than they realized.

They didn't realize how recounts work, for instance, nor that either candidate can engage one. They tried to hit numbers so high that, when the total vote is counted, the inactive list of voters will have to start appearing in the returns. Some inactive voters are inactive due to their being dead...!

Also, most importantly, the cheaters didn't choose the right candidate to cheat against. With the vanishing of the allegations by a stunned, and suddenly withdrawn, Gloria Allred, you have a lying Doug Jones exposed....

And you have widespread reports of fraud, and a black contingent of voters attempting to free itself wisely of the Democrat Party, unsure if Phenix City's votes should be allowed to stand. Most importantly, you have otherwise ignorant people taking an interest in political science.

But that interest, while wanting history to rhyme, in terms of their assertions about Russiahacked, and how somehow that should be assessed against democracy and the State of Alabama, that interest lacks anything close to a working knowledge of how this all works, and prefers to hear only what it plugs its ears and keeps repeating.

And the cheaters depended upon this group not only to verify the appearances of an actual number of voters, but the cheaters also expected the state to trust the outside influences prevailing now. And Alabama was prepared for this attempt, and is playing its cards prudently. The Governor, alone, is responsible for mail-in ballots. The 6,000 eballots are Merrill's responsibility, but the mailed ones, she alone tallies, and like digital votes, the ballots are destroyed upon counting. She can undo this Sorosian scheme yankees and godless folk have visited upon the State of Alabama.

But I would not think it odd that National Guard has been quietly set on reserve: for when those who think they can act as the muscle of cheating and amoral men, decide to burn a city or two in Alabama. We tend to volunteer to defend our homes with deadly force. And, we depend upon our Governor, and Roy Moore, to dedicate that much to our democracy.

Make no bones about it: at least a part of mental illness is based on an inability to percieve the same reality as the majority. And, the majority did not vote for Doug Jones. And the evidence is there, along with a state moving swiftly to quietly do what has to be done, not just for democracy, but law and order.