The international press is not Germany. The accolades they offer do not conceal the hemorrhaging time, and dwindling alternatives to snap elections looming following Advent, when the murmurs will become screaming demands... 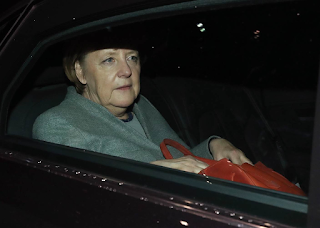 Were I Frauke Petry, Altenatif fur Deutsland party persona du jour, I would be watching how I viewed the conspicuously-eu friendly American press. The press is lauding Frau Merkel as target of praises and symbol of Globalism's relevance and vitality. This, after all, is the same Neo-Marxist whom has exhausted the concepts of Democracy until a shift right (hopefully) will be the extent of the damage.

Forbes, digging up international praise from Arabs, and its own, "Woman of the Year", (yeah: they have one!) may simply be engaging the duplicitous and constrained, "goodbyes" to Globalism. And this, and not serious convictions that Merkel's political career can survive this coup, may be actually be the inspiration behind the process of sounding some kindly worded goodbyes to her. As meanwhile, British and French politicians, question loudly the future of eu. 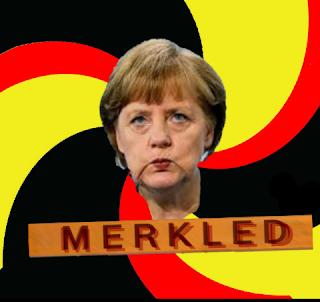 The beat may go on, in the press, but in Berlin, and throughout Germany, the right-come-center small majority and minority parties, whether or not they have accepted a "pro-eu stance", are yet in conference, prepping the host of personnel whom will occupy any number of roles, as their parties' platforms and the stars within now must rise, to fill the void left by almost twenty years of Merkel's influence, and fifteen years of her mismanagement, misrepresentations, and betrayal of the German public.

Perhaps the positive spin is actually a tearful goodbye. But sticking, like glue, to the meditations of German people, (not migrants of eu enjoying counterfeited German citizenship), but the concerns of actual German people, have to be how close they were to losing control of their democracy by reason of the migrant vote electing her, and their government becoming the last stand for real Germans on earth. Their government!

It could have been over for them, had eu offered incentives for roles in elected offices for migrants willing to learn to speak, and understand German life and culture enough to serve in Parliament. They were saved by their language. And, that window could still close.
Below, another article
http://www.theotherkevin.zone/2017/11/hegemony-penalized-restoration-of.html?m=1