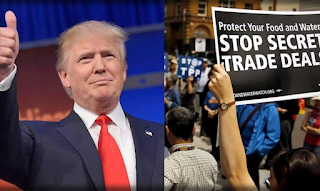 This is a simple question, which of Donald Trump's choir of Merry Men will be the next to ease out of the Orange Crate Opera?

Part One, The Cabinet Level:
Elaine Duke/Kristjen Nielsen-Homeland Security Secretary
At the level of cabinet members possibly departing the Trump Administration we have already the uneasy presence of corrupt long-time Beltway insider, Elaine Duke, whose erstwhile successor, Kristjen Nielsen, was, or was not shelved as a possible replacement after remarks she made, or may not have made, which contradicted the inflexible Donald, resulting in her being possibly pre-dis-nominated, which may actually have made cabinet history.

It seems the on, then off, now on Nielsen nomination has passed the HSGovAff Committee, but if she cannot learn to keep pro-choice remarks to herself, then the pop-art politically conscious Donald may not be able to be restrained from uttering those two famous words which every soul underneath the missiles of his oversights would soon give anything to utter to him now...but it is my job to be content with the pure ignorance of people.

If it does break any real records for the haste with which a secretary was nominated, and then was shelved, then I would be surprised as that would just seem unlikely in our 241 year existence. But, in the 15 year existence of the Department of Homeland Security, this is not actually hard to do.

Rex Tillerson/Secretary of State
It would seem hard to believe that Trump's vaguely recent defense of alleged remarks Tillerson may, or may not have made about his boss's clearly deficit intellect are not the first shots in a battle for Mr Tillerson to remove himself from a State Department centered on sanctions, leverage, and making him the Angel of Death bearing those ill tidings to a host of nations already disgusted with the fist-swallowing by-proxy diplomacy style Trump expects Mr Tillerson honestly, and seriously, to convey.

From all outward appearances, the chord which suspended Sebastian Gorka's much-anticipated departure seems to now have lulled the Donald into a confirmed belief that nobody is looking. Either way, fired, or resigning: Mr Tillerson would do much better to preserve his good name now. Otherwise, the damage done to fine men, like Gen Colin Powell, by coddled princes of reflection and self-praise, while public upbraids await most others, might weigh him down with more than simply daily insults to his intelligence....as ReBush did damage to Gen Powell...unforgivable damage.
Jeff Sessions, Attorney General of the United States
The wafting of rumor dragged itself like a stiff curtain through the latticing avenues of the Beltway, recently. And it was a five day period in which all types of supporters for the last president in our history finally saw light at the end of the PizzaGate tunnel. And for the very first time, ever, they extended that support to Mr Sessions. Alas, it was only an illusion, however, as the hours waned and no real legal steps were taken to overpower the scumbags whom ran this nation into the ground with the whips of banking treasonously, and in disloyalty: raping kids the entire time.

Yes, rumors also fade, and with their distance arises the return of the motif in Post Trump Election Overture, which the public just does not yet comprehend, nor the magnitude of the hilarity which guides Donald Trump's Cabinet-bedside manner: "Do what has to be done without telling me. Then, when I find out in the press, I will berate you both publicly, and personally."

But...if they cannot tell him: how else would he know?
Melania, God love her, she has no idea what Mr Sessions would be asking if he asked, "Could ya tiptoe in there, and ask him of we can bug him with the illegalities of bending treaties with the Russians, even though he, "made it look like it was Israel's idea"?"

Not her job. And, timely-enough, the crowds awaiting the hammer of justice to remind the Plutonomy of the defining principles of Equality, which are somehow threatening to tear our country apart, nullify in a consistent and unresolved fashion upon the sloppy engagements of the Obama/Clinton State Department.

Treasonous though they are, the American public will not be satisfied with the slaps on the wrist anyone indicted for them will inevitably receive, and Mr Sessions probably hears already the cries of, "How do they legally engage in sex with kids, though?"

As helpless as he is to fight it, alone, I have always believed that Donald Trump may resemble PizzaGate remarks. And thus, it shall never see the inside of a court room in America...though except for royalty, it finally did, in Europe.

So, observing that Trump's term will only be four years, it is completely understandable why Mr Sessions, or anybody, for that matter, would be interested in a return to serenity.

Though others may be considering the move, but these are the three that I believe sincerely the media believes will depart for whatever it's worth. And though foregone conclusion and all, Homeland Security is in need of a secretary, currently.

Personally, I would prefer to see Nikki Haley, UN Ambassador, go, myself...she was brought in to logroll the prating critiques of what they are calling RINOs, but this is newspeak. What they are, were, and will be, are just bad bureaucrats of COFP, or its varsity wing, the Bilderbergers. And they are all Globalists.

For as long as Trump supports Israel, he must be seen as one, too: in spite of admiration, rhetoric, contempt, wars, and rumors of war.

Email ThisBlogThis!Share to TwitterShare to FacebookShare to Pinterest
Labels: Cabinet hardships for Sec and President, presidency, Shift Changes, US history, Us politics