Wow. I happened to be looking for something else, (non-musical), and noticed a lot of bad advice, precious little good advice, but no correct answers.

Don't be angry for my saying so, but I think "Ticks and Leeches" is almost entirely, from beginning to end, and to the last notes before, during part of, and after the interlude: in 13/16. (The most difficult parts are, anyway.)

Played on the spot to help give an example of the time signature involved, here....

Inevitably there are places 13/16 and 14/16 intersect, and should you think of this as 27/16, you may miss the accent potential that a more grounded analysis might offer.

"This is what you wanted...": posseses an even count at 16, which works as if we blended a 12/16 and accented four more at the end. Thus, drummers can call that 4/4. But due to the insistent renewal of the downbeat, this needs to be reflected in the Time Sig, cut time can be ruled out because it does not function this way. Thus, "This is what you wanted..." has a solution for everyone at 4/8, describing the blend of cut time intensity, and 12/8's triplet potentials in the bottom-end.

There are 7/8 parts, like the slow, grinding riff which immediately precedes the interlude.

If I didn't address your question, leave it in the comments.

Because this isn't easy, but easily gets very complicated, it is best to boil odd times down into their essential elements.

For those of you asking from closed formats, sorry I wasn't around to help, stayed off the internet a long time.

There are two legs (subdivisions is a better word) in all odd times after 5's, (9's could go either way) and in 13, we generally divide one leg into seven counts, and the second leg will be six, or vice versa.

No need to explain the dozen or so places the time changes, but I will give you how I do it for my band: nobody likes me, if, say for instance, I enforce some 11/8 riff on them. And, for ease of transitioning from 11/8 verses to choruses, back to verses, bridges, whatever: I find myself on the losing end of compromise trying to force tight musical turns when they just wish "...man, what difference is it gonna make?"... when it is my job to write out "when 13/8 becomes 4/4 or 7/8", and that is a pain!

But, if the tolerances in the odd time are too tight, and what is being suggested as a compromise is something where the singer and guitarist feel that they need a restoration of "normal abstract" because it is easier for them, compromise can be the hardest thing!

But then, in those places, I have learned not to fight. The cooperation works. And I have regretted NOT compromising more than compromising. Really, I have never regretted compromise, just not doing so. 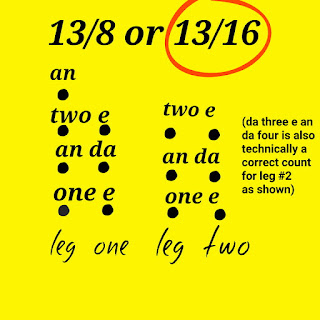 9/4 and 9/8 shall suffer robbery if they are not given respect for their accent potentials unique to each of them.

How Do I Know When I Am Counting A Time Incorrectly?

Cycling is useful because the relationship with the incorrect count, in this case, 4/4, reveals; in the fast and predictable pattern of cycling through the count first at 1 and 2, then, immediately, repeats at 3 and 4: that we are two beats short on the time we are counting.

Identifying that the improper count cycles one beat at a time means a special set of skills will be necessary to remedy this. Because when this kind of count cycles this slowly, it should be indicating a paradigm shift will be in order.

May I recommend Take Five, by Dave Brubek, or Number of the Beast (5/8), the song, not the record, by Iron Maiden? This 5/4 issue is one requiring metaphysical determination.

5/4, 5/8, are essential to all odd time skills in playing the drums. From there, the foundations are established in all odd time signatures.
For 7's (8, 16) think of these as being a measure with four beats, and a second leg with three.
For 9's (9/4, 9/8, 9/16, 9/32, etc) remember: in a slow four four count with nine down beats, a lot of magic can happen distinguishing it from simply being three measures of 3/4, 3/8, or 3/16, etc. Also, 9/8 can be very cool when used to sound like four bars at cut time, with one extra note tacked-onto the end,
The 11's are either one leg of 5/8 or 5/4, and a second leg of 6/?, or vice-versa. They can also have a seven beat four beat effect, or eight, (2 @ 4/4) and one @ 3/4, or changing bottom numbers from 4's, to 8's, 16's, etc...
13's have the two legs, one six the other seven. But, it could be nine, and and four, or vice versa, another trick for defining that you are in 13 and NOT 12/something is that one leg is even, the other odd. If both legs are odd, check for the definite presence of a five count sequence, if you find it, and hear another seven count sequence, it is 12.
Remember: 15/8 is an expression of three 5/8, but Meshuggah, in their Scandinavian evil, often downbeats a slow count of 15/8, and riffs the sixteenth note accents in subdivisions. I heard the Sweetwater Tama snare guy, Nick DiVrigillio, playing a 11/8 riff on YT, same thing, he uses a subdivision on the 5/8 leg at the end, two entirely different genres. The uniting clinch? Both drummers have an almost omniscience in 5/? times, thus the beat follows instincts.
29/16 is a time where you have six sets of four 16th notes, and five more 16th notes tacked on at the end.