The Case Against QAnon

There should be no more doubts: the facts about Qanon are so full of crushing disappointment, that people are clinging on to the larp for dear life still unaware that the reality about the assholes Q is promising justice against is not his reality to pollute: until one keeps on larping with him...

Qanon, and the phony Calm Before The Storm, are exiled permanently to 8chan...

Fact: on November the 6th, 2017, no sealed indictments were filed with the US Fed District Court. In fact, not one sealed indictment has been filed in that institution for the entire year 2017. 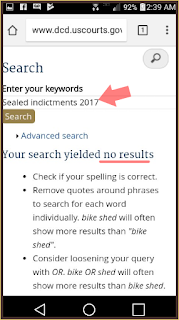 Fact: Robert Meuller's Federal Grand Jury is seated in that jurisdiction. It is the only one in which his investigation can file charges. The 4,000 indictments tale is therefore: nonsense.

Fact: except in extreme circumstances, the name is not absent from a sealed indictment. Each will have the person's name, their case number, and a ton of other numbers indicating the nature of their charges. Once a defendant has been arraigned, the indictment becomes unsealed. Thus: no sealed indictment has been served against Clinton, due to this, and due to the sole court eligible to bring forth indictment simply denying any sealed indictments have been issued by it for the entire year of 2017.

It is a violation of ethics, and US Law, for a person's arrest, indictment, and charges to be kept secret: all indictments are therefore filed in the public domain. Arrest records, also, are public. Though the types of warrants Meuller would file generally are always sealed, a search return would not conceal that such an indictment had been filed. It would literally read, "a sealed document..."
(Below: proof!)
https://www.google.com/url?sa=t&source=web&rct=j&url=https://legalbeagle.com/6292470-can-out-am-under-indictment.html&ved=0ahUKEwjUg-S72d7XAhWKRSYKHemmClgQFggiMAE&usg=AOvVaw3d718jU6os9EAYi5yixO_z

Fact: in the entire 241 years of the United States, not one special prosecutor investigating an administration has ever filed charges outside of the US District Court in Washington, DC. This would be unethical, and far beyond the bounds of Meuller's power. The only one who could've would have been Ken Starr, and this was due to the Whitewater property being in Arkansas. Each of these crimes and charges, which are allegedly already indicted against each of these people, occurred while they were US Federal employees, and therefore can only be charged in the US Dist Court in DC.

Fact: not a single person on earth can pass a polygraph if asked, "Yes or no...did you watch Qanon say, 'confirm in 30 min', and, then, 30 minutes later, did you witness the tweet from Obama going live, both, as those those events happened, in real time?, and that examinee answer, "yes."
The machine will indicate deception.

This has made fools cleave desperately to the pursuit for justice in spite of the fact that not one single prediction he has made happened, and the facts do not end with there being zero sealed indictments in US District Court, in DC, they begin right there.

We all want justice, but this is not the way to go about it. We are being made fools of. We are being accosted by despicable people for knowing pizzagate is real, and for knowing JFK was murdered by Nixon and D Rockerfeller, etc.

Whatever you need to do to save face, do it. Because this is an attempt to make you mad at Trump. And when you finally realize it, who else will you blame? Just be honest. Are Clinton and the Podestas free, today? Think maybe McCain is bating and switching you while they all make fools of people they have betrayed for a living?

And, honestly, is pretend ever real? This is known as The Fallacy of the Infinite Regression, or The Fallacy of the Infinite Regress, or the Humunculus Fallacy. What it states, basically, is that each lie Q tells can only be explained away not by other, outside sources, like Pacer, for instance: instead, the only supportive evidence comes from within the Q nonsense paradigm.
https://www.logicallyfallacious.com/tools/lp/Bo/LogicalFallacies/104/Homunculus-Fallacy

The fact that Q is able to last this long is directly due to its followers not challenging the conclusions from outside of Q's regression. Eg, "...you cannot find the 2,300 sealed indictments, because they are rising so fast....now the number is 14,000! ....now 23,000! Gotta be quicker than that! To date, neither Pacer, nor any Fed US or Defense Atty does anything but laugh at this ridiculous claim of x # of sealed indictments.. And, it is getting worse, all the time.

The only way to stop being a sucker is to confess that you have been tricked. And then, to still have an open mind, having the fortitude to move forward with your life, bearing no grudge against anyone, nor begrudging any hope that one day perhaps some of this will happen.

For a little bit, believe it, or not: I bought it, too. But, no arrests, and the crazy yarn about the Titanic, it all violates the words I live by: once for mercy, twice for sin. When Q lied the second time, the only sin I have in my power is disbelief. It is in your power to return this liar his sin, or keep thinking that the reality we all share has little places of exemption that we might push through the dynamic of; using tools made of weaponized and fanatical belief. 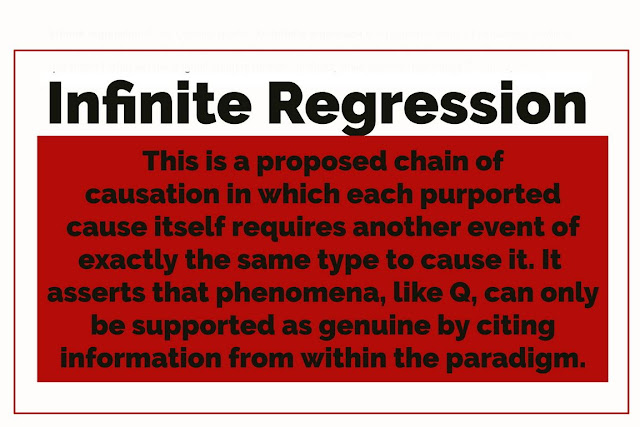 But, then, you would be larping, again. 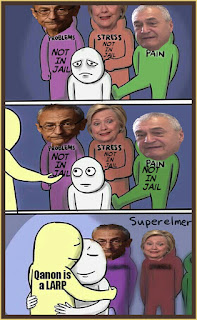 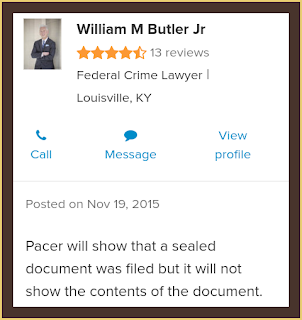 Above: my theories about whom is actually behind this larp 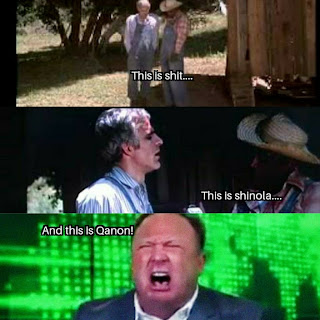 Email ThisBlogThis!Share to TwitterShare to FacebookShare to Pinterest
Labels: The Case Against qanon