Israel and Saudi Arabia are about to start the Third World War... 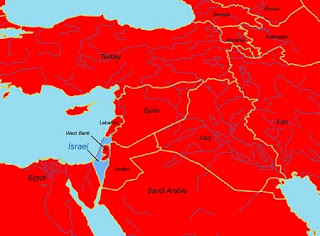 This morning marks the latest attempt by Saudi Arabia to reassert its US backed dominance over the region, after failing in Yemen and Quatar.

Meanwhile, the US Naval 5th Fleet finds itself confronted in the Persian Gulf by a Chinese Fleet strength armada which was prepared already for what this actually is: more Israeli attempts to destroy Syria.

Likely the American fleet of roughly thirty ships will turn its bows south, only to find itself surrounded by not only Chinese naval task forces, but Iranian and Russian joint naval blockading task forces, as well. And they are there just in case Israel decides to continue asserting its right to occupy Golan.

Likely to be confused is Saudi Military Command, under the mistaken presumption that President Trump will help stop this revolution simmering against them which is boiling up into mutiny in Saudi military ranks, already thoroughlly disgusted with actions in Yemen and Qatar which were humbling, and disastrous.

In the event Saudi actions begin to back Israeli actions in support of IS in Syria, then Russia and China shall enact Sinai Initiative, which is a Russian and Chinese plan to eliminate the threats to Syria from Israel, and her allies covertly or overtly. This plan's beginning phase is in effect, which is the reason for the huge Chinese naval presence both in the Gulf, and steaming towards the Gulf of Arabia currently. 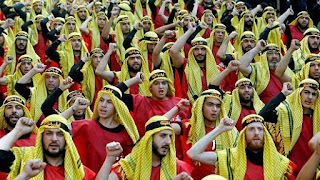 Be not fooled: this is merely more efforts by Israel, NATO, and CIA to escalate a new Syrian war. And the invasion of Sinai shall ensue, from the Arabian peninsula to the Sinai Plain.
https://www.google.com/url?sa=t&source=web&rct=j&url=http://www.tldm.org/news34/iran-and-china-hold-joint-naval-drill-in-persian-gulf.htm&ved=0ahUKEwimhMK5w6zXAhVD0iYKHdz0BJwQFgg7MAM&usg=AOvVaw2mZFc2z1YZfd3Q8sXt42oW
Above, link to Sinai Intitiative being planned well- before now.
http://www.theotherkevin.zone/2017/11/theotherkevin-war-that-comes-are-we.html?m=1
The War That Comes: SA trying this is merely Golan Israel Initiative. SA shall not survive the War That Comes
at November 07, 2017