The everyday economic picture in Europe, and the one we get every month, every year, and closing in on a second decade, is one that is so confusing, and so dimensionally complex, that it is simply extraordinary. But for all the wrong reasons.


The uptake leg in eu trickle down economics functions in defiance to most practical macroeconomic models. It removes labor, the goods which that labor has manufactured, the efforts to transport goods to market, the taxes Europeans pay, and strict control over the disposition towards refugees, their welfare, plus room, board, medical, and educational needs, into a collectivization rivaling Soviet economic aspirations. But all of this, for what has predictably become yet another failed experiment in Marxist models of economics, and in spite of warnings unheeded, and endless compromises by her people.

Unipolar World Theory·n- refers to the equating of the regulation of trade in terms of a nation's power, and the emergence of a single super power drawing all power worldwide into its edifices. (See, Political science fiction, also: the bastardization of an actual expression of a sensible concept of Geopolitical observations.)

Polar World Theory · n- refers to Geopolitics in terms of poles, which are concentrations of economic, military, and political power.

BiPolar World- this is the world of the Cold War, having two superpowers: the US, and the USSR.

MultiPolar World- this describes the post Cold War emergence of many superpowers, and describes them geographically, Pacific Rim, PanEurasia, US, eu, etc.


Unipolar World Theory was the stick, carrot, and donkey approach to eu's designs. The cliff nobody saw, and the reasons that they should have seen it, are what this article attempts to answer...


It was a year ago, nearly, when eu was told, in a letter sent by a group of defiant Spanish economics experts, that its statistics bureau, eurostat, was just plain unreliable, ineffective, and that this was contributing heavily to corruption by the regime in Madrid. (Think "missing money")

And, the fact of the matter is, most regimes of the"decentralised agencies of eu" are lacking somewhat in their abilities to manage effectively the giant convergences now occurring in eu. These agencies' internal designs are perpetually in a state of crisis, overlap, and change.

The fact that new ones spring up, kind of like relatives showing up unannounced, is a testament to what eu has actually become very cunning at doing: designing over-oratory, unaccountable, and opaque internal regimes, then staking them with plenty of the fake money that eu authorizes.

Then, the cash is printed straight into the waiting gullets of a eu central bank, like mother vulture feeding vultures. And it is more of a cash laundering than debt ressetlement. This is how the crime spree of embezzlement and theft, called, "The Panama Papers" was first created. The economics of eu are the equivalent of "opportunity" in criminal acts.

More confusing yet is the constant process of debt assessment, adjustment, and resettlement. That is the trickle down leg of the flow of economics in eu. This, also, defies contemporary market force economics. The trickle down side of the process traditionally isn't taxed by monetary percentages and cultural destruction. This is asking too much, and it is merely the beginning. The failure of the Unipolar World is a little more sinister than the effort to create Marxist economies in the Twentieth Century, and the ultimate failures of that Marxism.

This is due to the implication that whatever was learned from the lessons of failed Marxism having somehow not been prevented in the architecture of the economics of eu. The past was there, but the lessons of it were not a factor in the design of eu, so the past is going to be repeated.

The trickle up leg is every bit the mystery and fascination that its coeval leg is, and this is the one which burdens each European on a daily basis. Most poignantly, the migrancy crisis, and the violence associated with it.

Basically, eu is a meta-bank, meta-state, meta-farm, meta-harvest/meat processing, meta-power, water, and energy provider, and bears its own consolidated court structures. Eu also boasts InfoTech strategies which are top of the line, and state of the art. Not bad, considering the Digital Age was barely entering the Word Processor phase in Europe, in the mid to late 1980's. I once met an IBM exec during a Frankfurt to Atlanta flight in 1984. He said, "Europe has slept past the Digital Revolution..."

Yet, what eu was supposed to be, was a convention of capitalists; conglomerating an episode of financial history whose mere functions would control interest, and stabilize the European landscape by standardizing it.

What has happened, instead, is a season of difficult to define leaks in the system which have created too many mouths to feed, and not enough food to put into them.

But the model was one vitally hinging upon interest rates to both assure it's performance as a meta state, as well as to pay for eu, by staking with cash the functionality of each step of the cash flows, in either direction, along the network. What the architects of eu either didn't know, and/or refused to address, was the emergence of a pyramid scheme, which it has obviously become. This one is no different, except it is far larger, and rather than suckers at the individual level, it requires new land, and new working slaves to produce the goods traded within eu, as well as with other nations. Ultimately, the pyramid will collapse.

This is the terminal disease eating away at the economics of the Unipolar World.

When the economic image emerging out of eu became somewhat stable, a sort of picture of it's gears, and other moving parts, as well as its function and form, became discernible.

This model was then conceived digitally, it was further defined as the state of the art in nation state debt resettlement, and given the name, Target. In essence, Target is the Unipolar World. And this is bad news for eu, because not only is the rest of the world not going along with it, but Target, like the electoral college in the US, works so well, that the facts it reflects are viewed as it being flawed...

When problems arose which indicated that the interest rate realities were not what they seemed to be, the image coined into the redesign was aptly named, Target-2. And, within a very few years, the image, whose template is based on reflecting what actually is happening, and not based on projections which have not tendered disappointments, the debate has run its course as to whether or not the redesign will have to be Target-3.

This brings us to Brexit.

Keeping in mind that it is ideologically Marxist, in the simplest terms, the collectivized Europe has failed for a number of reasons.
Basically, until Brexit, eu citizens operated the beginning and end of all exchanges which fell beneath eu's regulatory umbrella, no matter how small, or large those transactions were.

When Brexit was confirmed, the facts that these financial institutions which tread the border between public, political, and self service ever so lightly, would now be, once again, separated by the necessity of clear economic, military, political, and trade regulations which may determine the soil upon which the chief banking ceo lives upon as drawing the most water, Brexit altered the composition of eu at every level.

Now the laws which permit Target-3 talks to begin, and to continue in the backdrop of the hotly contested Brexit Committee, and the public forum which continues to operate as the stage for the bickering, are in limbo. Along with the need to actually update Target-3, which cannot be addressed legally until UK is escorted to their rightful place in it, which is still being negotiated. So, there is nothing but ambivalence in how eu knows Target-4, the Target-2 without UK, might need to be created right after 3 goes into effect.

Yet the realities of collectivization have not hit the average citizen, yet. Right now, and justly, the average citizen sees the influx of immigrants, as well as the destruction of his national identity as yet another toll to pay upon this extraordinarily expensive and tooth jarring road that eu is, and rightfully resents it. The citizen of eu witnesses effortlessly his part in the economic system of eu. 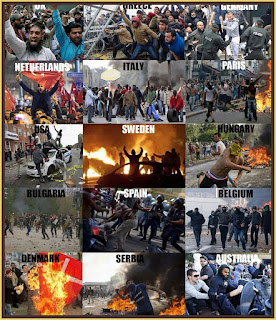 But the realities of eu dictate that the worker, though rhetorically valued in Marxism, in theory, is merely an ant in a colony full of millions of meaningless lives. But, without his labor, the eu grinds to a lethal stop.

Trickling up labor, and engaged in an endless assault upon his identity and cultural values: eu enslaved the whole of Europe in the chains of Orwellian cliche, and even retained the unbelievable pompousness of Big Brother.

To avoid armed insurrection, eu must fall, in order for sovereignty to be restored in former member-states, and so each can legally revoke the votes and citizenship of the only Europeans which matter to eu: the ones still in Africa. Although the ones whom are in Europe matter; they are basically in Europe to disrupt the democratic process. Without them, Europeans would have #euroexited a long time before now.

The Consumer Price Index and The Unipolar World

Right now, due to the union of banking entities and government in eu enjoying a status of legality placing the security of eu, and each of its member-states, themselves, in their entirety, operationally at risk to the forces of market pressures and inflative tendencies resulting from them, the Unipolar World, and eu, itself, for all intent and purposes, is going to remain Target-(2, 3, etc...)

What churns through those linkages and wikinetic data exchanges is the future and vital security of eu.

But Brexit is proof that eu and Europe are not the same thing, that eu and its fractional reserve monetary union are as much virtual reality as as fakenews. And it is this factor which is undermining eu, and not simply Brexit, but this more subtle fallibility, which is part and parcel to all things internet. It is this that is really at the heart that made, and is now, unmaking, eu.