The increased number of seismic events worldwide, as well as within North and Central America, is alarming. It seems to complete a puzzle of rumors of FEMA camps, and mass burial sites, which cover over the internet like a free-static charge.

Earthquakes are seismic events in which the bedrock is shattered, causing the earth, itself, to shift as a result. Tremors describe these movements without the shattering of bedrock having first occurred.

When we look on YouTube, and we see all of the thumbnail pics and references to sinister intentions which may be guiding FEMA (Federal Emergency Management Agency) it can really confirm the old-adage, "A population of sheep will have a government of wolves." -George Washington

But I want to talk to you today about sobering realities. Not any personal theories, or any interpretations of those theories, just pieces of a puzzle which seem to continue as a puzzle merely due to the fact that the insight required to assemble the bigger picture is being dissuaded as a value or a reasonable conclusion.

There isn't a lot of mystery left in the world, anymore. We know how bees fly, for example, and nowadays even scientists know. But for a very long time, they didn't. We have watched few natural obstructions limit our proliferation over stream, seas, hills, and valleys, altering and adapting our concepts of distance and time into manageable blocks of the totally conceivable, when once we could not cross rivers efficiently.

Human beings are actually amazing. You place a male and female in arctic freeze, they not only survive, but eventually they prosper. And the same is true on the other extremes. Humanity is just resilient as hell.

All during our journey, whether Pompeii, or along the banks of the Mississippi, or even the Mexican Gulf Coast, we also have learned to both live with, and accept by a number of differing methods, the unpleasant notion that where we live may include in the package a very high probability of certain death. As if the experiencing of death as a population is somehow more logical than accepting death is for a given individual.

Maybe it is a statement about our warm-blooded gregariousness...I don't know. But we do this. We take short, thrilling risks, while some people are content taking longer, more rewarding risks, while still others wish to experience those inhibitions as they come flying off in a 24-7 format by living in places wherein death is part of the real-estate. 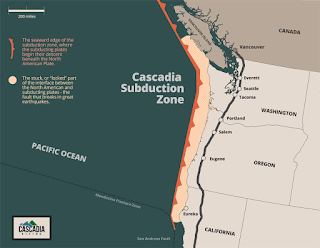 On January, the 26th of 1700 AD, at about 9:00 am, an earthquake shook the entire Northwest area around Oregon, Northern California, and Washington State. That quake, which stemmed from a conjunction of tectonic plates and venerably earth-shaking faults, was believed to have measured 9.5 on the Richter Scale.

It was fairly recently that one of the more popular news agencies listed a repeat of this Pacific Northwest Earthquake as number one of a list of 2017's possibly most dangerous events, after most had placed the inauguration of Donald Trump in the number one spot.

But, on September 18, 2017, at around 9:00 am, a Pacific Ocean buoy began its early warning sequence for just that: a repeat of the mother of all disasters, the Cascadia Subduction Zone quake. Then, for the next three weeks until today, hundreds of earthquakes in North, Central, and South America, as well as Japan, including several in the last twenty four hours, would tend to indicate that this buoy is not only working, but nobody is listening. 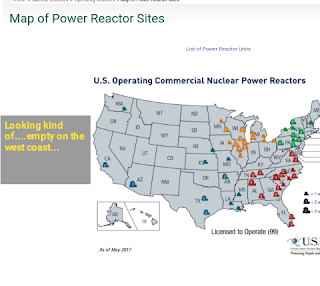 Since 1992 the State of California has closed all except one of its nuclear power facilities. We are talking about a state that lacks the natural resources for hydroelectric power, and is prohibited by law to burn coal, and has not really recovered from the realities and failure of the renewable energy movement in America. But in spite of all this, all except one of that state's nuclear power facilities now sit closed, while the State of California is literally going broke trying to pretend that "we won."

All kidding aside, it appears to me that at some point, in closed-door sessions, FEMA, and its USGS (United States Geological Survey) liaisons were able to convey a word to the wise, and this word went not only to California, but to Oregon, as well.

Oregon is the epicenter of both the expected disaster, and the place where the San Andreas fault connects both into the Cascadia Subduction Zone, and, via underground faults that run underneath Idaho into Wyoming, the Yellowstone Super Volcano. Whatever was said to California went doubly for Oregon, as it has quietly closed nuclear power facilities, tried replacing them in a variety of ways all to moderately limited success, but nobody can dispute the marathon of closings of these facilities over the previous eighteen years.

Washington State remains unaffected, however. Either the dignitaries of Washington were absent, or worse, they were just not invited to this series of meetings. So their plants keep churning away in a zone believed to be safely distant enough from the projected epicenter, that they either don't care, or cannot afford to...

Meanwhile, Kansas had an earthquake, not a mine-quake, but an earthquake. And this occurred three hours before I posted this article, reaching nearly 3.0 on the Richter scale.
And before you say, at least as far as the USGS is concerned, "Mines are not a factor in Kansas unless an actual seismic event occurs simultaneously with a mine-related one."

In other words, no. This isn't the Oklahoma problem, spreading, this is evidence of a deep fault radiating all the way from the Cascadia Subduction Zone, and its underground faults running to Yellowstone, in Wyoming, and reaching all the way to Central Kansas.

These disastrous scenarios are often labeled, "extinction level events", and this is the point where the "management" becomes apathy. And maybe it is wisely so, who knows, but no two seismologists agree on the subtleties of plate tectonics, nor how far underground they may, or may not relate to one another.
There is little accord about the exactitude of what, "how" means.

There is little doubt, nor, disagreement, whatsoever, that the big picture is one of inconceivable devastation, however, and that this picture begins with the Cascadia Subduction Zone earthquake.

Currently, these quakes are nowhere approaching this scale, but consider pixels: the screen is made of thousands of pixels. These pixelated mini-quakes are just the opening act for an event for which the US Gov is both aware, and has been prepping for years. And it could explain these mass graves and FEMA articles which dot the virtual landscape, lately.
It's as if the vibrations of an altered earth are speaking to us, and this is how we are choosing to listen.

The sobering fact is, however, not if, but when it is going to happen, being particularly soon, adds little in the way of advantage. And realizing, like Steve McQueen does, finally, at the end of the movie The Towering Inferno, we can warn all we like: but we can only act for ourselves, and our offspring .

And of all the big pictures that guide us most, that we shall go on moving ahead in some form or fashion, this is the certitude, this is the reality, and this is the rhythm of creation.

Below, link to Cascadia SZ blog entry worthy of looking at
https://www.google.com/url?sa=t&source=web&rct=j&url=http://www.newsprepper.com/major-earthquake-warningus-west-coast-earthquake-warning-cascadia-subduction-zone-surges/&ved=0ahUKEwjI-5jfhOLWAhUGOiYKHYxsAaEQFghsMAw&usg=AOvVaw0dWScGBozqFSFoTwDYdK6V

This links to the USGS Tremor Report, which is a real-time update of every seismic event around the world....worth the click
https://www.google.com/url?sa=t&source=web&rct=j&url=https://earthquake.usgs.gov/earthquakes/map/&ved=0ahUKEwjJ0by2w-LWAhXLJ1AKHR5TAZcQFghCMAI&usg=AOvVaw3GSEmSCyf_cUZ2YlmcqmDd