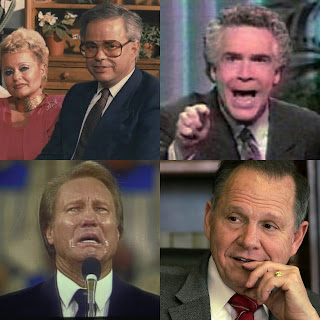 What do you know about Doug Jones? This is actually not about either candidate, but it is about how and why the right to vote is yours, alone, and it is about being honest enough to observe that the con that the Southern Baptist churches are pushing upon its loyal parishioners is absolutely nauseating. But...what do you actually know about Doug Jones?

Do not assume that this specifies a college education: twice Alabama sent monkeys to pick bananas, twice you ate boring corn flakes.

In the previous exercise, the monkey was Mr Roy Moore. The bananas represented the faithful preservation of the American beliefs about church, state, and the way they are born separated in the hands which made our republic. Hands which Mr Moore has neither the privilege, nor the status, to declare that they have demonstrated a weakness, a fallibility, a collapse so profound; that they should now be ignored.

So, let's abandon all reasonable approaches at common sense: and send him on a third mission....to the biggest banana tree on earth! And this is not insane!

When my European friends ask, "What are real Americans like...real Southerners?" I always answer, and this is something a European friend literally just reminded me of, "They are hard to comprehend, like two symbiotic contrasts: but they would fetch your car from a ditch on a icy day, and reel it up out of the mess and help, any way they could, AND.....would not take a cent for the effort. They are salt of the earth people..."

But there is this thing, this....this hard to understand... thing. European people don't see it as such, especially from afar as they draw near: it is a culture spread-out, over wasted ancient forests which more often than wastefully are carved out in distances of twenty five miles, or longer, for only one general store, and Americans do not comprehend this as wasteful, whatsoever. This is almost hilarious to Europeans, for whom space, especially after the unilateral disasters imposed by the meta-state eu, is at a premium.

After all, Americans live in a world without ever having an ancient anything, really, except America, the geography, geology, flora, and fauna. Religion did a lot of division that divided the east and western cultures and civilizations, eastern and western Europe, and ultimately, the Eastern and Western Hemispheres. From the Reformation onward, religious history in America grows from whacky to well, whackier. And sometimes, in the name of God, the awful things people do seem to be relegatable into that type of whacky. Religion is a right, but it is not an order of the state.
From Catholic whacky to Protestant whacky you have roughly 1,547 years. Point A to Point Z.

In the United States, Protestant whacky is point-A. In Europe, it was point-Z, but in the US, it was where the sign said, "Go", and the $200 was collected.

But in America, they were like wild children whom slew their parents with the British and Oliver Cromwell, and then finished the job entirely by slaying a succession of older siblings in North America in concert with, and ultimately against, the siblings whose murderous plans gave way to these plans to begin with.

The killing didn't stop then, nor at the end of the Civil War, nor with the Indigenous Tribes: so they spread their nation out far and wide, needlessly and somewhat less-than-frugally. And then...they found religion....which The Rapture pretty much was invented by first Irish, but then Seventh Day Adventist: thus whacky, American Protestants. There is no whacky like American whacky.

And the role of religion can be extremely difficult for life-long residents to understand. But when, by whatever powers bestow the pastoring class with their authority, and as a unifying voice they declare that it is your Christian duty to vote for Roy Moore, well right there we have what I like to call, American Heresy.

Few sacred values unite Americans, freedom from wont, freedom from fear, detailing and elaborating these exact particular freedoms made Roosevelt's early presidency very inspirational. But it could not have been like that if the Bill of Rights did not provide a foundation from which courage, at least, American courage, might shine a light of hope during the thick red dark of the depression.

Other nations were either still concluding that these rights persisting indicated a stronger and deeper meaning than the whims of rectors, or self-serving epicurean monarchs, whose appetites consumed their people's forbearance, ultimately, or were jockeying wars, and juxtapositions, from whence they might draw upon and replicate the success of this freedom from a state religion's underlying civil-war-less government.

It is this particular one, separation of church and state, being uniquely born in America, firstborn of the Age of Enlightenment, which is on trial in Alabama.

If it goes, the foot is in the doorway for moore, huh? And he is neither going to end, nor to even wound either gay marriage, or homosexuality. But that he misled people that he represented some sort of restorative process that is not real and is never going to be and thus never really was: it means we have grown one tick away from injuring those sacred guidelines in the vital organs of our national body. A self-injury, to boot.

And all for nothing except how easily heresies blended! American heresy blended perfectly, seamlessly with Christian Heresy in a self-styled speaker of The Word of God, because if Alabama awakens from its envenomated stupor: is that not what most of you actually believe? And it is not going to sit well with real God. Just watch. Greek tragedy: just add time, water, oh yeah, and you owe it your vote!

As funny or infuriating as this strikes you, the most fundamental separation vital to our existence is now on trial in an election. Thing is: an election cannot alter that right. So, one of us has been lied to.

But, that separation of church and state is being studied intensely, as the citizens of Alabama have been victimized by self-aggrandizing, as a process, evolving from the fears and disapproval of homosexuality, until the point where voters are being taught a chorus of American heresy whose lessons are going to be those of crashing from great heights, the lessons of thunder stolen from God, and of ignoring or worse: no longer believing in, nor preserving, the processes of democratic rule.

Democracy is not God. It is not a spiritual existence: it has flaws. But it can only be fooled for so long. Were it a good king, yes, justice is dispensed, but in the Middle Ages did we not learn that the good king's son can be every bit the son of a bitch we needed him least to be?

When my friends in Europe ask, "Where should I visit, then?" I say here. Because unless the fluid motion of paranoia and hatred is specifically targeting them, or how they live, then Southerners are salt of the earth.

But the wages of heresy and American heresy are not very different.

We may be in a democratic unity to express Roy Moore far and away from Alabama. Again, this is not a sensible solution.

Oh, party lines being as they are, perhaps an eleventh hour may come to force President Trump's hand. But I do not blame him for that nausea, at all.