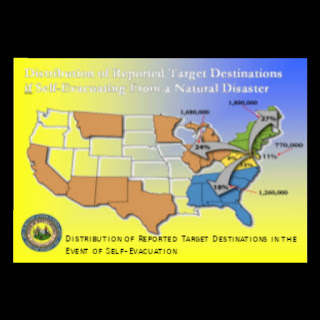 The fact is, the United States is ill-prepared for the consequences of the Cascadia Subduction Zone effect at almost every point of accountability, and at nearly 100% of local, state, and federal authority.


Federal Evacuation is a regime unto itself. It is a mixture of dozens of agencies, and at all three levels of American Government. And, if it is any indication, we seem to suffer universally from a characteristically foolish lack of foresight.

No matter what the cause, not just Cascadia's inevitable horror, but any subsequent logistical one, as far as relief from authorities reaching all the way to Americans-in-distress, or the populations affected either having access-to order, or being able to obtain relief from exposure and hunger, as well as any medical emergencies which might present themselves: all of these orders of assistance are not clearly fleshed-out yet...

The reason I say yet, is that it seems that nothing has been learned from the Hurricane Katrina disaster. And the untold stories of heroes, and the worst demonstrations of humanity, all playing-out while the people whom most of us just naturally presume are going to rescue us, the elements of the military, or the National Guard, simply followed orders, and ignored the victims of Hurricane Katrina, as they begged for assistance below them, prompting universal outrage from a shocked, and frankly, a flinching, United States.

To develop a vague recognition with this topic, I literally downloaded and stored to Drive a number of US Gov pdf files about disaster preparedness, and related topics, and I schilmed them with every bit of the conscientious effort at an open mind that an old guy can produce, and I have to say: the reports themselves are brilliant. Well written, interesting, for government literature, as those things go...

Gotta admit I much prefer the USA pdf's to the overtly pedantically happy-pill scrawl that seem to drive the ethos of eu pdf's, causing this mandatory act of political science to become nearly unbearable. Whenever I have to read those, I sometimes look out of the window and wonder what plumbers are doing....

Overall, I like the reports, I give them, and the huge inter-agency co-operation which compiled them, a well-deserved "B". But, due to the excellent format and consolidation, there is a deadly honest quality shining through the sum of the parts. And let's just say that I hope that they remain reports, and never become movies based on fact: because there is the disaster, and then there is the response. And, in America, the response appears to be, in reality, a disaster all its own.


The facts about Katrina reveal failures which by now are famously well-known: poorly-maintained US Army COE levees, non-functioning emergency services within the city, a bad plan for a general evacuation into the Super Dome, and the list doesn't end there. There were cases of euthanasia, cops committing homicides, and these are some of the highlights punctuating how badly unprepared New Orleans had been for the evacuation, as well as the resulting emergencies.

It stands testament to this hour for how not to handle these things, for everyone involved.

It should not have to be added, "If you choose to learn those lessons...." but, then Puerto Rico taught us that hurricanes are only half the disaster, and the federal and local authorities can do everything right...but an unlikely and unprecedented lesson can still make history. More about that, later.

Evacuation after Katrina was only done by helicopter. Not a single reliable concrete road remained open that lay within New Orleans, nor did the major highways remain open. This left the most poignant participants to be victimized by Katrina, perhaps the most convicted demographic ever to be prosecuted by the surreal and horrific come-to-life, to be the people whose inability to abide evacuation orders was actually due to their great age, illness, poverty, or any combination of the three. For these people, the system's failures are unforgivable.

Otherwise: it remains unacceptable that warnings are sounded, evacuations are ordered, yet people believe their homes are more important than their lives. Brusquely, rudely, perhaps, allow me to say, "perhaps: if it is not a slow, terrorized, parched, painful, nor starving death."

When the government official orders you to evacuate, have a plan, a kit with flashlights and a radio, some pet-type foods and water for pets, don't leave them to die, have basics for your people, and go....this eliminates a huge degree of human suffering from having to happen!

When Hurricane Maria became the latest tour de force to visit the awesome forces of nature upon the Caribbean Sea, the Mayor of San Juan, Puerto Rico, did something for which she shall remain nameless here: she tried, in a very boldly and swiftly assembled conspiracy, to both block federal relief supplies, and then, she tried to twist it into a political defeat for the Trump Administration.

The Mayor of San Juan, Puerto Rico should be in custody. Puerto Rico, in fact, has a rich and shameful tradition of government corruption that some would consider legendary as far as the FBI textbooks are concerned. Oh, this is not about all Puerto Ricans, or even all or most public officials in Puerto Rico...let's just say that in Puerto Rico, there is a fine line between authority and insanity.

The FBI has had a lot of firsthand experience trying to define how fine that line is. Especially when it comes to "how to investigate it, when the very police department you are investigating continues murdering your witnesses".

The federal government has a wealth of knowledge and experience quelling the gangster dreams and nightmare realities of public figures in Puerto Rico. And, she is just another one, whom is apparently in a love/hate relationship with power, and thought it sane to weigh the risk of a prison gang beating her silly on a daily basis, against contributing to the picture of suffering and human tragedy which the forces of nature have visited upon her fellow citizens of the Islands of Puerto Rico, and in the vain attempt at being a cheap political foil, which would have fooled no one, she proved again how dangerous Democrats can be when they believe that nobody is looking.

But these are the types of things for which even the best laid plans of mice and men cannot hope to prepare, and though she was caught, she drew blood.

Had she been able to stifle dissent, she would still be doing so, and she hoped this means we would be blaming Trump. But the real blame would belong to a host of agencies, departments, and organized liaisons, which must be able to now include the lessons of "the unfaithful municipal leader(s)" in their schemes and symphonies. And, they are going to need to to do this quickly.


The Corner of Still and Here

The subtleties of disaster preparedness are due to the wide range of possible sources of an emergency, and the realities of having to employ the identical roads, and highways, or personnel, and to do so correlating each order of governance, local, state, and federal, in response. These each have medical personnel, for example, which may warrant differing agencies' departmental personnel to respond due to their particular discipline, as in a biological event, but all of them, every single one, plan to use highways.

Highways....? I thought? Highways, I read. And the same ones to be used by all involved all at the same time. How do you spell "lack of coordination"?

So, at some point during my reading, I focused solely upon this subject, and imagined this specifically as it would pertain to the Cascadia Subduction Zone event....and in this light: the entire effort....I gotta give it a "F". It is a plan acknowledging, in some cases, like Oregon, that it's emergency officials recognize the potential for earthquakes or landslides to occur, but due to wide range of causes, and evacuations possibly complicating rescue efforts, citizens would prefer to shelter-in-place. Know how I know? Because it is nearly a word for word confession from the State of Oregon that it has no plan...

This is the the exact same thing that certain people thought before Katrina changed their minds, bearing in mind, Oregon made this statement a mere five years later.


And this is the DOT's (Department of Transportation) reality: the roads both into a disaster, and fleeing one, are earmarked for too many simultaneous usages except the big one. But this is the style of management that cannot see beyond the emergency and beyond the upheaval and newly-devastated shape of the countryside, itself, and realize that some human beings are going to emerge. And for their sake, I gotta ask, are there helicopters with the ability to float which are inland, like Chinooks, that could be employed in the search efforts?

The likelihood they will need highways until the Sierra Nevadas is pretty slim...

This is the limit of information, however, available on pdf's, and available on-line. And I cannot help but to think that the reason it isn't available is due to open military secrets, like how the Chinook helicopter cannot actually float, although the initial Army contract specifically mandated that it can....

Then, the remainder is a foggy and unclear picture of established ad-libs, and improvisations, and a picture of a public which is either unaware, or comfortable with the level of effort. And the moral of the emergency preparedness story will always be, "Hindsight is 20/20." 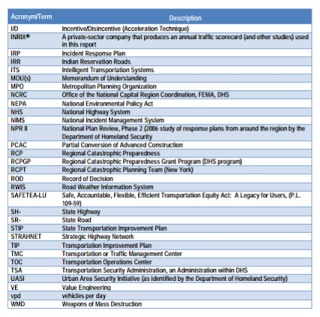 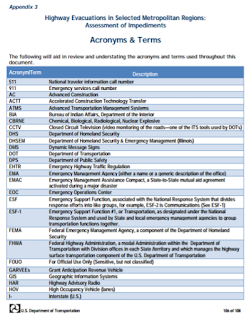 These are some of the agencies, and acronyms, which are commonplace in emergency management.
at October 10, 2017