While The MSM Induced-Coma Put You To Sleep...

While "Joe Sixpack" has been condescended-to by an ever increasingly unbelievable media mainstream, on August 25 of last month, the most paradigm-altering case ever to emerge as a result of the DNC hack, as well as the only attempt to level the playing field and wrest the Democratic party away from the cajoling of confused and oversensitive minorities, as well as the unbelievable Clintons and the capers they have pulled to keep this case under the water, and the best possibility for evolving an air of transparency to this befuddled party's inner workings, was unceremoniously, as well as quietly, dismissed under a very questionable summation from the presiding judge. 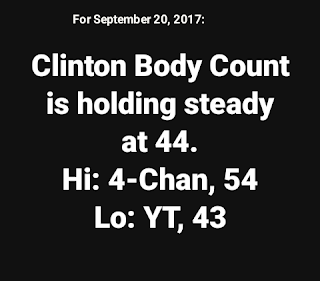 The absolute suppression of this story means more than just embarrassment to be swept underneath the rug for the D elite: it demonstrates a clear conspiracy to silence the entire affair, possibly more involvement, ranging from online companies, to The New York Times, each of whom celebrated the case being tossed-out, but mysteriously, neglected to cover it from any other point as it made its way through filings and motions.

Thus, if one restricted one's self to these media sources, one day, out of the blue, their celebrating of a case alleging very real problems with the DNC suddenly being thrown out was the only clue you had to this having ever occurred. Meanwhile, the Russiahacked case, among a half dozen other disrespectful and despicable insults against the presidency were used to anesthetize Mr Sixpack...

Meanwhile, corpse after corpse turned up. And, upon identifying at least three of them, the connections to how this case was suddenly and unceremoniously thrown out under questionable summation, grow very interesting.

Most noteworthy, Mrs Clinton, and I use that term loosely, waited for this gap in the case to publish her second roll of toilet-novella-bound-for-kindling this Winter, quite aware that between the case's dismissal, and its appeal, that this could be the last gasp of much more than her freedom.

The reason is that the 11th Circuit Court of Appeals in Atlanta has two types of judges on it: the ones whom voted for Trump, and the ones disgusted with the fraud which lies at the heart of the DNC case.

If this appeal, however, is also thrown out, it will clear the way for the SCOTUS (Supreme Court of the United States) to adjudicate it. The SCOTUS, whom would normally send it back down to its lower affiliate court in Atlanta, may find themselves in a hotbox of litagation on one side, versus influence on the other. And, due to special circumstances, sending it to a lower court may be impossible. So, they may have to hear it, themselves.

But throwing it out will not be possible.

This case has legs, and money. D money.

In the Summation of Judge Bloch, he states a common legal reasoning for determining the case has no merit, and it is due to the venue in which the case was filed being without the legal authority to grant remedy should the merits of the complaint be found to be true.

This is not exactly true. And though the journalism majors with the shovels and the looking the other way in the MSM were rejoicing, they neglected to review previous cases, like Roe v Wade, for instance, where, as those cases worked their ways up the ladder, they encountered red-tape fou quite often.

Their celebrating was a bit...let's call it pre-mature. The married attorneys representing the class of plaintiffs, Jared and Elizabeth Beck, are also Democrats, and also shocked by the way Debbie Wasserman Schultz both operated the "super-delegate" initiative, nor could distance herself from the influence of Bill Clinton, whose meddling not only pissed off Congress, in regards to the Lynch scandal, but his presence makes complete the picture of scumbags who lied their way to power, and sold their souls for a bill of goods.

And this ride not only gets worse for them, but the msm's role in obfuscating the entire story becomes another escalator down for their believability ratings. And that is the only kind that they have, anymore.

Note: The Veritas Project, a large effort that does what I do more loudly and probably prettier, announced that it had "the Holy Grail" on fakenews...that it would have msm stars fired very soon! Must be going around.

Below: 32 of the Clinton Victims, Gareth Williams was not their victim. He was murderd in UK for revealing the truth about WMD's in Iraq...this list is from 2016, and several people were still alive, then, that are not, currently, such as Barenton Whisenant.
https://www.google.com/url?sa=t&source=web&rct=j&url=http://mobile.wnd.com/2016/08/clinton-death-list-33-most-intriguing-cases/&ved=0ahUKEwjf7ZzLwbTWAhWB6SYKHeu4AmcQFgglMAE&usg=AFQjCNFaIspyymAEyTGWY86kK5jMHSOTBg

Email ThisBlogThis!Share to TwitterShare to FacebookShare to Pinterest
Labels: appeal filed, conspicuous, Dnc Fraud suit is not over, msm, Of, silence, The, the Clinton Body Count