Man What A Disaster In Layers

The complete idiocy of the citizens of Alabama amazes me, at times. The just absolute absence of sense.

retarded/ french origins/ [ru tar dud] (adj) 1. Slow, late, last to arrive. 2. The belief that a politician's repeated usage of the name of God is a sure sign of a kinship with the same, see Alabama Republicans send Democrat to Congress and are still confused...


Roy Moore is unpredictable, ethics-violating, and in no way a threat to the well-liked, well-spoken former Asst US Attorney Doug Jones, whom he will now, and inexplicably so, face in a Dec 12 election for the vacant Alabama Senate seat, though nobody can quite explain why...

The absolute incredulity of selecting a man merely due to how often he repeats his adoration for God is bad enough, but when the times in which we live indicate the national prejudices held against the citizens of my home state ring true in this man's literally unbelievable rise to this point, I have to point out to the people who claim to want to see Hillary in jail: you can set that date back about a decade. Or two.

There is no way in green hell that Roy Moore can beat Doug Jones, soon to replace a lineage of fine Democratic Senators in an age of just despicable ones at the national level, and there are Republicans, too, but Alabama needed to stop this and nip it in the bud. The attempt to use Roy Moore's creepiness factor via under-stated New England suave most certainly shall be successful.

But if there is a silver-lining in any of this, it will be preparing to resist that effort in Trump's 2020 efforts, knowing Session's seat shall then be held by a Democrat, and it is almost a foregone conclusion that the NWO Pizza Partiers money and influence will initiate Sen Jones, or spit him out.

Either way: we are stuck with him.

But they are celebrating that a sane man lost tonight.

Alabama. Oh, Alabama. God is not in the mouth of he whom repeats His name the loudest and most often, you simple, and lost people!

I hope this mess isn't huge. 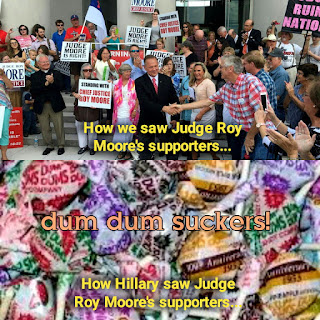