The announcement from Trump and Sec of Defense Mattis of imminent military response to Kim Jong Un's nuclear capabilities come as relief, while those whose near-sighted views of history and highly critical view of Trump urged that a dialogue be opened.

The real question is, what precautions can be taken in order to ensure that China, and then, by treaty, Russia, do not become involved in the conflict?

There are several steps which must be taken to accomplish this. Although they cannot guarantee that no "Yalu River incidents"occur, the United States can take steps to reduce the certitude of just such a repeating of history.

In late 1950, the course of the Korean War, and any hope of victory, vanished forever, as the incident marking the entrance of the Red Chinese Army into the Korean Conflict took the UN/US-led mission by total surprise. 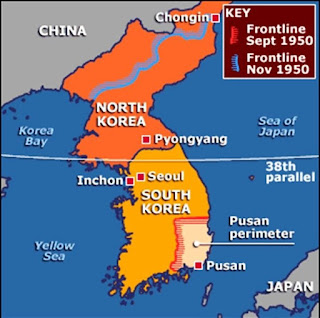 The Fast Pace of Changing Repercussions

Right at the cusp of MacArthur's victory, the Chinese charged over the Yalu River per the request of Stalin. Until that point in the war, the UN/US military mission had reversed months of defeat, failures, and fears of a lost cause which had ended with MacArthur's forces succeeding in an ingenious amphibious assault of the Inchon Peninsula of northwestern Korea. This enabled a US breakout from the tightly encircled Pusan perimeter, which was a small corner of southeastern Korea within which a nearly-beaten and starved UN/US military had retreated. North Korea was entirely under US control, when, during the last week of December, the Chinese forces repelled them all the way back to the 38th parallel, and a change in US policy and presidents brought the Zone of Demarcation, aka DMZ, which divides the two Koreas until now. 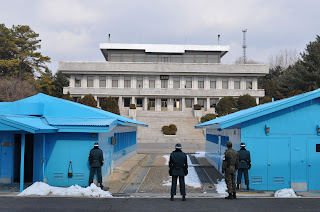 With the recent US track record in Syria, in regards to the Russian military with whom an alliance was both shared, and then betrayed by Trump's actions against the Syrian air forces, it must also be very clear that the actions taken by the US to combat the threat of Un's inexperience, as well as his unpredictability, not draw an impression which the US cannot afford to draw: Russian involvement.

Since the Sino Russian Alliance is in-effect currently, as well as the US reneging on trade deals, and engaging in incompetence through the Bilderberger-Congressional efforts to slap sanctions, as well as tout manufactured justifications for sanctions, both the Russians and Chinese have concluded that whether via Trump, militarily, or Congress: they are damned if they do, damned if they don't.

This adds a degree of snarl which requires swift and tactful diplomacy. Here are the goals which this diplomacy must achieve:

The Chinese are arming North Korea, the Russians, not-so-much. But, the die is cast against the McCain-view of foreign policy, and the refusal of this traitorous congressman to recognize the gravity of the harvest of his treachery, greed, and dis-service to his constituency by reason of engaging a foreign-power's agenda at all levels of the US government's existence has now revealed the reason that Article 2 § 2 clause 2 of the US Constitution exists: because McCain's recklessness in fake homage to Sergei Magnitsky, as disingenuous as it is, as inexplicable as it is, as poorly timed as it is: could now very easily cost this nation our existence.

Failure to secure these steps could engage North Korea's request to China to honor their treaty, then engage Chinese requests that the Russians do the same thing, and the results would make the Yalu River incident look like a Boy Scout Jamboree.

The fact is, Globalism has demonstrated the reason it, its eu, and its illegal tampering in the US legislation is just as bad of an idea as it is illegal: global thermo-nuclear war.

Trump's threats to sanction China for supplying North Korea with missile bodies, technology, etc, are correct. North Korea was connected to China by a railroad which was built, and then subsequently hidden beneath concrete, and earth. The Chinese can deliver anything to Pyongyang, and neither human, satellite, nor camera detect its presence.

Kim Jong Un also possesses biological weapons, a fact unknown to US military planners, making a tactical nuclear strike the only correct procedure. The agents and delivery-systems which Un has most likely would not extend beyond the Korean peninsula, if deployed.

However, nuclear strike would incinerate the threat before it could accomplish its gruesome charge.
at September 05, 2017