The consensus is, "No, we do not." And this pretty much sums up the entire spectrum of the American people, whom are insulted by the US Congress tuning them out and acting on its own against Russia, as though it is a body of kings without constituency. 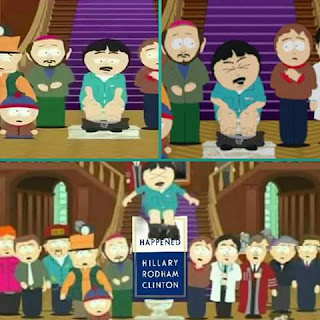 In its prosecuting of Russia, Congress is acting solely on behalf of its Wall Street masters: and this is something that the American public is disgusted with, already.

The pro-Hillary media is somewhat divided over this latest offering from the mother of all excuses. Half wish she would just go away, while the other half are sad, and wish she would just go away...unless we are talking about the aloof and freshly out-of-touch media elite. These guardians of fiction and foot-in-mouth mayhem are busying themselves lately doing the literary equivalent of wrapping James Brown, or the Baby Jesus, (pick your martyr) in coddling clothes...

This week, in more proof of her personal irresponsibility, and yet more shifting of blame for her nauseating effect as a person, and for her party's dirty tricks and cheating exposed, she added Russia to that list. And this is something that she did not need to do. Media believability is already at lows never seen before, and that really hasn't improved, and she, herself, is widely believed to be a liar. So when the media coddles her, it only serves to further polarize the people, and the media that they no longer trust.

Aloof bedfellows like these need not ply a living selling what we are supposed to believe. The media acting in this role is completely pedantic of them. But they just cannot accept that we are able to work forty hours, and are still smarter than they...bummer. The void for an honest media has a line that wraps around the globe waiting to fill it. Hell, people read my blog...if that isn't a sign of the times....

Her referring to Russia as a reason she lost the election only serves the trifecta of completing a picture of distrust for her, relief she lost, as well as validating extreme distrust for both parties in the US Congress.

Hillary Clinton is making the same mistakes as a loser that she made when there was no proof that she was a loser during campaign season: she is hearing only what she wants to hear, then repeating this into a huge electric fan that is bound to blow it back. She is a criminal. She is a child molester. She is a Wall Street Zionist yes man, and she is incompetent, to boot.

Rather than accept this, she simply regroups into a subgroup of yes men, consults them over more detailed questions, (like, "would I have done better if I had ran against Herbert Hoover?") which eliminate her from having to represent any honest response, and then she writes another useless book in the new millennium's equivalent of, "movie: straight to video".

Yet, like clockwork, it slightly occurs to her on the periphery that, yes, this biased subgroup nodded a lot, but that might mean that reality differs substantially...

We all went to school with a girl like this. You know, the one whose spoiled-princess like attitude was as inexplicable as it was undeserved? We have heard this voice twist facts, transpose responsibility, and otherwise free herself from her just desserts too often.

But this persistence is anything but proof she is right: it is proof why Trump won. She is a lying, controversy-coated, Wall Street yes man whose incompetence is one with which the nation is all-too familiar.

And the effort to cover up #PizzaGate, like the effort to blame Russia, has only been successful in demonstrating the massive disconnect between the governed and the liars whom currently disrespect us in Congress. This is not over...The press is falling down, taking Congress with it.

But Hillary, you lost. Shut up, already.