538 Is Only The Tip Of The Iceberg


Below are several links provided by the Department of Defense (DoD) which provide little in the way of details, but they do provide evidence of an unusually high exchange of information, as well as personal visits that must indicate that this monopoly Google enjoys has a DoD "big brother" shielding it from federal inquiry.

538 was the bullet of a very large corporate entity which collectively functioned in the role of a weapon. And, whether it was Google or Facebook, these newly emerging markets receiving federal contract status represent a threat to us all. Whether we are discussing the first, fifth, and other surveillance titles of the Patriot Act, or Unconstitutional acts of surveillance, Google, Facebook, and Amazon appear to be figuring in this, prominently.


And although the world, at large, including enemies of this nation, are taking advantage of these corporate entities for harm intended against citizens of this nation and its allies, the DoD cannot be trusted.

We know this from a long and storied relationship with CIA, drug-dealing, illegal involvements in the wars of Latin America during the 80's: these entities have all been used against the interests of the citizens of the United States, as well as our allies, and innocent people, too. And this terrible usage of the government of the US has injured untold numbers of people, including a potentially staggering number of people whom we do not yet know about, regardless of their "friend or foe" status as defined by the DoD. So, it is only due-responsibility to suspect that these bad habits continue.

During the 1980's the Reagan Administration's extreme defiance of the Boland Amendment circumvented US Law, completely.

(The Boland Act refers to any one of the three acts that Rep Boland, D, Mass. wrote, in which the US Congress tried to limit the US Gov from becoming involved in the wars and crises in Latin America)

This eventually evolved into a series of horrific crimes against humanity. It is clear that aid which was provided to these factions also incriminates this country in the crimes which were committed.

The DoD, and intelligence services, among other US Governmental institutions, aided local militias in committing acts of genocide as a result of their military, financial, and illegal aid to the right-wing militias, whom received the aid under the guise of resisting a series of Communist uprisings in Latin America.

The many examples of the Reagan Administration defying the Boland Amendment represent a unified and singular contempt for the rule of law being demonstrated openly, and with indifferent contempt for American democracy. 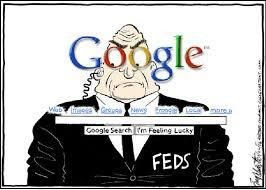 Whether via Edward Snowden or Chelsea Manning, we continue to receive information describing a surveillance-state which defines a relationship of extreme paranoia between the citizens of the United States, and its government. We are also told that these measures defy the limits placed upon them by the Patriot Act.

No matter what the weapon looks like, the 538 bullet is the functional part of the erosion of American Democracy. And the cyber-world represents a volume of threats as of yet undefinable, therefore, indefensible. To ignore Google potentially having a major and active role participating in spying on Americans, as well as playing a passive role by providing the government with information on American customers, would be simply irresponsible.

What we do know is that we, the people, are going to have to recognize that bullet, and inoculate our voting habits to best nullify the net-effect of that bullet:

The entire effect pushed by 538, and the co-conspirators which were involved, failed....this time. Democracy prevailed due to people getting out, and voting. As an AntiGlobalist, I would prefer that either party's non-Globalist candidate would be the one whom wins. And though he has failed in that regard, that would tend to mean Trump.

But, if the suffrage of the voting electorate chose Lieberman in 2020, and the 538/Social Media Entity Conspiracy convinced Lieberman voters that Lieberman will certainly lose, this could cause a huge number of people to not even vote. The only countermeasure for that is to go out, and vote, in spite of this type of effort.

Should this work, and to Trump's benefit, I would be angrily defending democracy.

Note: Millennials, in particular, view Google's authority as absolute. Therefore, Millennials are the most susceptible to the 538-type interference, meaning that as time passes, the 538-effect shall grow more successful.


The US media is not what it appears to be. It is under the control of a foreign and corrupt presence whose agenda is not always the best possible angle for benefiting the citizens of this nation.

Together, the US media started Vietnam via a false-flag event, and this was the very first joint-effort of the US media, and its Bilderberger masters. 50,000 needlessly dead Americans later, the death of JFK, and many repeats of this formula of falsely involving the US military in conflicts whose doctrines defy all reason and military doctrines, this pattern has become SOP. (Standard Operational Procedure)

This means that one should examine all news reports for ulterior motives, in particular, one should thoroughly question the press about motivating factors, such as the ones at work in 2003's re-invasion of Iraq, where the potential to repeat history is obvious. This should incur efforts to resist the media's roles in provoking and promoting conflicts.

Though it has since diluted its acidic role involving the US in ReBush's Iraq, the media, especially the New York media, worked endlessly to suspend logic, silence facts, and otherwise start this war.

Polls and polling firms are a statistical expression. They can express bias easily, as well as potentially reveal themselves to be expressing subjective and purchased views.

The study of statistics bears a fundamental fallacy within its innermost strata: that, by determining an angle of protracted comprehension of an event that already happened, we can presume that it shall happen, again. This, of course, is rubbish.

Literally, the content of 538 determines, that since the last time you flipped a quarter, heads was the result, that the next three times that you flip a quarter, heads must be the result. The compelling identification of historic trends, which were interdependent upon fallacies as defined in the media, also were the source of much of the bombast. For example, 538's Nate Silver made the unsubstantiatable observation that, "The candidate who wins the first debate wins the election."

Trump won that debate. This was the general consensus of every political scientist on the planet. The unbiased ones, anyway.

The msm, however, pushed a desperate assessment of Mrs Clinton's performance, insisting that she not only won, but the media is guilty to this hour of greatly under-reporting the Clinton campaign's cheating which actually has been proven true.

The media reports daily, however, about the non-existent Russiahacked scandal, which has zero proof backing it up, after nearly one year. The media, as well as the Social Media entity having a huge role in the persistent pursuit of this non-event is yet further proof of the media attempting to act on our behalf, and consent to Congress's witchunt about this, as though they are our advocates.

The assertion that she won any of the debates is completely based upon attempts to cajole the American public.

The huge disparity between Gallup and 538 figures were more obvious then, than at any other point in the campaign season. The powerful effect in the number pushed upon the public by 538 the next day, 83% chance of Clinton victory, is so flawed that I don't know where to begin expressing the problems with it.

It is in the interest of protecting our system that this petition, requesting strongly an inquiry into 538 be launched by the appropriate Congressional authorities, the FTC, and others, exists. It is entitled, "Investigate538", and seeks to interrupt the conspiracy against the will of the voting public by 538 and the msm, as well as the Social Media Industrial Entity.


Links To Google's Increasing Role in the DoD