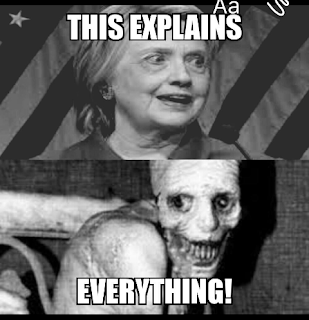 No new evidence, the same lies, liars, and the same word we are supposed to take...the same people caught mocking Trump for a year now about Obama wiretapping him, that just the day before yesterday, got their tongues caught in the grinders, and the same appointees telling the same excuses, only now, they are trying to cajole the states to accept this...which they are not.

When so much slander, so much libel, and so much nebulous falsehood has been used to harm the public, here are four reasons NOT to believe the story that broke late Friday, Sept 22, conveniently after closing time, claiming that Wisconsin officials had discovered Russians had scanned 21 state's electorate systems. This is not real.

1. The obvious failures and anti climax of the Meuller probe are weighing heavily, and this has all of the libelous sting of an eleventh hour attempt at stewing a weekend for hidden doubts we may have....only trouble is: only the democrats relate to hidden doubts. Nobody hacked the election. 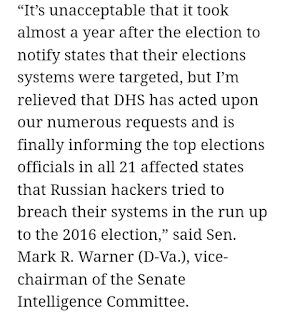 The unacceptable part is that this is all a scam. It is going to nose-dive in the news cycle, and vanish completely. It is a tragedy that the US Gov, which has lied continuously to us, from the killing Kennedy, to the starting Vietnam, is going to have the audacity to keep pushing this one, with zero details, zero remedies, zero evidence, and after too many of these people have been fired or resigned for lying, already. Hello! She lost! This is really sad for the United States. Unless these scumbags are stopped, I think God should cease the Time He gave, and judge the deluded where they stand, at this hour.

Btw: the current house intel chmn is not a co chmn. Chaffetz, who was chmn, resigned over these types of lies launched at Mike Flynn. That, too, had "improper alphabet agency citation." and, that, too, failed to pass the smell test. Just like this...


2. It follows on the heels of Hillary's attempts to, in her own special way, announce that she would protest the election result. Not only is she ignoring her own cheating scandal she got caught in, the much-heralded Brazille case, but this is horse is dead. The American people are simultaneously not listening, and watching the msm lose believability points to even newer lows. 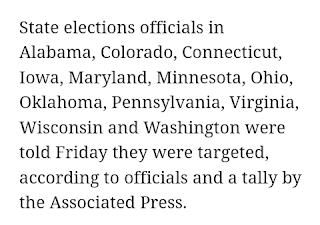 If you were to tell the State of Alabama. or the Jefferson County Registrar that he was hackable, three hours later, and if you could still walk, you would never be stupid enough to set foot back in the state of Alabama. His, like all of these systems, is a closed circuit system, requiring more than his access to certify the vote: it requires the Lt Governor. This is further evidence of fakenews.


3. There is too much confusion as to whom announced what. The headline claims Wisconsin officials, discovered Russian hacks, almost one year later! This, in an apparent preparatory effort to recount the ballots there....again! And to try and pass the blame when she loses, the third time! However, this would be illegal. Just what, exactly, does scan, entail? Because I scanned the neighbor's door a moment ago, and nobody did ANYTHING illegal, nor untoward. But the colorful fakenews power vocabulary is one with which we are all too familiar with, lately. 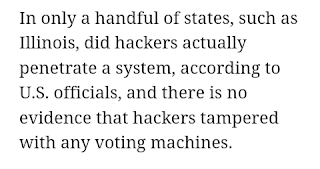 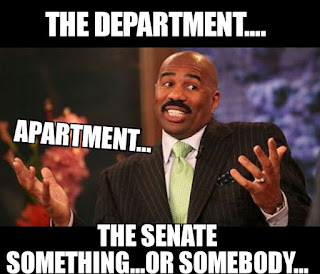 4. The quoting of Homeland Security is inaccurate: the DHS has zero authority over voting issues. If this story were valid, the DOJ and the FEC would be the go to agencies. The FBI, and not Homeland Security, is the agency responsible for the security of our vital national intelligence infrastructures, such as protecting us from spies, and hackers, which it does in congress with NSA, and the Treasury Dept. This is fiction to feed the people Hillary thinks are stupid. 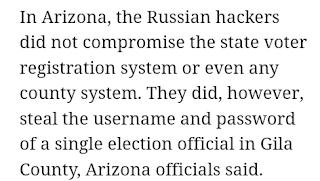 The war that these idiots want we cannot win...but the crimes they are perpetrating are very much prosecutable. This has every ring of bullshit, "hackers got the password of one official's _______?" The "Russians" stole the password to WHAT? Exactly? I don't want to go too far out on a limb here, but I'm presuming it wasn't their password to their secret fort from when they were four years old?

Not only is it left undefined just what it is, the password TO, in a perfectly unchargeable-as-slander way (how convenient) but it's like they sat there, and thought, "if we say, 'two people', we'd be stuck having to provide digital trace of the entire affair...but one password couldn't hurt an election's outcome...Yeah, so...let's say that!
I CALL BULLSHIT! I ALSO CALL THE MEULLER PROBE HAS NOSEDIVED, AND THIS IS PROOF!!!


Forging the results of an investigation, or claiming that results exist although no investigation, no evidence, no chain-of-custody, and no tangible outcome can be shown on demand, except rhetoric, is still illegal. It is also the newfound American dishonor that is acting like a clock on the wall.

And I know the registrar of Jeff Co, Alabama has publicly declared that this is impossible! I bet he is chewing nails at this BS! And he knows Jeff Sessions....so, we shall see how long this bullshit stands up to wiretaps and money tracing back to Clinton...not very long is my guess...


What this represents is the political equivalent of voodoo mixed with psychobabble, as an attempt is made to lower the bar of standards, yet again, to define just exactly what a hack is....with hack downgraded to tamper downgraded to interfere downgraded to scan...and it is all bullshit. Every last bit.

This is how desperate this little murderous bitch, and her mentally ill followers are.

Again, the number of closed circuit voting precincts in this nation is so large, nobody knows what it is. Don't be a sucker.

There is no official named whose quote matches the headline. The story is false, just like Trump rejoins Paris Accords, or PizzaGate isn't real. The wise man is taking extreme pleasure in the repeated deaths of Hillary Clinton, and her incompetent, spoiled bitch career.

Instead of picking up and answering their phones Monday morning, the Wisconsin Board of Registrars, whom were not even given so much as a warning that they would be lied about, and insinuated into this mess, shall take their phones off of the hook, and gather for an early Monday meeting to try to decide how best to handle this lie, and how their state's name was thrown in. Maybe then the Democrats that still believe these swine will have heard her cry wolf once too often. 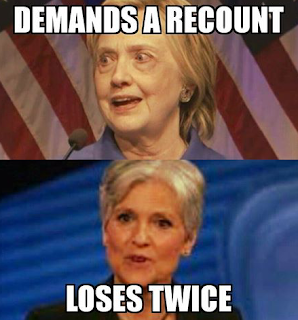