Untangling The Snarl: An Introduction to the Realities of The Patriot Act


There are many Titles under an almost endless procession of Congressional Acts, and, in contrast, there is a basic Code of Federal Regulations (CFR) which may or may not apply. There are fifty of these, known as titles.

During the frenetic and astonishing weeks and months that followed 9-11, the US Congress gave ReBush one of the blankest checks ever given to any US president in modern history: The Patriot Act, and the Homeland Security Act.

The ICE agency, (Immigration and Customs Enforcement) is responsible for undocumented workers...but so is The Dept of Homeland Security, and the BPA...
The SS was a division of the Nazi party, and the Gestappo was the German Federal Police.

The Entitlements under the Patriot Act, and the Homeland Sec Act, and the flurry of ReBush Executive Orders, are to the Five Eyes style of quiet, Globalist-aimed military dictatorship, what the Nat Sec Act of 1947 was to the creation of the Cold War security state. The facts are in on the Patriot Act, and a huge portion represents Nazi-regime like overlapping and confusing jurisdictional problems which are what happens every single time when money is thrown like a trust/windfall into the needy hands of any given presidential attempt to manifest what he may consider to have been a good idea. 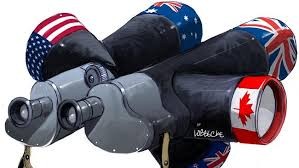 There is a long list of failures that happened when throwing money at a problem didn't quite work. Obamacare, with its total lack of consult with actual trench level physicians represents merely a near-failure. The lack of realistic regulatory concern addressing the largest percentage of medical practice strategies, that of rural medicine, would've created a deadly bureaucratic snarl to accompany the very real potential to do great harm.

Title 4 of the Patriot Act is the "Border Protection Title". Among other things, the unparalelled right to detain any person deemed "under an alien (foreign) influence", and that he or she can be detained without any Constitutional guarantees whatsoever", is a new level of abuse waiting to happen.

The reason I mention this, is Trump is an idiot, but he is our last defence against Globalism. The consequences of his failure to recognize and put into proper-perspective that Israel is the source of Globalism will eventually sandwich him, and his presidency, between a rock and a hard place at very high speeds. But these Titles of the Patriot Act of 2001, and the Homeland Security Act of 2002, award almost unlimited powers with almost no accountabilities to every US Gov Department and to each office, like The Dept of Homeland Security, or the Office of the Director of National Intelligence, that this view of power, and Congressional consent, created.

Title 4 represents Nazi-type of problems waiting to happen. There is just too much overlap, and lack of accountability hides inside overlap. What happens is inevitably there are jurisdictional deference problems, as well as the resulting deprivation of the rights of a person which are created by the Patriot Act, the Homeland Security Act, and the series of presidential orders which ReBush initiated.

The resulting consequence, and the unchecked abuse of power, lies there for the taking; although this was completely predictable. And in spite of the ambiguous language engaged to present an illusion to the contrary, these acts have had a huge impact and conflict with Bill of Rights assurances.
But that train left the station a long time before now, and the inevitable abuse of these powers must incur accountability for their abuses now.

The ODNI (Office of the Director of National Intelligence), for example, acted in the best interests of Jeb Bush and Hillary Clinton by first lying about Russian interference and claiming seventeen intelligence agencies had proof of this interference, and then recently diluting that lie to say that FBI, CIA, and NSA had proof. The "proof" conveniently released to WikiLeaks, leaked NSA documents, were reviewed, and their content disputed by WikiLeaks founder, Julian Assange.

Former FBI Director Comey's testimony before the House Intel Committee refuted the claims of the ODNI, and this denial of the FBI Director as to his agency's having any proof would later dismiss the slanderous charges against Mike Flynn pursued doggedly by fakenews, and lying piece of shit Maryland Congressional Representative, Eli Cummings. (D-Maryland)

Now, you may think that they are different, but Jeb Bush, and Hillary Clinton are not different: they are Globalist scum. The president is neither a Bilderberger, nor a member of the Council On Foreign Relations. James Clapper is a Globalist, and a card-carrying member of COFR, just like the beneficiaries of his deceit. Acting in their best interests, however, violates the tenents of his job. Also, acting in their best interests to slander the victory by President Donald Trump violates even the Patriot Act which created the ODNI.

The Russiahacked slander was created by ODNI as a favor primarily to the ReBush Globalist Republicans, but it definitely was announced and loquaciously annunciated by Bill Clinton, keen to capitalize on the ODNI's twelve year existence's habit of helping ReBush's cronies break the laws of this nation, condemn us to foreign wars which are killing our people for diabolical reasons, and a Bilderberger controlled media which operated since 1953 with impunity for the citizens of this world and in this nation, we are just now catching on to the deception. But most importantly, and without consequences, the ODNI broke the law. 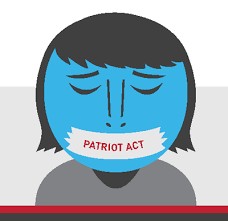 The Other Nine Titles of the Patriot Act:

The realities are that in the future, political scientists will be able to comprehend, with little effort, the huge degree of turmoil during the ReBush White House. How? Simple!

We judge presidencies upon several points, one of which is "how much of his legislation which he sent to Congress was passed?"

From 2001-2007, there are times when this idiot enjoyed the highest percentiles ever experienced by a US president, sometimes assessed as 80% to the low ninety percentiles: these are numbers never seen before. And they represent such monumentally bad ideas as The Dept Of Homeland Security, and the awarding of new orders of magnitude to empower FEMA, and this is just the beginning.

In contrast to this high degree of legislation, the preceding and subsequent very low approval ratings, particularly during the emergence of the fact they lied about the Case for War, and during the pardon of convicted felon Scooter Libby, Bush's ratings plummeted below the low water mark to unbefore seen lows of 15%. Only Nixon would be lower.

This relates a wealth of information to political science! Mostly, something terrible happened to a horrible president, a criminal administration, and to the country. We would know this without knowing of 9-11!

In each area the country has suffered a Globalist disease which we must beat in order for Democracy to survive. That Democracy is teetering on the brink was true following the Rockefeller- sponsored murder of JFK. Our nation is in trouble.

In this blog I will publish all ten of the Patriot Act articles, clarify them, and explain any remedy, if indeed, any potentially exists.

Email ThisBlogThis!Share to TwitterShare to FacebookShare to Pinterest
Labels: and the Homeland Security Act, Govt Patriot Act Entitlements, James Clapper should be in jail, Short breakdown of Title 4, The Imminent Danger Democracy faces due to the Patriot Act