The Fifth, Sixth, and Seventh Titles of the Patriot Act do not actually raise any new red flags, except for possibly the case of Title 5, in which one of the sections gives permission to the Attorney General of the United States to both offer a reward for actionable information regarding terrorists, and acts of terror, as well as declares that the Attorney General neither has to keep his word, and shall be protected from any litigation forcing him to make good on that promise, or accusing he, and/or the US government of fraud.

The spirit that drove the bipartisanship of this act's intricacies, redundancies, and repetitive assertions obviously was cautious of party-platforms of the future which may seek to unwind the Patriot Act, and reduce it even more than it has been reduced since its October 23, 2001 passage date. In spite of this, this is the first of two major shifts (Pat Act and Homeland Sec Act) in US policy as issued by the President, and Congress, which both were successful, and destined to become part of the estimated 82% successful legislation rate which will be attributed to ReBush, as well as his low-approval ratings, which at times fell as low as 25% (Gallup).

The marathon sessions of committees, sub-committees, and joint committees of the US Congress which met, and hashed-out the finer details of the Patriot Act, both prior to and after its passage, account for at least some of the act's recurring themes and redundancies. For example, Title One covered a fund which is to be made available to areas of the the country affected in the event of a terrorism emergency, and made mention of the detention of suspected individuals being held without any Constitutional privileges.

Whereas, in Title Four, the further provisional statutes for the denial of individual rights are clarified, although the issue had already been previously addressed.


The Title One Effect: Funding Clarification, the theme echoing throughout the Patriot Act


Title Five § 501 repeats the assertion that funding shall be made available to the various cabinet departments, etc, as previously touched upon by Title One funding provisions, that this funding shall be made available for the sole purpose of combating terrorism. In this case, the recipient will be the Attorney General of the United States. These sections also cover the Attorney General's, as well as the US government's, freedom from liability for refusing to honor the agreement to pay informants for information. 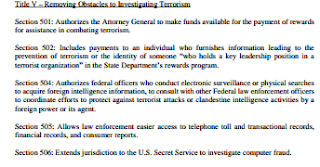 In Title Five, § 502, the Congress, acting on the legislation sent to them from George ReBush, almost unchanged, defines § 501's fund as being created and used specifically to pay informants, as the reason for the creation of another counter-terrorism fund.

Title Six is also a funding provision, this time aimed specifically to assist safety officers, their families, and the surviving families of safety officers whom may be injured or slain directly due to acts of terrorism.

This title's momentum, as well as Title Six's very legally prudent wording, was due, in no small, part to the stories of NYC fire safety officials, and such heart wrenching tales of the last wave of fire fighters standing atop the rubble of the Twin Tower complex, while the sound of their fellow fire fighters' movement indicators, a high pitch chirping sound which activates automatically whenever a fire fighter stops moving, was going off to the count of scores of dead or trapped and immobile fire fighters, whom could not be assisted.

This was a profound and determining image that seemed to punctuate the tragedy with even more tragedy, as well as eventually came to raise issues never before having really been confronted by the American public.
Issues like the fact the CEO of Red Cross draws a salary. For some unknown reason, Americans didn't think it was right that the employees of a charitable organization were paid, and that the pay was comparable to a private corporation of that much worldwide reach...but they do not complain when their pastors get paid. Odd, I know.

The result was a crisis of immediacy, the need to disburse emergency funding to the families of the victims both municipal employees, as well as the tower victims, all while the public resentment for the CEO of the American Red Cross, Dr Bernadine Healy, MD, was becoming uglier as it played out in daily updates in the press. Thus, while fielding daily hostilities for her wage, Dr Healy was also observing a sharp decline in donations, at a time when that organization needed them most.

This resulted in a war in the press between assholes at Fox News, as well as an employee from the NY State Attorney's Office, and finally she was among the last people blamed for the attacks when she was fired in early October, 2001.

This did, however, seem to usher-in a restoration of much-needed cash donation streams, and in coming months, the cases of fraud, denial of legitimate claims, and confusion about the hastily assembled payment dispersals finally helped to usher victim recompensation into the Patriot Act as a more clarified, more organized, and a completely Federal process.

The Title 2 Effect: Disintegration of Freedoms? Or, Prevention of Terrorism?

Immediately following the September 11 attacks, a media provider sponsored a poll asking the daunting question, "Would you be favorable to surrendering some of your basic rights in exchange for preventing acts like the September 11 Attacks?"

Title Five, §§ 504, 505, and 506 deal with the furtherance of Title Two-type electronic surveillance gathering, and Title Four type detention of suspected individual issues, in absolute-terms, as far as the Constitutional protections being withheld by the US Congress. And this would be later supported by the Supreme Court's tacit approval, via either never having these issues before them, due to that very denial of rights, or just sending cases in these dogmas to lower courts. And Title Five § 503 calls for the gathering of suspected terrorists DNA for the purposes of identification, and evidentiary usages that may apply, again, no warrants required.

The distinguishing factors between the Titles One, Two, and Title Five's provisions, are that in Title One, we deal with solely Federal law enforcement agencies being ordered to update electronic surveillance systems, and particularly, these orders to the FBI and the Secret Service in Title One, which are expanded to NSA in Title Two.

But in Title Five we see the charges which potentially relieve ordinary citizens of their Constitutional rights move from federal law enforcement agencies, to that of state and local jurisdictions, as well as addressing, in a degree of brevity, that funding will simply be made available for this pursuit. The authors of the act touch upon this daunting issue of funding support with Title Seven, but never in clear terms.

Now later, in 2004's Homeland Security Act, these entitlements are very clearly focused upon actual issues as to how, whom, and what monies?, but in the six weeks since the 9-11 attacks, the urgency to feel as though progress was being made was of a greater importance than that progress actually being functional.

But, in §§ 504, 505, and 506, we see for the first time, ever, The Congress of the United States order local law enforcement officials to gather intelligence evidence against terrorism suspects without regard for warrants, probable cause, and to detain them without due process. This is still unresolved as differing jurisdictions have attempted since this bill's passage, to employ the Patriot Act in pursuit of drug suspects, and this was a trend.

The involvement of local and state officials in an order from Congress, and a charge, from the White House, to toss-out Constitutional protections had mixed reviews, and would suffer a nearly 100% failure rate when employed to surveille, arrest, and deprive drug suspects of their Constitutional rights, with law enforcement citing the provisions of the Patriot Act as precedent. The issue was bound to get that far, however, and served to bind drug dealers to their patriotic duties as withstanding these attempts. This also serves to further define the permanent changes in ordinary citizens' relationships with their government which were caused by the September 11th Attacks, and how those changes have altered our nation's composition.

In Title Seven of the US Patriot Act, there is only one section. Were it not so, I would limit these breakdowns to two titles, in order to clarify the ensuing results of these acts, their causes, and their similarities. But Title Seven sets aside, for the year of 2003, a one hundred fifty million dollar fund to be granted to local law enforcement specifically, in order to assist with their compliance with the first six titles of the Patriot Act. This reason continues to figure prominently as the reason for state and local law enforcement communities' loyalty to Republican candidates.

The United States Patriot Act passed the House 367-66. And of the yea vote of 367, almost all of the Republicans, and a huge majority of House Democrats voted for the bill's passage. Of the 66 nay voters, only three were Republicans, and 63 were Democrats.
The Senate breakdown is pictured below... 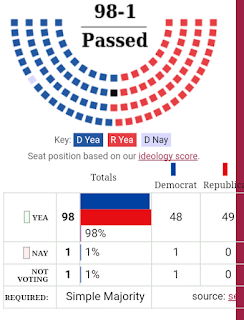 It may be slowly clarifying that, at least on a national level, some of the Patriot Act's methodologies are actually outdated, and in need of a less-traumatized Congress to establish more sensibilities per our times in most of this act.

Another issue was faced by incumbents whom perhaps may have had problems with the act, but may have feared the implications of losing their seats more, come election year, when their respective opponents accuse them of not having supported the act.

Like politics, and its legendary short-term memory, the first and frightening decade of this millennium has passed, and perhaps some of these issues need to be addressed in order to reestablish the role of Civil Rights.