The Last Crack: Who Are The Visegrad Five, Six, Seven...?

If you are a habitual reader of this blog, then you are already familiar with the Austrian break against eu due to eu stealing TTIP and CETA from Austrian bankers, whom then turned, and began a very loud objection to eu. And I told you that, "This could be it for eu in Vienna." 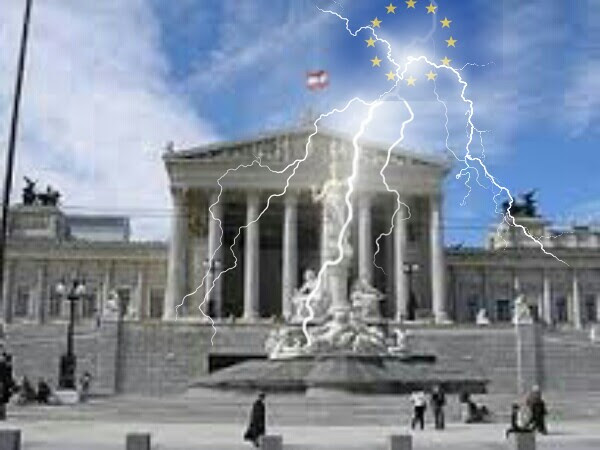 Today, Austria, once the lead member of the Austro-Hungarian Empire, has reissued that alliance under a general refusal to comply with Brussels, and Austria sent troops to militarize its borders with Italy.

Italians are rioting in Rome. They are protesting the move by Austria to defend her borders. -Reuters, Huff Post
This has been retracted by the news services completely. Huff Post deleted their story, and Reuters is claiming that an editor made a mistake and assumed that the journalist's comment, "Rome Protests", was somehow a reference to CasaPound's huge anti-eu following, including myself. In case you were wondering, I accept that it was an honest mistake.

CasaPound is protesting the destruction of Italy as brought about by eu. We want out of eu. We want all foreigners to achieve a legal status under the old visa program. We want no more refugees. Therefore, we want no more eu. -CasaPound (the people rioting in Rome)

Ttip: the trade agreement created by Austrian bankers for the placement of Austrian firms of manufacture, and trade, upon US soil. TTIP (TransAtlantic Trade And Partnership) which was already signed, was only with US. It was ruined when US pres Obama withdrew voluntarily as the conflict with Vienna and Brussels grew abundantly clear.
CETA, the Canadian version, also Austrian, also for Austrian businesses, hijacked by Brussels. (Comprehensive Economic Trade Agreement)

The Austro-Hungarian Empire saved Christianity more than once. And the partnership with the V-4 Group was entirely avoidable for eu.

But, in truly inconceivable hubris, eu has refused to preserve itself by reforming its ridiculous, and Communist beliefs about the constants in the human condition. This type of failure is due to the way the allies designed the post Second World War German government, causing it to be top-heavy with an emphasis on too much debate, and very little ability to address change via a complicated process.

The allies reasoning for this was that Hilter, and the Nazi party, were able to do the things that the Third Reich did due to one party having all the power. Thus, when Germany designed eu, this dna transferred with it.

But when Frau Angele Merkel became Chancellor, her effect over eu has been mind-boggling assumptions about race, class, and the human condition, in-general.

It only seems predictable in every way that her Communist-controlled early youth environment would, in fact, program her beliefs about allowing the murder cult of Islam, and the criminal population of Africa into Europe without checks.

We are witnessing her fall from power.

But this still remains unfair for Italy, which has unfairly borne the cycle of eu policies, the eu courts' ridiculous rulings, the incapability of Brussels to institute the types of reforms necessary to save itself, and the price of the arrogant superimposing a l'a Communism, of intellectual concepts of humanity upon those who think you are an easy victim for having done so.

Merkel has engaged in this malfeasance, while Juncker stole the TTIP and CETA from Viennese bankers, and voila: those bankers have summoned Euroscepticism like Godzilla, from the deep.

It remains sad how the press is constantly trying to conceal Bilderger control, but then lies, exaggerates, and views one side of the refugee crisis in a futile attempt to free its architects from the accusations of senselessness which they truly deserve. There are many lies told in eu, and nations prospecting membership, I remember one, in particular: a buddy of mine messaged me and told me read the headlines for his nation, which, at the time, was seeking membership.

The headlines, which read, "Migrants and refugees treated to bus ride and warm quarters for the Winter, show up to support (the leader's name)."

The reason it was funny is that he was there, and what was on each of these buses was about 130 campaign workers, and not one refugee. This is the lying and slandering press there....which failed to arrive here due to the refugees not being allowed to come here.

These stories often try to evoke humanitarian, vegetarian, and ignorant emotional responses from their readers. And these same media outlets do this while relating what are arguably falsified stories about individual refugees, whom were doctors, or engineers, whom somehow are fleeing a war.

The reality is, these are criminals, lazy people, whom almost, to the last man, worship the murderers in the Koran, and will engage bullets, crime, and the welfare system, which deprives the people who are European, speak the language of the nation of their birth, and resent this imposition.

Huff Post, Reuters, all are trying to make the CasaPound, anti eu protests in Rome, twisted to become anti Austrian and V4 riots...when it blows up in their faces, which it will, then the public shall forgive the liars, just like always. Although the Reuters and Huffington Post stories have been edited and changed respectively, this fake news has been a daily component constituting the cynicism and disgust faced everyday by Europeans who are sick of eu. Don't let these alterations fool you, were it not for fakenews like Russiahacked getting folks fired, lately, both of these Globalist media outlets would've dared us to complain...

Do me a favor? Find Casa Pound on FB, message them. Ask them, yourself, why they are protesting? Then fakenews will be positively proven to exist on the behalf of Zionism, Israel, Globalism, and utter human shame.

Italexit: now.
No matter how I submit, I submit Globalism must be destroyed.
at July 04, 2017