Terminally Ill: How Both Parties Failed The American People

The healthcare bills from either party are nearly indistinguishable. The absolute differences are actually very hard to find. Trump's inability to form a consensus with Senate Republicans should not actually raise eyebrows, though. Repealing Obamacare is the goal. The failure to reach consensus to pass Trumpcare was written into that plan's dna. The Republican party must agree, in enough of a definite number, as to repeal Obamacare, and this is what actually needs to happen... 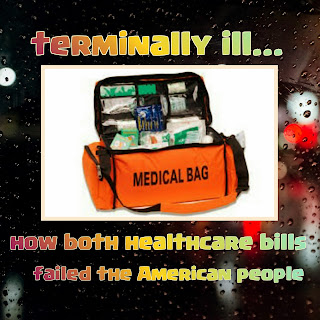 Leaving the demographic of people actually benefiting from Obamacare ostensably without health coverage, those whom dwell in municipal urban areas, really does not raise immediate concerns, due to systems that were already treating the young, sick, and the elderly before Obamacare started its ridiculous weights and ropes of penalizing the very people it was supposed to help. This mandating was also a part of Trump's bill, as was his personal swift assault at Obamacare by replacing it, when repealing it would probably be enough.

People in inner cities prefer Obamacare by a slim majority. The resulting trek to the inflating role of hospitals, as imagined by Obamacare, and now Trumpcare, mandate a shorter trek to the necessary elements of diagnostics for those living in the inner city than those living greater than thirty miles from the nearest level one hospitals...

The latest R defections over Trump's healthcare bill will tank it, for now. Sen Mike Lee, Utah, and Sen Jerry Moran, of Kansas, are not withdrawing their support due to a war within the party. These defections are due to an inability to distinguish between the two polar opposite presidents, and their nearly identical plans.

Trump entered the White House in January, and began marathon sessions of executive orders, and the like, in which he sought to undo what he viewed as, "the damaging influence which remains after thirty years of just bad leadership." In his haste, the Obamacare-issue seemed to be simply an afterthought, and remains as a barometer for how ill-prepared his team had been for Trump to win the election.

It became abundantly clear, however, that he simply did not have an alternative plan that was, in at least the designing stage, prior to January 20, 2017, when he was sworn-in. The clear majority of Americans who do not want Obamacare also do not want a watered-down version of it.

Obama's plan features nearly identical enforcement clauses as Trump's, with one exclusion of smoking, which Trump removed as a scalable item, which like non-participation, could be penalized.

The momentum to overturn Obamacare exists in both party's constituents in a clear majority, as the sole population-demographic of inner-city residents, whom accepted the impositions of the bill's many subtleties and penalties as, "better than the hurdles that we normally face" when seeking medical care in other-than-emergency situations, are overwhelmingly outnumbered by the populations of rural communities.

Currently, all children, their mothers, while pregnant, or nursing, and all true emergencies for which the poor must seek assistance are covered by any number of programs that existed prior to Obamacare. Most of medical debts that continue to be overlooked are the supplementary payments owed by medicare recipients, of anywhere between 25-30% of the total bill, for which responsibility falls to the patients. Neither plan addresses this issue.

But the one, single criticism of now both party's plans, which is a huge and completely insipid failure to confront the issues faced by the disproportionately huge number of rural medicine patients, and their unique needs, and the doctors who treat them, continues to indict the thinking here as, "aloof", putting it mildly. This continues to indicate a charging headlong into a vertical nosedive of failures-to-come, including a one hundred percent failure of this largest sector of impoverished Americans.

Dr Jan Westerman, MD, spoke to the session of the House Committee on Health and Human Services, prior to Obamacare being voted on, and voiced the concerns of those in his profession which shall be stripped of the funding and the access to medical diagnostics equipment which feature prominently in rural medicine.

"I am not opposed to public funding for healthcare, but the fact is, that the plan Obama is promoting is flawed by a view of medicine that just ignored rural medicine, which is the largest demographic in the country. Obama's plan also removed the place where functional rural medicine and the huge rural population intersect, and simply must make a difference: the area of prevention."

Dr Westerman can add Trump's plan to that complaint. Clearly, both of these plans lack any attempt to assist rural medical providers, thus their patients, in providing a climate of prevention among what should be the most prioritized areas of intervention.

Preventive medicine should have been prioritized by either plan, prior to these failures becoming a cancer, for example, whose early detection could've made all the difference.

Objections to Obamacare and Trump's bill, also, continue to rally professionals who deal with these areas of medical discipline, and a lack immediate access to metropolitan-types of larger, university hospitals, over the durations of their entire careers.

Right now, the American public wants the penalties removed, as well as the end of the Oval Office determining limits upon providers as far as how many of what types of painkillers they can write, and these concerns dictate nearly 100% of the disapproval of the features of Obamacare, and possibly President Trump's plan, as well, by the people whom these plans would have affected. They do not want a overnight reissue of Obamacare, and the public fears this more than Obamacare, because it would shelf the issue with both parties until who knows when...

In typical fashion, Trump wants too much too soon. Repeal Obamacare. Seek rural practitioners' counsel, and redesign a feasible plan that doesn't regard grown people as four year olds for not wishing to participate...

But do not pass Trump care.

And this is the voice of American sick people, and their doctors.

This was added on the 27th of July, while FAKENEWS was prepping for another clash with reality a la election day. Do you believe me, now? 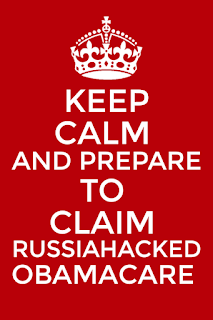 Email ThisBlogThis!Share to TwitterShare to FacebookShare to Pinterest
Labels: design practical bill, not enough differences between the plans, not really a failure, repeal Obamacare, Trump/Obamacare