There is perhaps no more of a destructive and selfish generation than the Baby Boomer generation. Taking into account that what this means differs between experts, but for this article the Baby Boomers are going to be "Children Born to Service Members And Their Wives Whom Fought WW2, Or Were Fighting Age During WW2."

If you fought in, or were married to a service member during Vietnam, or served afterwards, then this is not for you. God bless you for your sacrifice...(see lyrics for CCR: Fortunate Son)

There are very few generations so institutionally self-aware as the Baby Boomers. They went by other, more tell-tale names, such as the "Now" generation, or the "Me" generation, which is a simultaneous embracing of unbelievable selfishness, coupled with inexcusable social, as well as political, near-sightedness. But they are unparalleled in terms of social innovations which set the nation upon an irreversible path of bad ideas, and tragic consequences.

Among the permanent damage resulting from this generation is a host of re certified social values, a thick book of poorly-understood eastern philosophical terms, and the relegation, both via the media, and even the coined terms and phrases, of the disabandonment of the concept of the American family unit.

By the Summer of Love's graduation to the Summer of Hate, (1967-1968) the nation was rocked by both protests within, and a hugely expensive and pointless conflict in Vietnam. Meanwhile, the Baby Boomers at home deferred their perfunctory military service via the "Senator's Son" package of exonerations, affecting only the wealthy, or the very fortunate.

It is this time that the "Right On" salute graduated to violence, which culminates in the 1969 Tate LaBianca murders. But, this is the part of the illusion which Hollywood helped to cultivate, and the realities of Haight Ashbury were not the idiotic systems of humanity-inspired hippy culture, such as those which were framed by the media. By the time of the end of the Summer of Love, the Baby Boomer generation continued its "self-first" inner dialogue on Haight Ashbury; unaware of what lay ahead. It was, by 1968, a skid row of consequences, and drug addiction. And the Love....well, it was never actually possible. Real? Who knows. Impossible? Anyone sane could've told them that this was the case.

But they probably wouldn't have listened. 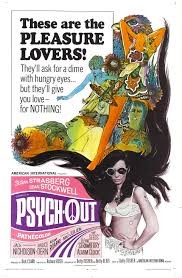 This is the first generation to place pointlessly dying young upon a pedestal, then do it, and to prefer this antiheroic climax...unless it was in Vietnam. But it isn't in the way F Scott Fitzgerald wrote, "In American lives, there are no second acts". He meant "one does what one has to."

The hippies meant that pleasure, and the search for it, should not be encumbered by the need to eat, for example


But these are only a few of the difficult to understand dichotomies which dot the hippy landscape...but you must know, they would not be the last...

Coming Of Age When You Are A Idiot

The Baby Boomer generation was the very first to both grow up in, be inspired by, and then make use of the film industry as a sort of means to spread the mythologies which its members felt about themselves....like in the 80's, when Phil Collins, a known Baby Boomer, declares, "...my generation will have to make it right", (Land of Confusion, 1985) this is typical even today in the Boomer autobiography.

In 1968, as the Summer of Love dawned something awful, tragic, yet predictable, and that impending darkness began to replace the drug-addled utopian hippy world in 1969, the Boomers were unwilling to realize that they had lost their way. Though it was released in 1968, the movie, "Psyche-Out"(1968, Dean Stockwell, Jack Nicholson) was an homage to themselves, one of many, and is a celebration of the society as they most wanted it to be...
Complete with the message that "Talent IS Automatically Rewarded", these types of films were like a new goldrush which filled the Bay Area with two types of people: those dumb enough to believe them, and those whom came to exploit those dumb enough to believe them.

I cannot help but to laugh uncontrollably whenever Psyche Out's bombastic messages appear, most hilarious of them all, the cut about 3/4 of the way through the run-time where pictures of Jesus are smash-cut into the figure of Jack Nicholson's hippy garb, and he says, "Who would listen to a long-haired freak wearing a robe?"

Classic Boomer grandeur. They make sure we get it, because they wanted us to understand! How free....how loving...

There are, in fact, very few realistic portrayals of the way life actually is, but this did nothing to prevent the Hollywood- borne mass-migration of the lowest class of people, to prey upon anybody whose incorrect egalitarian views demanded that they expose to them their vulnerabilities, and it is that egalitarianism which so horrifically jolted the Age Of Aquarius straight into Helter Skelter.
Typically hypocritical, the Boomers' seeking of selfless indulgences of pleasure and free love as a value gave way first to extreme pleasure seeking, and the excesses of the Disco era, then the pursuit of raw capitalism during the computer age.

To this hour, Boomers can be caught hugging trees, building nuclear bombs, and believing that they halted Vietnam, freed women, and gave blacks the right to vote. And there are a host of Boomers whom are all of these things in one individual. And, along with the nearly forty years it has taken to show them how wrong they were, serious damage per their arrogance was accomplished. They gave us the AIDS epidemic, the destruction of culture, the opportunity for political subversives to influence our society until the Bill of Rights has required very vocal defense.

But, they, in their half-read Eastern philosophy textbooks have coined incorrect definitions of some of their most sacred ideals, and then polluted Hollywood works with their mistakes until the point where only the educated, and the people whose cultures were robbed, know what these words actually mean.

The word agnostic refers to Coptic Christianity and their dogma of mystery religion. Agnostic beliefs have absolutely nothing to do with having reached a peace with either the existence, or non-existence, of a divine being. This is wrong on many levels, as the excommunication of the Agnostic Coptic Churches helped to shape the world, as we know it, today. And that excommunication explains the vast differences between Rastafarian Christian beliefs, and traditional ones, and how that sect developed, among other things. But until some Boomer was too high to recall what the word really meant, and misused it, and it became coined under an improper meaning, for almost 2,000 years we all knew what the word meant.

More tree-hugging vegetarian sixty three genders psychobabble: the concept of Karma which Americans have is an abomination to the Hindi religious sects who still believe in this force, akin to feng suay, which holds the world together, and then keeps it that way via balance. To Boomers, however, it is the process by which God avenges them when the man hassles them about their hair.


Most of us can recall the motorcycle repair manual, "Zen: And the Art of Motorcycle Repair", in which the author cites the Boomer abuse of a concept, in this case, the concept of Zen, in the title.

But Zen is not in anyway simple, nor is it an attitude: Zen is a rigidly set-forth system of meditative scenes, and accompanying philosophies, which are Japanese, and grew from Shinto, Hinto, and Buddhist belief systems. It is insulting to Japanese people the way Americans use it. And it is just typical drug-addled Boomer crap that these terms exist.

In like fashion, Boomers will inevitably defend their generation's drunken stupidity by claiming, "we invented Earth Day". In typical Boomer dichotomy, the real inventor of earth day, Ira Einhorn, whom, indeed, was a boomer, also murdered his girlfriend, which came as a shock to the stupid hippies who followed him. How, I don't know, but it happened.

ReBush: the misery in The Occident. Served by a "pro military" Boomer whom never fired one shot in anger, and, unfortunately for the world, never failed to dodge any shot at him because his military service was the contrived nothing of the children of elites.

That is why the only Boomers who deserve our undying respect, and gratitude, are those who fought in Vietnam, and those who died there.

Bill Clinton? Boomer, still venerating his "me" ethics, only now, by sexual acts with children. The jig is up, Bill...better eat a bullet, or your fans are going to awaken...

We could do this all day. From Hillary's preposterous self-inclusion in the Civil Rights Era, and that generation's tendencies to allow the many to take the credit for the acts of a brave few, the legacy of this poisoned generation, for better or worse, shall be gone, soon.

And, the many poisoned legacies, which only they continue to defend as anything but, shall eventually die with them. But, the morally reprehensible, like themselves, whom have come out of the woodwork since their day arrived, shall become victims of Boomer logic failures, as we try to help the world recover, knowing it may be too late: gay becoming normalized, the children suffering as a result of the search for pleasure, the new rules of living brought to us by the Boomers' Aids and Herpes epidemics, and we didn't get these because we knew they were full of shit.

The biggest difference between our generation and theirs is that we know we might fail. 99% of Boomers refuse to admit that they already did, a long, long time ago.

Email ThisBlogThis!Share to TwitterShare to FacebookShare to Pinterest
Labels: Baby Boomer Generation, Hitler Was A Vegetarian, Reality Check, The Worst Generation Ever