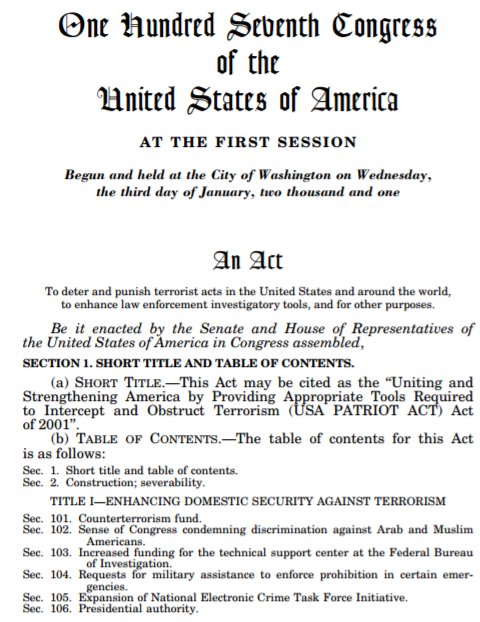 Clearly, most of the work that went into the first title of the Patriot Act was matching the acronym of patriot to this ideology:

In the event of another terrorist act, the Patriot Act Title One Section One (of six) provides for an emergency counter-terrorism fund to be created, to assist those affected, as well as those whom may need assistance, in the event of some unknown and future act of terror.

Section 2 protects the rights of Arabs and Muslims living in the United States.

Section 3 provides the FBI with a larger budget to expand the Technical Support Center, which is their digital technological section.

Under Section 4, allows for state and local officials, as well as relevant federal officials, to use the military to enforce order.

Section Five expands, and begins a reassessment of the Treasury and Justice Department's handling of cyber crimes. 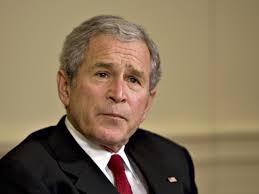 Section 6 is very short. So is the word "run", but, like this section, run has a bunch of definitions. Basically what this does is increase the access and the nature of presidential powers to handle foreign attacks, and circumventing such things as regulations of classified materials, as well as the Constitution.

The various sections define broad powers which only the government can violate with the exception of Section 2.

But they all describe a huge expansion of government powers.

These also serve the legal basis for the executive orders which created the Office of the Director of National Intelligence, as well as the Department of Homeland Security.

Subsequently, both of these EO's(12333 & 13388 for the ODNI initiative) and the Homeland Security executive order (13228) were taken up in bipartisan efforts to fastrack the opposition to, or debate any criticism of the president's intentions by the 107th US Congress, The Homeland Security Act of 2002, and The Intelligence Reform and Terrorism Prevention Act of 2004, which created the ODNI which was carried out by the 108th US Congress. 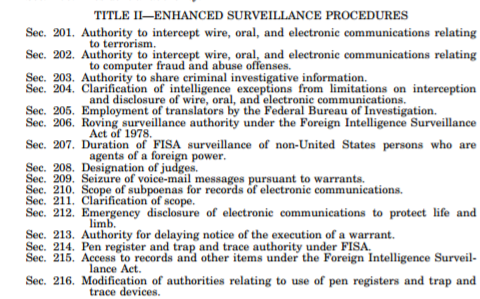 Title 2 of the Patriot Act is arguably the most controversial piece of legislation ever undertaken by US lawmakers. In an expansion of the 1978 FISA (Foreign Intelligence Security Act) which allowed federal agents a more relaxed set of federal guidelines in regards to the wiretapping of suspected spies, Title 2 represents the very first legal statutes about government eavesdropping on suspected terrorists, including spies, via their digital devices. Prior to this law, the internet was not as travelled as it is, now, thus many areas regarding the possible evidentiary value of digital information acquired by less than certain Constitutional terms presented a dilemma for federal agents tasked with dispositions towards preventing acts of terror, and prosecuting those who committ them.

To put it into perspective, Facebook didn't exist until three years after this title is enacted, but this title is the source of what would become the biggest battleground between people defending their privacy and individual rights, and the US government, whom promised not to abuse the power. One of the lies told by James Clapper when he testified before Congress in 2013 was that the NSA was not eavesdropping on US citizens. Whistleblower Snowden revealed material that conclusively proved Clapper's testimony to be false, that the government, by 2013 was collecting, and purchasing data information from social network providers, without complying with the US Constitution.

By now, four years later, WikiLeaks has proven that the provisions for the act, to be used only against spies and terrorists, are not being applied, and the government of the US, for whatever reason, has labeled us all as potential spies, and terrorists. It is a government under foreign influence, and very much out of control.

Title 2 is more revolutionary in terms of increased governmental surveillance than any other previous or subsequent acts. Its 25 different sections describe the FISA rulings of 1978, and to the many varying degrees of surveillance, which agencies might choose to use, for the purpose of both phone, and ultimately, digital eavesdropping. It is the representation of quantum regulatory leaps into the computer age, which it defines in terms of the many aspects which might interest the various security agencies of the US.

But that it is currently being abused is a fact. WikiLeaks, whistleblowers, and common sense describe a surveillance-effort that is both unregulated, and aimed at people whom could not possibly have been mistaken for spies or terrorists. It is a government clearly afraid of its own citizens.

The reason that I am going over these is clear: the Congressional mission which introduced the legislative versions of these executive orders, as well as the president who signed them, were bipartisan, very quick, and all Bilderberger members. Every single one.

To suggest that these first two titles demonstrate a government which is swelling with power would be an understatement. But applicable Constitutional prohibitions which should prevent these types of people whose positions have been used almost exclusively to preserve the secret societies of Globalism, as well as their hold on power, somehow, are not applying.

Article II, Sec 2, Clause 2 of the US Constitution prevents the negotiations with foreigners, and restricts all collusion with foreign powers to the President, and through Congressional approval. This is the US Law which is being constantly violated by each US Bilderberger.


The US Constitution prevents foreign individuals, as well as US citizens, from acting under foreign orders within the US government. It specifically sets guidelines which prevent the people of the US from being victimized by their own government should members of the US government act on behalf of the office they hold, and in such a way as to promote an influence that is in league with foreign powers, like the Bilderbergers.

Trump is an outsider to the Globalist agenda. He threatens the fifty plus years of indignity that these people have brought to our shores. Most Globalists fear him, despise him, and remain astonished that he won because they know that Russiahacked is a lie. The expounding of the implications of election 2016, at least as Globalists view it, has tragedies at every turn.

With Brexit, and louder cries in response to Bilderberger members' criminal activities as per the Panama Papers, this election represents a lot of bad news, and a lot of earth-shatter in terms of how a non-Globalist could actually win a US election. The most poignant statement of Trump's victory, and the one that they fear most of all, is their loss of power.

The reason Russiahacked existed was Trump's friendship with Vlad Putin. The President of Russia terrifies Globalists, by an extreme defence of Russian economic means, and the "arrest on sight" orders in regards to the stars of Fractional Reserve Banking, and, most alarming to Globalists: the arrest on sight orders against the Rothschilds, in particular.

Regardless of their national origins, Putin wisely judges these people not as German, or British, but as citizens of Globalism. And its Greek Tragedy like lessons, and the people whom would bring about those dregs, are simply not welcome in Russia.

Putin has made it abundantly clear that exploiting anything Russian is absolutely not going to be tolerated. Globalists shall not be permitted to repeat the endless cycle of harm that their system has done to the rest of the world. Putin has been described as an "obstructionist" by the Globalist elite in Scientology-like relegation efforts. This is the highest honor a Non Globalist can achieve, and it conveys a puniditized reverberation against Globalism, and the inventors of Globalism: the Rothschilds and the Rockerfellers.

It is because Globalists fear Putin that Russiahacked will most likely continue. The mea culpas beginning recently will inevitably be interrupted by the coordinated Bilderberger effort to repeat the accusations. But, sooner or later, the thing dies.

Putin and Trump should post pictures of themselves partying together. Anything that scares Globalists is ok with me.

At the G-20 meeting in Hamburg, the two will probably meet. If Putin forgives Trump, we are safe.

But this forgiveness shall require an extremely more clarified Syrian alliance role for the US. As it is clear, Globalists within the media and the US government are clawing and screaming for any desperate device they might conjure as to prevent this from happening.

Tune in, as we spell out these titles, and potential abuses in which they may result.


There are two kinds of violations of laws as far as the US Congress is concerned: the laws only Congress could possibly violate, and the kind individuals, or groups that are being regulated can violate. There is currently no political structure to confront the violations of laws which are mandated by members of the US Govt participating in groups who are attempting to express power into the US for any reason.
at July 07, 2017