The Amazing Randy once famously offered one million dollars for any proof of psychic phenomena being real. I am seriously considering seeking an endowment so that I can offer a million dollars to anyone who can prove Russiahacked is real...


Nikki Haley is not an example of getting a Globalist into the tent and everybody pissing out of it, but in the name of the lying James Clapper, and in spite of any actual proof, she has made clear that any headway for repairing an ailing AntiGlobalism Russo-US alliance is certainly threatened by her cleaving to the Russiahacked dogmas. Not that she believes them, but as the US takes the helm for its rotation as head of UN Sec Council, the Bilderbergers whispering, "seduction" shall become more and more of a threat and offense to the natural order...

Nikki Haley is a Globalist Republican, a la ReBush, whom made headlines when she threatened to defy Candidate Trump, were he elected, should he follow through with the promises to reject the political climate of making the US a refugee camp. The decision to bring her into the fold was most-likely not by her wanting to be, but by the offer from Trump to swing some accord, and, simultaneously silence a go-to critic from his own party to stop her constant facetime and critical analysis by saying, "yes" each time her pointy face was asked to do so by MSM.

Let's get something straight, here. The media is not going to simply be allowed to just suppress its role in so much Globalist attempt at destroying the security of the nation unless we give in to their blackmail. Black Lives Matter...Russiahacked...., its assertions pizzagate isn't real, and attempting to bury the careers of anyone saying differently: each of these are unfairly under the dispositions of foreign influence in this nation, an influence over government and media, alike.

Russiahacked consisted of two components, both of which must be true, or the conspiracy theory can not be real:
Either way, by pointing the finger, alone, the media jumped the gun, and would come to regret it. But that didn't stop Nikki Haley, COFP member, from once again, firing the engines of nonsense loudly, and pointlessly, claiming, "Nobody doubts Russiahacked is real."

Well, Nikki, pudding, you are wrong.

But let's clarify: did Trump, or his campaign, collude with Russia? Oh? You mean, the Globalist attempt to eat the career of fine Army officer Mike Flynn was....what?  BASED ON LIES?

Then, my friends, what the fuck are you talking about? What interference?

We have watched the "collusion" element of the theory vanish in the cold light of analytical reason.

Thus, the remainder is stillborn, as she and her fellow Globalists have to know: the interference implied by her assertions is not the Russiahacked interference which she is implying it is, in the sin of her omission, and assumption of our ignorance. Because, in either case, there isn't any.

AntiGlobalism is not due to Russian interference: it is the last defense against un American values, and of democracy in this century. AntiGlobalism is all that stands between collapse and those American values, like those endeared and put forth by our Founding Fathers, and just because Russia is too smart to permit Globalism there does not automatically indemnify any accusations against Russia or us for siding with their decision to reject the evils of Globalism with "pro-American-ness", whatsoever. So, please, quit the rally around the Globalist US flag routine.

And just because the Clintons and Bushes are wicked Globalists, does not mean we were all on board with the increasing disparity between the citizens of the US and the Government of the US, which has chosen sorrow for us, and hot windbaggery for themselves.

But we know that Five Eyes has fixed the elections within the member states of its own nations, putting corrupt people into power in Australia, in spite of their bloody hands and stolen cash. The election of 1972 was entirely overturned by CIA. This is why the character of the Falcon, from The Falcon And The Snowman, started giving Russians secret US satellite data.

A countless phonebook full of justification for Russians to interfere not only exists, but it does so, and answers the real reasons you people just will not give up the ghost of this nonsense until time passes your world view by. Your nation probably fears that what it has done, and so damagingly, will one day come home to roost. But the realities are simple: Russia is a Christian nation. Russians know what wrong and right is.


The US was, and has not done anything except decline since it made the choice to not be one, anymore.

Please, show this proof. Or shut the fuck up. And by proof, we mean quit trying to backpaddle: prove both parts of Russiahacked are real, or shut up.

Clarify what interference, where, and when? As not one single bill which re-imagines the US voting precincts other than what they were, then, and what they continue being, has been introduced into Congress....Or, shall each time that the American electorate demonstrates its increasing scepticism of the Globalist agenda going to be followed with the claims and cries of "Somebodyhacked"!? Just stop. 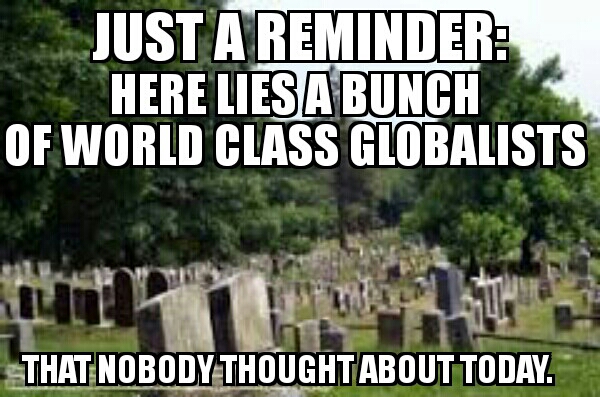 Email ThisBlogThis!Share to TwitterShare to FacebookShare to Pinterest
Labels: Globalism must die, no Russiahacked, NOW, Proof or Apology