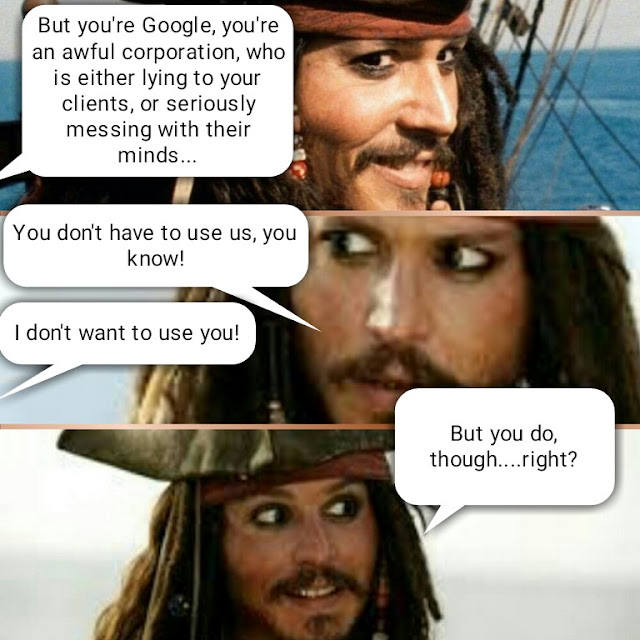 Google is the largest search engine on earth. With no academic groups to ensure its many sources of factual assertions, ranging from Wikipedia, which is wrong about many things, to its very own Graph Calculator: there is a very real concern that soon there will be the ability to cause a gigantically delusional view of the world which this corporate entity can accomplish... And this, in spite of evidence that suggests there may be something going on, something unsettling....something now...

How do we know this? We know because of the math. We know because I joined a large academic effort and personally have sent feedback message after feedback message, and the Graph Calculator is still suffering from the identical glitch as it has always suffered from: but some magic how, the answer to the following algebra problem was, finally, corrected.

The problem was one of the many viral problems which go around, and even had a website, which is considered to be the last word in Algebraic questions, determining an incorrect answer of 1.

When I am grading your paper, and I see the answer 1, I know right away that you will need work on fractions and the distributive property. The improper usage of the distributive property is one of the most common mistakes plaguing students of Algebra. Some will go their entire lives bitterly arguing a bad interpretation of it, until they are given a proper instruction as to its many ramifications within the order of operations.

Due to the glitch, or rather, what at first, I believed was merely a glitch, the graph calculator produced the wrong answer of 1 consistently. First, let's look at how they arrived at the incorrect answer: 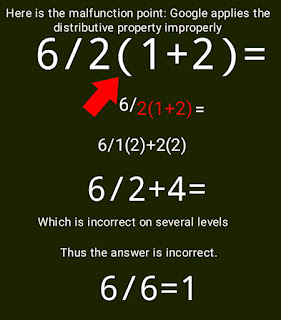 The graph calculator incorrectly allowed for the distributive property of multiplication to be applied only to the denominator, or the divisor, however one might choose to assess the 2 in 6/2, and this is a malfunction.

In academia, on the ACT, SAT, and a host of other similar tests, the correct answer of 9 is the only one which will get the testee credit for that problem.
It is correct in high schools as 9, and in every university in this nation. So, a group of us got together, and constantly hit "feedback" in an effort to correct Google...

Because this is Algebra, and it is an exact science.
It is static, and thousands of years old. It connects us to the classical age of Greece, and Euclid, and Pythagoras, among others; Algebra connects us in a living way to those whom first recognized the nature of these numbers in relation to one another.

For Google to ensure that an entire generation of unwise and digitally-faithful millennials shall not only be tricked, but shall march out to war convinced of, and fully believing in Google's authority, that it is something unquestionable, gives pause to the potential to examine this further. Just exactly how much of Google's data is flawed, and who will answer for these students' failures to perform these problems, understand the news is fake, or that they should not just send all their money to whomever, when Google conducts them into those types of failures?

The reason I ask, is the next problem has had the identical campaigners protesting the glitch, whether diabolical mind-control, or true accident, the same people are asking "why": all except me. The thing is, they corrected their glitch, right? You tell me:

2(2)+2(2)-[2-2(2)]= in abutted expressions, the negative* sign stays out of the brackets, and the signs change for the set of integers (-2+2), but not for the multiplier (2) as if mutliplication has occured...thus positives inside brackets, except the multiplier, in this case, (2), are negative now.*(if it is a plus sign, then the signs within the brackets remain the same)

...changing the orders integers occur in, as long as we don't assert a change to the sanctity of the expression, doesn't alter the product: f(v)(j)=j(v)f via the commutative property. So, in order to get the wrong answer of 10, we must:
2(2)+2(2)-2+2(2)=4+4-2=6+2(2)=6+4=10
This is the same glitch from the other problem, improper distributive property assessment, only now, it asserts that the expression -2+2(2) is a) not subject to the order of operations, and b) is not a distributive function.

If, for instance we had 2(2)+2(2)-2+2(2) and we simply assess the first values, as 8, we still have abutted to that 8 the product of the difference of two from two, and that difference times two! In every classroom in America, that product is zero.

Thus, by the Commutative and Distributive Properties, if we had 8, we would still have [-2+2(2)]!

In my class, I would award half credit for assessing this problem using the Commutative and Distributive Properties properly.

The Graph Calculator doesn't bother me, I know it is wrong, but I didn't join the academic effort to change this incorrect answer. I have deduced that Google simply has to know...

There are 63 genders, no God, and an illegal president, if we are to believe Google. I know better.... 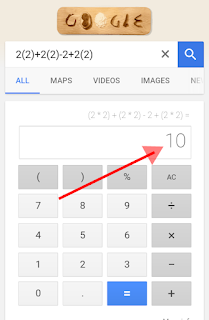 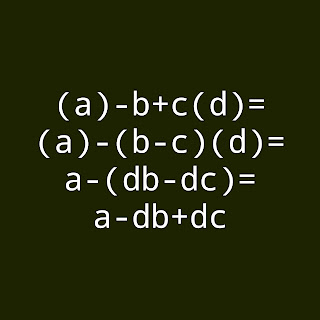 This explains how the brackets do not alter the sign for d... 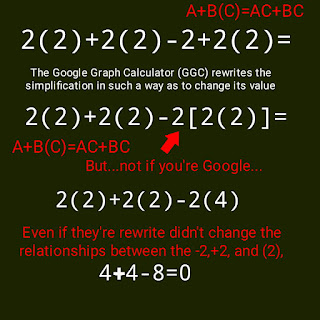 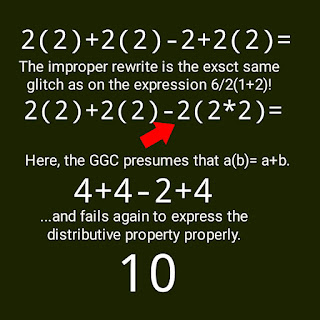 This was the result of how messy the others were...KD

Email ThisBlogThis!Share to TwitterShare to FacebookShare to Pinterest
Labels: Google is an evil company, One cannot learn math via Google, this is why people still believe that Clinton won, we are trying to warn you, ye art a lost millennial generation