What Will James Comey Say? 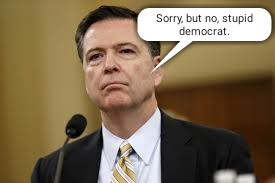 What Will James Comey Say During His Wednesday Testimony?


If you hold your head at an angle, and pretend a lot, you can feel the anxious buzz of Democrat-propaganda ministers staffing those old and completely ruined rags, The Washington Post, The New York Times, and several others, as they fill their heads with Nate Silver-like pre-election baloney, and send speculations out upon the boomerang of crushing disappointment: because I do not claim to know what Comey will say. But I know what he will not say, and that, conclusively, is"Hillary won."

What he will not say is, "The FBI has, in its hot little hands, evidence that Russians were able to en-trance the public via a state-run effort, and then hack the ballots so some magic how, Hillary won."

Face it, this is the orgasmic event Democrats have awaited since election day. And, like election day, they will shuffle about, kick the dogs, holler, and rant: but Comey cannot prove that Russians hacked the election, he cannot make a retroactive law forbidding people to work for or in Russia, and he cannot ascertain the content of any conversations which may, or may not have taken place.


The way it is does not make sense to these deluded masses whose ivory towers have ruined their journalistic integrity, and they are probably refitting Mrs Clinton for her inaugural ball gowns as we speak.


"....Comey expected to testify that Russians fixed the election..." -The News, Tuesday Night


The truth is, if Comey has any integrity, he cannot bring it up, not will not, cannot.
Any reference to any knowledge he has about what could lead into pizzagate would endanger the Clintons far more than it could possibly help their cause, therefore two-thirds of Mrs Clinton's excuse is already dead in the water.

Pizzagate inquiries are in-effect, and though he is retired, expect this subject, and any subject which could be considered adjacent, to be thoroughly discouraged from the agenda. On-going investigations will, in every way, turn this into the third or fourth election loss for the Liar's News, as well as their candidate. 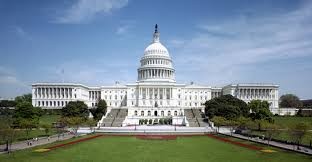 Stick A Fork In It, Would You?

That the celebrations shall be unbearable by Tuesday evening makes me shudder: the policies of EU is getting Europeans murdered, but mention the word "Hillary" and it is like whispering the word "sex" in a Clinton family reunion: everyone is all ears. For some reason the Clinton/EU mutual admiration society nearly accomplished a Muslim foothold for IS here, in CONUS, and we dodged a bullet. If not for his idiot act in Syria, I would praise Trump....but he fell for Netanyahu's bait. However, to his credit, he withdrew the US from the waste of paper, and short-sale of our sovereignty which awaited us in the Paris Accords, and he refused to send an embassy to Jerusalem. Two smart moves.

Meanwhile, the reality bored me this time, last year, when these same fakenews shoe-shiners were doing January victory rolls for an election that was anything but certain.


The light still beckons from the end of the tunnel, and let me tell you how this is going to conclude: there will be a schism between the fake news/bilderberger press, and the majority of Americans, whom, like I, am aware that Bilderberger's Steering Committee convened this weekend and for the next ten days or so in West Virginia. Only We Are Change is covering it.


I can see it in the form of a winded beast, in the shape of Bilderberger Euro and American steering committee members, feeling the absence of David Rockerfeller, as they sit quietly in rooms sweltering from the broken ac units, which features the stains of sweat prominently upon their blue and white rolled up dress shirt sleeves. They smile what they each secretly know is the kind of smile that is, when we are in the beginning of the end. And their cigarette smoke wafts into the hallways, as their televisions, tuned to Comey, only give drunken hopes for the dream that reality killed. It is in these rooms, this very week, that dream, Globalism, shall die. As the false news anchors and stars divide their time between lying to us for this committee, and reveling with them, the last echoes of their laughter shall certainly fade. Meanwhile, the phrase Sic Transit Gloria shall finally begin to deposit its long-suspended due upon them. 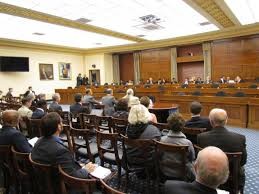 The testimony Comey gives will be picked clean of any edible election drama meat, and parceled- out to the masses of democrat idiot and stupefied members whom are doing what is the equivalent of walking into oncoming traffic by offering their support to the worldwide problems being created by Globalism: and they will close ranks, endure each other's ignorant and selfish views of the world, united, if only for one more hope that will die in their throats before they trigger into the pockets of easily divided immoral Cretans that they have been hand-raised to become.

Then, on Thursday morning will be the feast, although movable, it is completely contrived, and their Facebook posts, and their memes shall be laughingly countered, as blindly, they follow their heroes into a loud and empty-can rattling most type of retirement. And, complete with fake elder statesman status for impeached president number three, and his felonious windbag of a spouse, as together, they lean with the chorus of fellow baby boomers who write and publish the fake news that feeds them. Together, they will sing Fleetwood Mac songs off-key, and flattering themselves....you know, like they do everyday.

Then one shall prick his ears, like a hungry dog answering a cheese wrapper, and together they will attempt more slander....only they cannot afford to take notice as the rest of earth quietly gets real.

Then, when he is finished, hopefully by Monday, a janitor in the Capitol building will jockey a chair dolly and begin folding them loyally, and quietly....knowing the only candidate who honestly cared about his lot in life is the one who won, whomever they say that is. He could care less. 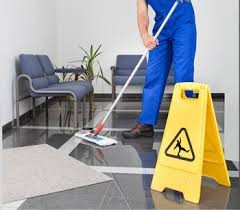 Email ThisBlogThis!Share to TwitterShare to FacebookShare to Pinterest
Labels: Comey Testimony, No, She Still Lost Due To Her Embrace Of Lunatic Fringes, Stupid Democrat