The Indoctrinated Children of EU 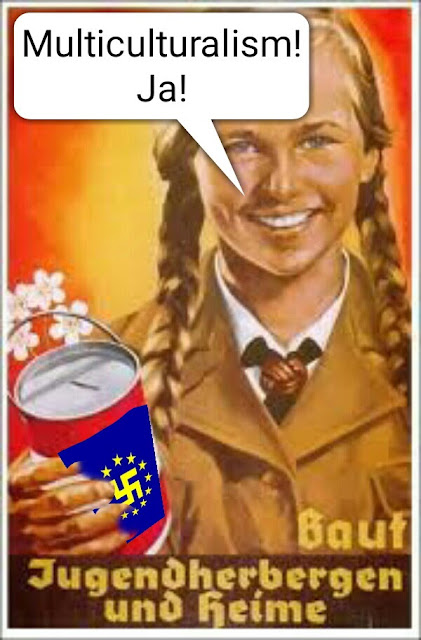 It is unfathomable that the lies which persist in EU continue unchallenged like they do. It is as if people who know better are trapped trying to express common sense within the hypnosis EU has used to create the matrix of the lies in which all inquiry about it must take place...If you lived in Europe prior to 2001, and if you ever saw the EU flag flying in Bonn, beside the German flag, please tell me when, and where: because the children of Europe are lost in the oozing bowels of indoctrination and mythologies self professed and published. And these measures are familiar to Merkel, especially. She was a member of the old Communist version of the Hitler Youth, the Young Communist League of Germany. And these tactics came straight out of the handbook for replacing the bourgeois with proletariat-friendly vernacular meant to wipe-out all dissenting opinion. 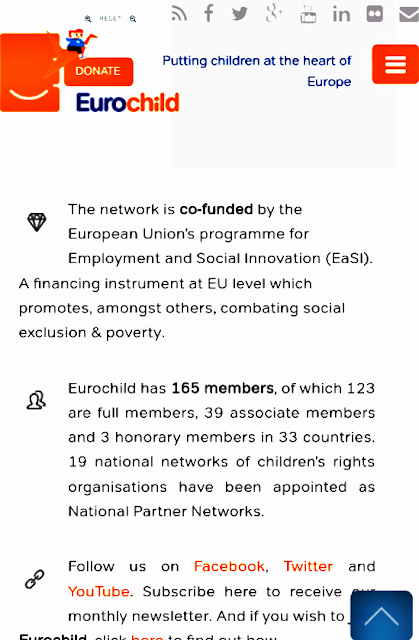 The education system that is overseen by the EU Comm is actually not decentralized. What this means is that, when it comes to indoctrinating children, the devil is in the details. Oh, he is in there, in the second statement in the About Us section of the Eurochild Organization's website:

"Our vision is of a society where people grow up happy, healthy, and confident, respected as individuals in their own right."

Well, if that were true, why does EU not simply tell them the truth, that it is only sixteen years old...why all the lies?
The simple fact of the matter is that the access which EU demands to children is exactly that of a cult leader: they must become adherent, nay, not this alone, but must become agents and participants in the realization of a world order that has twice brought Worldwide conflict, and the deaths of hundreds of millions of people. Face it: some of these children will never find out the truth, but some shall. And the resentment of those that do will not be one of peaceful discourse.  But why, why does EU oversee the standardization of education as one of under ten Eurowide efforts in which the organizational structure is not decentralized, and is handled directly by the authorities in Strasbourg?


Artemis, Eurostat, Eurofound: these are examples of agencies considered to be autonomous by EU, itself. But the standards of education in Germany, for instance, West Germany, did not require this type of oversight by the EU Commission in Strasbourg. So, why does it require this, now?


There are virtual mountains of pdf files and websites to visit, but the key to understanding this is to a) remember EU is lying about its existence, and b) wants its idiot-ethic (63 genders, multiculturalism, and others) to be fundamental values to its youth. And these values are neither traditional, religious, nor sane. But EU has successfully redefined what is traditional, what is religion, and what is sane. And lurking in all the contradiction is a clear design against the human race, the poor, the traditionally Catholic, (meaning, those whom know that this papal muttering about sexuality is very off-Christian ethic), and the Protestant faiths of Europe.

But this must infuriate the Orthodoxy more than anyone. The churches of Eastern Europe probably view this imposition in accurate terminologies; it is something that they endured during the initial Bolshevik attempts to wipe out religion, entirely. And somehow....in the West, Southern, and Central European homelands, we have simply ignored this effort to rewrite history in EU's multicultural image. And that effort is one so vital to EU, that it is undertaken from Strasbourg, itself. And it is unwilling to delegate that awesome effort to any one else.

Although it is an all-too-familar effort to Frau Merkel, whose childhood endured this type of indoctrination, which was front and center in East Germany's baby boomer and older Gen X citizens. It involved the tenets of Communism's inherent superiority over free thought, and free dissent, and Merkel has driven the effort to repeat this madness in every child born in EU whose parents leave the scars of Refugee Violence unchallenged. Because it is one familiar to her.


The Muslims are right...opportunity makes a thief. It isn't their fault you allow this insanity, much less, its unfettered and daily access to your children. Charity begins at home, but for Smilin Angele, it first must begin with the fallibility of Europe's children in embracing with her the opportunity in which the refugee acts occur, the belief that multiculturalism exists....because one attack against Christians by Muslims on European soil is proof that it does not, but they have an answer for that, too. Just go up to any five year old in Europe, they can tell you...
at June 12, 2017

Email ThisBlogThis!Share to TwitterShare to FacebookShare to Pinterest
Labels: Eurochild is the new hitler communist youth