The Free State of Hesse 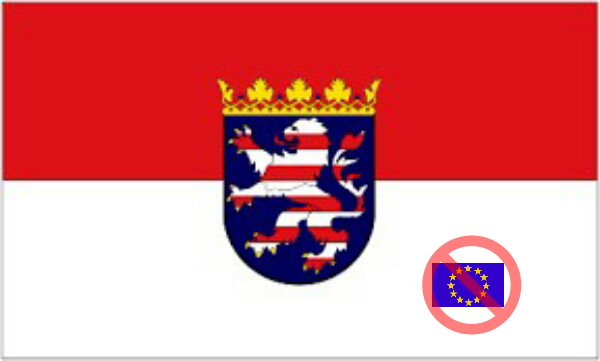 There are few men more stupid than a German one whom supports Mama Merkel's "Lose Your Country" Logic, which operates against the German people daily, and with the support of...wouldn't you know it...the German people!

This cannot be democracy! Obviously her Communist upbringing has brought Germany to the brink of ruin, Europe with it, and instead of an uprising, there are "touchy feely" millennials having adults shitting their pants at the notion of their repeating the new Marxist nomenclature for those who love their freedom: "racist!"

But what holds Germany together is not as written in rock as you think. And if something isn't done to stop them, EU is busily, ignorantly, greedily, and contradictorily to better judgement, sowing the seeds of a third, and final, world war.

September 27, 2017 offers no relief from that common-sense detesting common-sense hating life chewing moth, but there is one way....
Enter the Free State of Hesse.

The American Provisional Government hacked Greater Hesse out of Prussian governance at the conclusion of the Second World War. Therefore, the ties binding it to the Bundesrepublik are not as solid as they are operating themselves to be. Frankfurt has the bank, and in modern terminologies, the bank is the nation. Meanwhile, the €3,000 it takes to coddle your murderers in Jordan costs €30,000 in Hesse, and maybe one way out is to secede from the Bundesrepublik, and become the Bundesland Frei Auf Hesse.

This has a better chance than ousting that devil's footstool Merkel from her clammy hold on Berlin. She will not stop until nothing remains.

September 27 is a'comin, and it may as well not: she has a brainwashed limpwristed stable of animal pricks doctoring the brains of the young. A solution must be made.

Email ThisBlogThis!Share to TwitterShare to FacebookShare to Pinterest
Labels: Make it happen, Secede from Deutshland Jetzt