Part 2 of Eurostat: It Is Still Lying 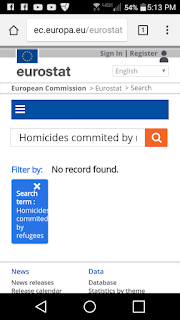 These sites run by EU, like many, contain cookies which act like search refiners. So, when I used the same device, and misspell committed, the cookies filter the correct spelling. Not for this search heading, however. 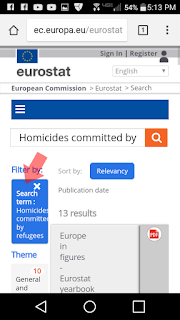 Here, in this example, I used the corrected spelling. But I also used the same device as I used on part one of Eurostat, and the search heading, as well as the function of Eurostat's website seems like it has an effort designed to dissuade anyone from making any type of search whose result could be critical of EU. As I said in part one, I was going to see if a system of analysis called "regime analysis" could be used to analyse Eurostat's relationships to EU, and to other EU agencies, as well as Brussels, Strasbourgh, and Luxembourg.

It is simply going to take greater effort at ruffling their feathers in order to provoke the type of response from Eurostat which could then be used for the purposes of analysis.

In the second plate, note the arrow designating the entire search heading, due to the site's design causing it to be impossible to see completely. Spelling now corrected, the identical thirteen results render no real useful information, and certainly not the data I asked for.

The reality is that homicides, arsons, and rapes are prolific throughout EU. And that this horrific rise in those statistics cannot be ignored by an agency, such as Eurostat, which made the implausibly ignorant and relegating claim, "Thus, after four years in EU, the €30,000 spent annually to feed, clothe, quarter, and entertain each refugee shall dramatically decrease, as they graduate from their Bachelor's Degree University programmes, and begin the journey towards self-sufficiency...."
Pardon me, I thought I was over that, already. But I feel overcome by a sudden bout of nausea... 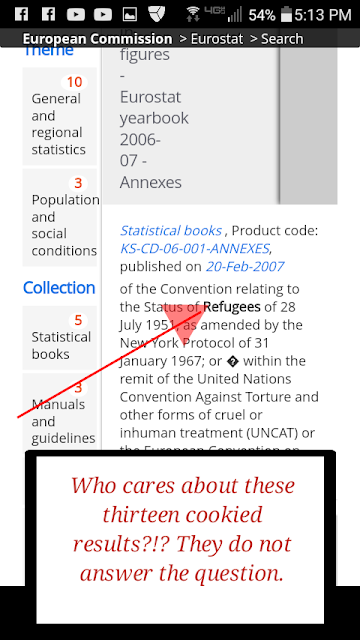 These enlarged results pages are 2/13ths of the result, but 100% of the type of result available. EU hiding these numbers, while demonstrating yet more regime-arrogance, has done nothing to deter citizens in EU whom have suffered because of the errant refugee policy being fielded by Strasbourgh. 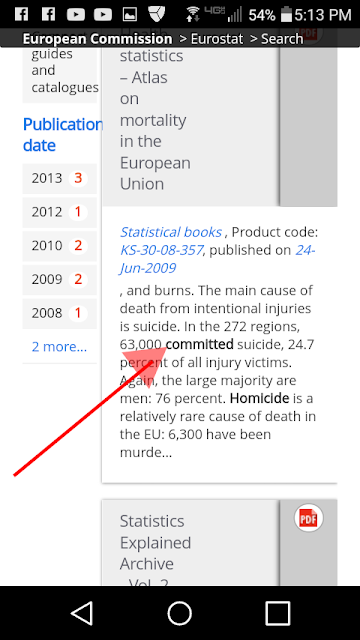 The fact of the matter remains: we know, for certain, that refugees are engaged in these criminal acts. We also know, for certain, that these statistics must look more like a rocket launch, than peaks and valleys. Yet, the fact that an aloof ignorance is being projected here really says it all: we have lied to you about the numbers, and we fear the criticism when that fact is one we must answer for, publicly.

I have other avenues which I am now considering, including writing the Director General of Eurostat's Office, and wording the letter very carefully, and trying to prise the truth from the lockjaws of secrecy a bit more vigorously. But you see, dear reader: EU is not just going to tell us the truth.

This leaves EU analysis to conclude that it is a repressive regime. Repressive regimes are those regimes which, for whatever reason, feel that its citizenry must be protected from information which 1) the regime's leaders feel contradicts that regime's security, and/or 2) presents an alternative morality to those enforced by the regime.

North Korea, for example, has no intention of telling its citizen's of the danger they are in due to the regime's relative lack of experience dealing with other national values and regimes. Yet, the regime continually endangers the security of their population. To contend with this, the regime convinces the population, for better or worse, that the values and nations which it abhors are, in reality, causing the regime to act in the population's defence.

But EU engages in something a little more malaise-inspiring: EU literally uses Eurostat as a source of statistics which assuages the outrage, thus the criticism, of EU. Unfortunately, for two major reasons is this approach flawed: the problems are real, and people see that.

Repressive regimes have no way to deal with that, killing the critic validates his criticism, while doing nothing causes the population to join, and demand accountability.

In Rome, Casa Pound has been rioting for that nation's adherence to EU policy to come to an end, and the police trying to intervene seem to be doing so in spite of agreeing with the rioting citizens. In EU, regime accountability is not possible in the capitol, anymore. But the rage of the population for some sort, any sort, of accountability, cannot go ignored. And by the same token, the answers coming from the Italian government seem increasingly one-dimensional, like they are only going through the motions, and that they feel like rioting in Strasbourgh, and Brussels.

The repression offered by Rome conflicts with Italian interests, in general, and this lack of functional exercise of complaint, accountability, then reform is a recipe for regime destruction.

Rome can simply not expect the people of Italy to continue playing second fiddle: this process is converting Europe into a third world country.
Derogation: a ruling by the EU High Court allowing a member state to be relieved of a burden or set of burdens incurred by compliance with EU regulation.

To date, EU has granted almost no derogations for the refugee policies.
Thus, Rome now has the duty to show that, if EU is too arrogant to address the very real mandate in Italy for reform, then Rome could lose its regime; this should validate the derogations further than "some refugees cannot come".

Italy is in desperate need of banking relief, and of extreme derogations, but its highly unlikely Strasbourgh, Brussels, nor Luxembourgh will take the plunge, show the initiative, and give it to them.

This is an example of repressive regime splintering, as it loses control over the function of its government. Italy is at a major crossroads, and the world is watching. But, like it conceals the facts of the murders refugees commit, EU is going to demonstrate that its position is unyielding due to deference, ie...(we want to help, but no one is certain which agency is supposed to do the helping...)

This "deference failure" is bureaucratic technique, and perfectly illustrates the failure EU represents as a regime.

They shall not. Their country is being used to replace them with people who cannot even speak Italian.