Liar's Anonymous: Who Do We Believe?

Although there are definite party-lines in the world of the media, journalism has two standards by which they are judged: those who got caught lying, and those whom have not....yet. Now, I am not saying that they all lie...

I am simply saying a whole lot of them do.

There is no excuse for the lies. Especially when they are politically motivated. But, believe it or not, most journalists were not caught in some questionable political assertion or ambiguously drawn conclusions which might favor one party, or another. If it were only that simple.

Actually, most of the journalists historically caught falsifying stories were driven by a personal ambition in which their publications were merely vehicles on the road to a self-aggrandizing journey.

The aggrandizement is usually about themselves, as in Brian Williams' case, when he may have used some figurative language to describe his helicopter journey while on the scene in war-torn Iraq. Sometimes the aggrandizement comes by way of a third party or social issue, as in the case of Janet Cooke, a reporter for The Washington Post, whose total invention of a source so inflamed the passions of the DC Metropolitan authorities, that she was discovered as a liar due to these city functionaries' inability to locate and rescue the source, whom she reported was an "eight year old African American heroin addict victimised by the harsh aspects of poverty, crime, and the drug epidemic". Her story, Jimmy's World, won the 1981 Pulitzer Prize. But these cases are easy to debunk.

Line them up however you like, the ones whom have been caught are far less in number than those whose stories bear enough truth in them to remain insignificant, thus fly below the radar, both of salary as well as recognition.

But it is the ones who do not get caught that do the most damage. 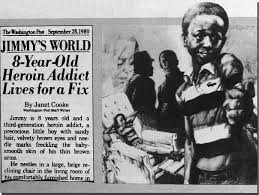 That's just it, though: ever since William Randolph Hearst infuriated the American public by quantifying the national horror and rage into three short words, "Remember the Maine!", the public's imagination became so much marionette for the strings and fingers of unscrupulous men whom expressed their darker and more base urges into the hearts and minds like Judas Iscariot whispering into the braids, "Let me kiss thou, O Lord..."

And the resulting effect, first pioneered on a national basis via the deification of gunslingers and outlaws in the "Old West", continued all the way till this hour, when the gun for hire journalistic values of any given publication will be happy to help bring about the war that their politician seeks, or....the peace. And they make us like it, too.

But do not believe that this is a thing of the past....not by any stretch of the imagination is it something which has been purged from the widely circulated publications of today. But, by similar token, when a left wing candidate's stand by publications turn on them, and they do now and again, well that left wing politician knows its over. And likewise with the right wing. 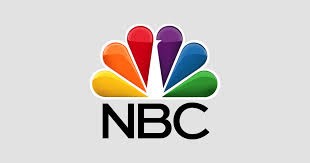 What makes the difference in whether or not any given journalist gets caught engaging in, well, let's call it "extreme creativity", seems to be whether or not his fellows at the editorial level, both at his employer's, as well as his competitor's offices, can easily put that reporter's story into tomorrow's front page. For his former employer, it serves the dual purpose of mea culpa, as well as occupying the scoop du jour, and for the competitors, it is like wondering aloud how many lies were not caught before this person was fired, as if to say, "Yeah, but we do not lie to our public...'

But it is the mainstream media: they have all been caught. 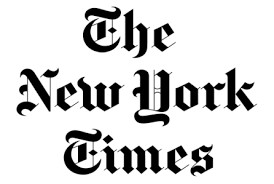 Enter the 1953 Bilderberger Group, so named after the hotel in the Netherlands where these inbred and half dazed fiscal daywalking vampires decided that, if they were indeed going to control the world, they would need to control both Hollywood, as well as the East Coast publications in the US, in particular.

Television was the days of the new, and they also explored many avenues of controlling it, until they simply decided, "Hey, we can catch more flies with honey!" and they compiled a list of who's who as far as media and journalists go, and they included those whom they could flatter into betraying the art of the written word over to the dictates of propaganda. The result was the Bilderberger-Controlled Media, which holds sway even over the US Armed Forces Publication, "The Stars and Stripes."

There is a ubiquitousness about the Bilderberger presence in the media. And it has thoroughly saturated the minds of Europeans, especially, whom routinely buy into the phenomenon of multi culturalism,which could best be defined as "the method by which imported murderers are invited in by the unsuspecting working class..."

Bilderberger controlled lies always favor Globalism. That is reason number one we should question this ideology.

Bilderberger media control is how the actual murderers of Kennedy remained free, it is the device which both helped to invent, then deploy effectively fake news which started the escalated role of the United States in Vietnam. And, were you to actually count each time this wicked assembly successfully finagled the deaths of US service members, a list of near 100% failures militarily, and otherwise, would cause the kind of outrage which it should, all things considered.

While it remains too easy to suckle at the familiar comforting teat of faked news, however, voices like mine just have no place on earth in which an honest living can be plied from writing.

But for as long as we are content to eat that shit, then the press will be prepared to create the spoons with which they shall shove it down our collective throats. But the end of time cannot be far-off: these people are terrified of the very freedoms which enable their trade's creative shunning of accountability, lest some nation of fools use it to singe the lingering doubts as to their innocence as he or she finally turns that non-sense off, and considers the earth if we whom lived upon it were left to think for ourselves.

They think that terrifying. Do you know why that is?


Not withstanding are those many cases whom I did not mention. The fact is, big media corporations operate behind the shield of First Amendment protection. This means that, because they will lie, like the weapons of mass destruction in Iraq, or the Tonkin Bay, they, too, must be taken with a grain of salt. Also, and as unfortunately, so must I.

Email ThisBlogThis!Share to TwitterShare to FacebookShare to Pinterest
Labels: Big Media Liars, Fake News, Publications and Networks we cannot trust, the Bilderberger Control of US media, Truth in media