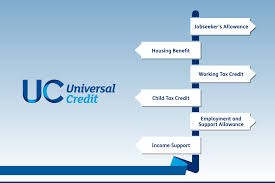 In the UK, Universal Credit is the name given to a system of entitlements and benefits affecting relief for the poor, the unemployed, the impoverished, all of which were once assigned to six separate entities. The resulting attempt at streamlining costs, as well as consolidating and simplifying services, has come under fire in Britain for any number of reasons. Both the old programs, and Universal Credit, all come under the Department of Wages and Pensions (DWP).

UC represents a trend in British Governance emphasizing welfare reform, and consolidating those reforms under the applicant's awareness that Universal Credit will eventually be tapered-off, and the entitlement, cease.
Universal Credit has several problems, from the no-confidence vote given its internal Information Technologies, and the 90% of the IT employees of Universal Credit whom voted this way, to the evolution of paperwork which applies to what was once a more specialized approach. Each of these had an architect, and a forum to anticipate, as well as prevent, foreseeable problems. But what they did not anticipate has the program preying on the anxieties of British people...

Nowadays in Britain, the consolidation of qualifying circumstances for one to seek assistance from the government simply lumps everyone together, and handles the unique needs of injured workers right alongside those seeking assistance due to their status as retirees. The Universal Credit program does more than this: it lumps no less than six formerly independent offices of public assistance into one, giant, jumbled, confused, and in some reports, ineffective system.

The relief which individuals seek, as well as the relief sought by families, as well as the job-seeking younger people and the older ones, as well, have been sacrificed in this generation like sheep, while they work their ways through a perfunctory and an unproven system. They have become the guinea pigs, the first and originally wounded, the forced participants bound to discover the bugs, and either work them out, or far worse, they will find out that the bugs within this new system can never hope to be worked out.

All for a system which was promised to be better, cheaper, which meant a more efficient system, and overall, a system of greater effectiveness. But the year which has passed since the program began to be implemented has been wrought with increasing hardships, incredulity, and in the end, some analysts have concluded that Universal Credit has already proven to be far more expensive than the program the British people were originally sold.

The reception from the Conservative Party for Smith's bold annunciation of Universal Credit in 2010 was understandably optimistic. Smith had long-been a welfare-reform advocate during his ascension from soldier of the eighties, where he had served in Rhodesia and Northern Ireland, to his inability to clinch a berth in 2003 as PM due to what some had perceived as his ardent Catholicism.

But the blessing of Margaret Thatcher did grant him a term as the head of the Department of Wages and Pensions, with the Cameron administration. A term which combined his advocacy for welfare reform with the opportunity to make it so. His view of the system as it was then, and in his words, "expensive and complicated, and unfair", was that it wasted manpower and exposed the system to potential fraud due to a lack of oversight in the thinly stretched apparatus, which could only catch fraud after it happens.

In spite of the cheerful inaugural speeches of 2010, the system has done little to please the people whom it most affected: the recipients, themselves.

Everyone from Occupational Psychologists to the advocacy group Citizen's Advice has lodged a growing list of concerns with UC. These complaints include a new bureaucratic expectation of the citizens of Britain to perform the implausible 42-90 day waits after being approved for housing and food assistance, to the observation that combining systems into one pathway will accomplish exactly the opposite of consolidation, and the costs of operations shall inflate annually, accordingly.
But one thing that nobody wants is a new system.

Those whose cases are still being assessed under the old program, so-called, "legacy recipients", are the most troubled by potential reassessments per the criteria of Universal Credit. For example, families assessed for entitlements under the old system shall now lose €2400 annually if they have one child, and as much as €2600 for those with three, or more. To a struggling family, this is a substantial loss-of-income which has been described as, "a back to work incentive" when, in fact, eligibility would be under entirely different criteria for non-employed recipients.

And it gets worse, as receipt of entitlements are threatened by hours being increased, for example, prompting some recipients to avoid the conflict by finding it cheaper not to work, as the wage is less.

Some people wait 60 days from approval dates, some wait less: but after being approved. This idiosyncratic fact has the UC advising families that are waiting that they should try their luck at food banks.

That people are anxious is an understatement. But UC authorities having to be forced by UK courts to admit that internally, problems which should have delayed the program, or cancelled it altogether, were both known to its planners, and routinely ignored, seems conspiratorial to recipients. The results are that the problems with the UC's Information Technologies networks, for example, are magnified to the point of seeming to be so impairing that they have had an impact in terms of human tragedy. The consolidation should have been mostly in this area. But, as it turns out, the area where most of their efforts went, to the on line application process, is relatively wasted as poor people don't have WiFi, or computers, for that matter. This is a prime example of ineffective rationale plaguing the program, currently.

Where Do We Go From Here?

The fact is suffering is going to happen, and under the best of conditions, institutionalizing relief will be somewhat dehumanizing. But trying to conceal the stunted view of impoverished life, in its bombastitude, and its bias, and in the internal documents which UC still refused to relinquish only serves to feed public anxieties even more. And the troubling fact is that any person anywhere may someday be forced to rely on public trusts like these in order to live.

But the very unyielding circumstance which places a person at the mercies of these programs should be eased by these programs, not constantly reminded that he or she has a very little bit of time to enjoy the little bit of money that they are eligible for. And, on the other hand, people's fearful compliance ought not be for sale, nor should they be penalized for working an extra hour.

The reality is that fractional reserve banking has wasted an entire generation of people. Now, the answer isn't Universal Credit, the answer is options. Education, livelihoods, professions, and compassion. But not confusing the needs of a paraplegic with those of a needy family. And this is the least harmful thing UC, in jumbling them all into one house, shall do.
at June 25, 2017

Email ThisBlogThis!Share to TwitterShare to FacebookShare to Pinterest
Labels: The Problems With Welfare in UK, UK, Universal Credit, Welfare Reform in UK