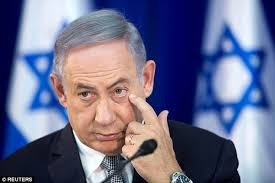 The case against Netanyahu, the architect of 9-11, and the source of the annihilation of Syria, goes by the name of Case 1000. That is what Israeli police are calling it. It is an allegation of a dynamic pay to play favors for a couple of very rich inner circle jerkers. Though both are foreign, one Israeli-American, and one Australian, the police are in the final processes of possibly indicting Netanyahu. For those of you with a memory, this process extricated his former partner in crime, Ariel Sharon, from power in near identical fashion.

The recent defiant stand by Netanyahu against UN is only the demonstration of the force-of-habit blended with his ultra murderous logic, which only seems natural that his wicked plans for causing even greater harm should be completed with the world he has lied to and stolen from in perpetuity cheering him on....what's this...NOW the world decides to muzzle his violent aggression?

Netanyahu's world, to be fair, should already be over. His views are just too sociopathically pro-Jews, and with the exceptions of those that bribe him: he hates all other people, in particular, those whom he and his kind stole their nation from.

The Balfour Directive provides proof that the Rothschild family, the architects of EU, and Globalism, and it only gets worse from there, did, indeed, pay the British government to favor the formation of a modern Jewish state following the First World War. Though they had to wait, the belief shared by a majority of people, that god made that happen, names "god" as "British Pounds", and I don't think there is much money cannot buy, but I know resurrection is not anywhere on the list of things money can buy.
https://www.google.com/url?sa=t&source=web&rct=j&url=https://en.m.wikipedia.org/wiki/Balfour_Declaration&ved=0ahUKEwid5aT_kLjUAhWINSYKHdGEAOEQFggeMAA&usg=AFQjCNGDt-W4c85yNcNvhLqlRd7Jypqvww&sig2=BTpbs1f5vSufxGuAKv1aow
Indeed, such a state secret it was to UK, that they were shooting each other, and its intelligence services defying its own blockades, to both pretend to abide the initial UN blockade preventing this modern plague on man, and somehow keep their deeds hidden, until the UN agreed to a two state solution. And this is the point of contention sticking in the UN's throat. Though compelled to accept Israel's existence, it has become abundantly clear that the world is unable or unwilling to stop this disease from truly murdering every gentile in the Occident. UN is unwilling to accept a one state, much less, a Likud party designed one state, of Israel.

The Case 1000, among other things, does resemble a Nikud (enemy) partisan attack to dethrone Netanyahu's Likud Party. The reason is that the Nikud party is beholding to the damage, and to the millions killed, including the victims of 9-11, by Netanyahu's view of the world. And they would like his party's more than thirty year lock on power to desist, before they lose many more friends.

And Trump, being an idiot, knowing he called the architect of 9-1-1 his friend, did show a peck of respect for those whom perished that day, and has again stated that Israel must comply with the UN's authority: which it has not. Trump knows Netanyahu had a personal role in the attacks on 9-1-1. And this by secrets obtained during counter-intel measures made by an FBI inquiry still not yet public, which has proven to three different presidents whom it was that actually carried out the 9-1-1 attacks. Yet, Trump tries to appear to be unyielding in his support for his "ally" in an aggressive and negative pursuit of the image of a"loyal and strong" comrade. Instead, he is coming across confusing, convoluted, and wishy washy...

The Israelis are in violation of UN Resolution 2334, and, NOBODY has been allowed to violate the UN for this amount of time. The message is clear, US Law forbids Trump's mad-image doctoring in regards to Israel, and from all outward appearances, it is getting closer and closer to removing Netanyahu from power only seeming to be coming out of the Nikud party.

The investigation is, in fact, a covert effort being carried out by the very hands which created Israel, subsequently providing an international obstruction to peace: the US, and the UK. And if it doesn't result in his resignation, or a PM willing to abide the terms of the agreement, then it is only fair airstrikes and war against Israel by the nations of the UN Sec Council become necessary.

The apparent length of the investigation should cease giving Netanyahu's defiance of UN a pass...

For the US, this is the first-ever possible vote against an ally with this much passionate defense in the country, but that didn't matter when the US bombed Serbia, nor intervened in Somalia, and twice in Iraq. If the US drops the ball here, the sole reason for its existence on the Security Council comes under fire, as the US has been the firer, and not the firee. This completes the doctrines and analysis criteria which gave the US profile in the UN such high status during the Cold War bipolar world, in which the US judged so many so violently, as well as relatively unchecked by the USSR, the only other superpower.

Now the integrity of the American role in the UN, which it has historically enjoyed, must come into the very first test of both UN and US in the multi-polar world. This means that the high profile and identity that the US has enjoyed in the UN has come full-circle in terms of that international organization's vitality.

The hypocrisy about our Israeli "ally" stirring the pot of worldwide grief on a daily basis has no room left to breathe, and doubt is slipping into an economy of extreme short-supply. The UN must act.
at June 12, 2017