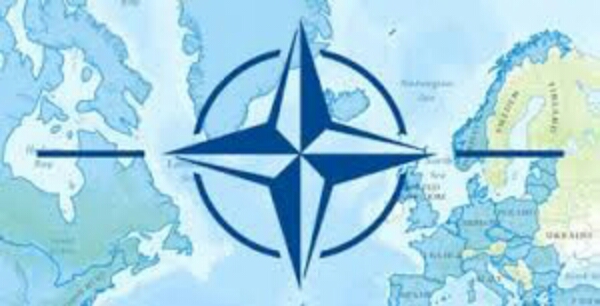 "The North Atlantic Treaty Organization was created in 1949 by the United States, Canada, and several Western European nations to provide collective security against the Soviet Union...." -US State Dept on Nato

The existence of NATO is one that is very troubling. The fact that its mission was fulfilled in 1991 seems to be simply glanced over by globalists as they ferment their war making humeurs with the persistence of needless military hardware, and via a manned military occupation on the part of the United States that is currently vanished due to Clinton-era draw down budget redirects.

There were over 3.5 million US troops in Europe during the peak years of occupation, which are the years between NATO formation, and the ensuing draw downs, 1949-1996. By the end of the nineties, there were only 50,000.

Men whom had committed crimes like murder and rape were sentenced to a Federal prison in Mannheim. There were permanent civilian employees from the US teaching school and healing wounds, and selling cars, and vacation packages. The large American civilian population more than doubled the active duty military service members. Americans that had been stationed there retired there, and routinely sought medical care from the military installations which were ubiquitous throughout Europe. American products were flown in, American milk and margarine for those whose tastes defied that of their host nation. This was a world...but that world has gone.

There can be no mistake about it: NATO has fulfilled its mission, and should be dissolved.

Without the gory details, from 1949-1992 the world needed NATO. To quote the former mayor of Erlangen, West Germany, when he shouted through a bullhorn at protesters whose resentment of the heavily garrisoned Bavarian countryside spilled out onto the streets of his city, "Those tanks can have either a red star, or a white star: at least the ones with the white star will allow the right to protest, even defend your right to do so!"

There is no question that Communism was too repressive and too ideological to actually present a free society, or even a successful one. But, on the other hand, the corruption and many examples where equality doesn't measure-out in general, but along a wealth-gradient, all serve to frustrate the search for a government whose function suits the realistic needs of its people.
But the founding principles of NATO have been satisfied, and it deserves very real consideration that a less-American centric military treaty be drawn up to take its place.

Besides the omission of Australia, and other "Major Non Nato Allies"(MNNA), the scope of the North Atlantic encompasses less in a world which, via digital media, has grown smaller, and more vulnerable. Recent Wikileaks publications of cyber-vulnerabilities seem to indicate that field armies and vessels on high seas are becoming only one dimension in the expression of power. It is almost certain that any future protracted military engagements shall see the deployment of both anti satellite, anti software, and anti digital hardware weapons systems, and the physical military that recovers the fastest shall retain the advantage.

Unfortunately, due to the highly ratioed scale down, the military presences, as far as the United States is concerned, is that of a lamb to the slaughter. There is no feasible counter-strategy except fighting men, and we just do not have nearly enough on-station to warrant this huge expense. That die was actually cast by the US Congress during the Bush Administration, and subsequently, albeit in a state of protest, endorsed first by Bush, then later fully embraced by Clinton. The latter claimed that a Social Security surplus existed as a result of his clever policy craft, when, in reality, it was money left in place. The money had not been borrowed from the Social Security program under a previous defense budget program which plugged holes in the huge defense spending budget using the Social Security program.


The first test of post Soviet Union Nato was perhaps Desert Storm, an operation which combined the Cold War era of advanced military readiness with a completely politically motivated deployment. Although Korea, Vietnam, and the worldwide US military presence since the Second World War was also arguably politically-motivated, this role should have been returned to each the US-occupied nations after the fall of the Soviet Union.

Meanwhile, the usage of NATO troops and communications systems, in particular, that were developed to defend Europe and the US in the event of Soviet and/or Warsaw Pact aggression, had set an ugly precedent being retooled to fight in the Arabian Gulf, and again and again was NATO to overstep its lines in the name of what could best be called, conclusively, frivolous, and destructive military expeditions. Obviously, an unused weapon is a useless weapon, to quote loosely the parlance of the time.

The realities that NATO was a US funded, and US led war-making, and collective defense force, are beginning to hit home. In fact, the terms of the Nato Charter, that 2% for each member-state's GDP be anted-up for full membership, has never before been demanded for the perusal of any other member- state. The US has fielded most of the cost in terms of men, material, and time. But the fact is that the condition should now become enforced, as the United States needs to be getting out of the business of aggressive warfare driven by the personality (or lack thereof) of any given president.

If we learned anything from ReBush, it is that all of the years the US spent on its Nato commitment, and all of the money, can provide a genuine temptation to any administration which views itself as the main source of Nato, thus feels free to lean on the accord to fulfill any personal military expression of power, no matter how unfounded, nor regardless of a visible lack of clear and coherent forethought.
As this is a significant danger to the whole of humanity, it is best to dissolve the current agreement, and the article amendments which have allowed it to continue to re brand the alliance around a meaningless persistence.

The need for a new arrangement has presented itself time, and time again. The disaster that the US faced in Libya was carried-out by the post Cold War apparatus in-pursuit of very dogmatically creative military doctrines which are neither sound, nor functional. And this resulted in the US and Nato funding of both the Libyan warlord whose betrayal cost the US its ambassador to that nation, and saw the US arming ISIL. And, as a result, for all intent and purposes, no Clinton shall ever again occupy the Oval Office.

A change in military approach also mandates the change in the US presence in Nato. It is basically the increasing profile of technical war-making via digital means, drones, and auto deployed satellite guided munitions. These are weapons systems which are deployable overseas in a matter of hours, and will remain the first choice of commanders due to their fast deployability.

The battlefields of the future are being generalized as trending towards the remote soldier, as in the drone pilot, whom operates his system from afar. The failure to adapt and evolve has historically been unforgiving in terms of war. This was best evidenced by the maddening charges by French and British troops into the German Maxim Guns. This was a Napoleonic view of warfare being hard beaten into the realization of new strategies, this can only have more damning consequences when the weapons of today are considered.

Currently NATO is viewed as the military of EU, this is how Europeans view NATO, and this has been proven in both Serbia, and in the limited commitments by NATO allies in ReBush's golden mistake second Occidental wars. The fact is, an apparent "exchange of bad decision making" has dominated the US's identity in the international organization, and if this trend continues, this is also capable of undermining the accomplishments of the Alliance which were its very reasons for having been created. Right now, the US cannot win a war against Russia, and EU is hell-bent on hanging the blame for it being a very bad idea masquerading as a good idea solely and squarely upon Russia. And this would exemplify everything that is flawed with NATO as it stands, currently. It is in no way nor fashion prepared to engage a conflict of those proportions without it becoming nuclear. And that is not really an alternative.

There is no question that some sort of alliance should exist, but to continue in the antiquated matrix of the very sound doctrines which planned NATO, while trying to evolve and be prepared for coming engagements, is a chink in the armor for the United States, as for all involved.

Then there is the lesson of the Delian League, which allied Sparta and Athens against Persia in the first invasion by the Persians: the persistence of the alliance after Persia was defeated resulted in the first and second Pelopponesian Wars. "We can only be as one when two of us are beaten."

Meaning, no man can serve two masters, both war, and peace. They are not the same.

Email ThisBlogThis!Share to TwitterShare to FacebookShare to Pinterest
Labels: Nato, Nato's Mission Completed, Should be Redesigned