Who Are The Visegrad Four?

Ask most people, not just Europeans, but people, ask them which issue confronting EU member states' citizens is most disturbing, ask, "What issue is the number one complaint facing the people who live in the EU?" Most of the answers are going to refer to the multi-stratified disaster that is the refugee crisis. Americans, for instance, would say the Syrian refugee crisis, because unless they have lived or currently do live there, or are scholars, they are largely unaware of the refugee crisis's etiology, as well as that of each national origin of refugees, because many Americans are come-lately observers of a crisis that actually predates EU. So, they believe that it is only Syrian people causing the row.

The fact is, there are many places sending Europe their refugees. African refugees were once the bigger issue. The economic ramifications, the stress upon medical, coast guard, and affordable housing, and feeding and quartering these people was easier to maintain before EU, because the refugees were simply deported and repatriated. Since the 2014 mass arrivals of Syrian refugees, however, the crisis has become even more unmanageable.

The divisiveness of the refugee crisis itself has more in common to the "taxation without representation" of the US Revolution, than with the manner in which Merkel and crew attempt to overcomplicate the issue with long, roundabout descriptions of how, but it remains up to analysts like me, for the why. How the refugee crisis grew and developed like it has is due to EU bosses insisting on the humanity of the European Court of Human Rights verdict 15 trumping common sense. Nothing, not even EU can ever trump common sense. The why is Social Darwinism.

Statistically Speaking
Although there are projected figures glowingly "proving" that, after the first three years, Eurostat, the official statistics gathering effort of EU, can "show" that the $30,000 per year to feed and house each refugee shall decline...but it requires a whole lot of "buts" and "ifs".(note: these figures do not include the cost of the higher educations that Eurostat cites as reason number one for the financial solvency of refugees, nor does Eurostat have nation by nation refugee costs, which aside from being very suspicious, pre-supposes that the refugees will not object to reality, which puts them at the lowest rungs of society. Eurostat also avoids publishing the huge and unique cost to Mediterranean states, whose coast guards and medical facilities cannot operate without a huge financial effort)

These self-manufactured and questionable numbers are constantly cited by EU leaders, as well as the national leaders, such as Angele Merkel, whose madness is, by this point, obvious. But they have not seen the light of reality.

It must bear the question, "why are refugees only going to EU?"
Although technically speaking, EU is not the only group of nations accepting refugees, refugees themselves are not choosing to live in Jordan, for instance, where $3000 per year takes care of one refugee, as opposed to ten times that figure being necessary to pay for a refugee in EU.

And...It's Gone!
Hungary was the first EU member state to question the obvious flaw in Frau Merkel's, as well as EU's, crisis-causing convention-defying logic: "Somehow, less shall feed more, and the middle and lower classes will just like it". And they did so by more than simply identifying it, a four year old can do that. Hungary was the first to take a stand in Strasbourg and Brussels about the madness, and risking sanctions, defy EU. The Hungarians are refusing to abide the EU regulation.

The expense in Eastern Europe to host asylum seekers is the same as it is in Western Europe. The statistics do not change, either, for EU's emerging Eastern European markets. But $30,000 per year is significantly more difficult to come by in Eastern Europe. Verily, the limits placed on coal mining, for instance, by EU regulations significantly affect the vital industry it is to Hungarian workers: and EU insists, via extremely robust financial consequences, that Hungary comply.

Rather than complying with Brussels about refugees, three other nations bearing very similar issues joined Hungary, and together with Hungary, Poland, Slovakia, and the Czech Republic, they united, and became the Visegrad Four.
And it is likely to present the type of functional Euroscepticism sought for by former Italian comedian, and Eurosceptic Italy leader, Beppe Grillo, whose Eurosceptic seat in Strasbourg, once shared by Nigel Farage, was vacated after Brexit, leaving no choice for Italian Euroscepticism except to render it effectively homeless, due to the high price of paying the EU assembly for the privilege of organizing a viewpoint within EU structure.

Most notably, an exemption from compliance with EU policy is Croatia, whom initially refused refugees. But, being a nation to which, refugees just do not wish to go, Croatia doesn't have this issue. Therefore their nation is safe. Unlike Serbia, a non EU member state, which has accepted refugees there in order to indicate good intent with EU. EU has strained its  relationship with Sebia recently over the issue of Ramush Haradinaj, the Kosovan war criminal whose extradition to Beograd remains blocked by EU and French authorities.

You're Not Helping
Among the publicity accusing EU of any number of half-baked immigration points are a lot of bogus claims. Most helpful to EU is the accusation that the member states of Council of Arab Nations, Bahrain, Oman, Qatar, Saudi Arabia, and United Arab Emirates, are not receiving any refugees. All due respect, they most certainly are, but they call them by another name.

This type of rumor's persistence continues to play right into the hands of the Merkels and Junckers whom laugh at it.

Also, that some of these states border Syria makes it patently obvious that this is so. What is true, however, is that the refugees themselves are seeking EU placement. This is due to the economic advantages offered by EU to which COAS nations like Qatar are not dumb-enough to offer, thus fall prey.

Also, not all refugees are from the wars in Syria and the Occident. Predating the 2001 effective date of EU's existence is the giant African problem, and the boat people taxing the coast guards, medical facilities, police and jails, as well as the tax-payers of Mediterranean nations, in particular, Italy. This is the most detrimental example of the bad leadership of EU relegating its citizens, whom remain voiceless as a group of people, into the poor house. Prior to EU, Italian law ruled that these people were to be deported. EU asylum regs remain a source of multiply-stratified areas of devastating impact.
Nations Refugees Originated 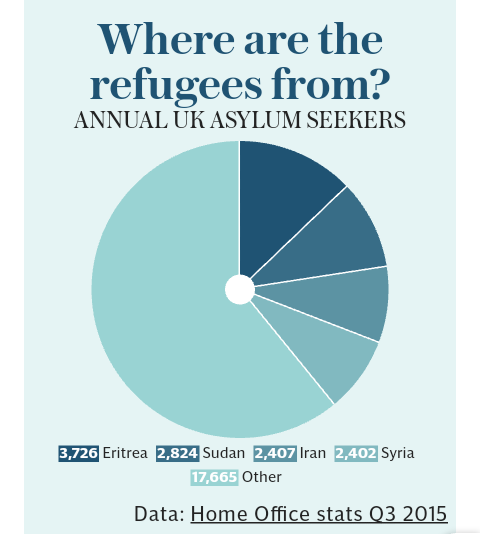